Dreamers vs Parents - Mom Threw Out My $7,000 Monster Magazine 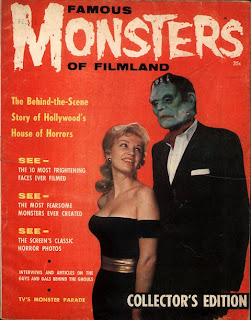 Writer/director and friend of the site Paul Kyriazi was kind enough to share this article he wrote. Enjoy!

Film directors Steven Spielberg John Landis, and Joe Dante were forbidden during their childhoods to read 'Famous Monsters of Filmland' magazine. My friend Tony was caught reading the magazines by his mother. She sent him to talk to their church priest who reported to her "Don't worry. He's okay."

My mother was no different. Even more so.

At age 12 I loved the 1960 movie 'The Time Machine'. I had to secretly go to the theater because my mom wouldn't let me see movies with monsters in it.

I tried to explain that this movie was made from a famous novel and the 'monsters, 'the 'Morlocks', were just a small part of the story. She said no so I sneaked of to the theater to see it. 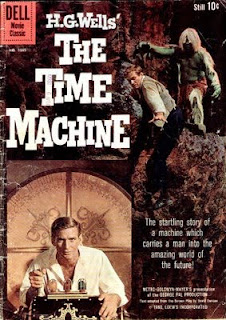 I got the promotional comic book of the move which had a great color cover of Rod Taylor in his time machine, but because there was also a Morlock on it she made me throw it away. (See above photo.)

I wrote to the 'Time Machine' director George Pal for a photo from the movie. This was when no one wrote to a studio. What a miracle, Pal sent me a photo and a letter. My mom found them, tore them up, and thew them in the garbage.

Four years later 'The Time Machine' was on TV and she watched it with me. 'What a nice movie', she said. Aha victory of sorts.

With all my Time Machine souvenirs gone I persisted on getting closer to that movie. In 1977 I got to meet director George Pal. In 2007I hired the two stars of 'The Time Machine' Rod Taylor & Alan Young to narrated two of my novels turned into a audio-books. And my mother??? ......

....... Now we go to Science Fiction conventions together (with my dad) and I point out to her the first issues of the magazine 'Famous Monsters of Filmland' that she made me throw out. They are now ($5000 to $7000 each. Issue #1 pictured above.) And we laugh as she says "Well, we were so worried about you with those monster magazines and movies. We didn't know you were interested in the movies. We worried that you were interested in monsters."

She did help me get into the movie department of college and paid for it. And I ended up directing six feature films and many documentaries. And my dad? We watched 'The Thing' many times and then got to meet the star Ken Tobey and talk to him about it.

And the good news is that I'm still going to movie conventions with my parents. We just saw the new 'Wolfman' together. Violent as hell, but my mom loved it. Go figure?

The moral of the story: Give your parents time to catch up with you.
Posted by Professor Brian O'Blivion at 12:54 AM

Love pieces like this. It's cool to hear someone else (besides me and you) talk about their childhood genre experiences...