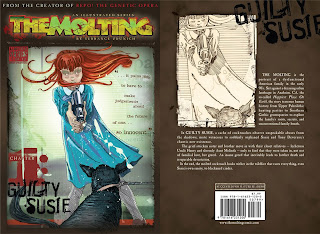 We don't get to choose our family. But who our family is determines certain things about us. Were we grow up, go to school, the people we get to be friends with. The families we get inform these aspects of our lives growing up. Shaping a bit of who we grow up to be. Such is the case in the first issue of Terrance Zdunich's The Molting “Chapter 1: Guilty Susie”. The co-creator/co-star of Repo! The Genetic Opera self-published labor of love opens in Muscoy in the summer of 1961. Anthony and Susana Deveraux are placed in the foster care of their slimy aunt and uncle after the death of their parents. The aunt and uncle just want the money that was left to the children. What happens next to the children out at desolate home of the aunt and uncle will not only have repercussions for the Deveraux children but it will also weigh heavily on the generation to come. 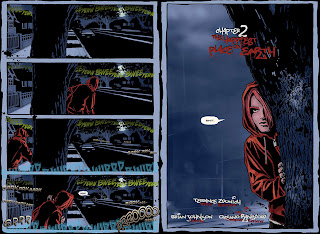 "Chapter 2: The Happiest Place on Earth" picks up in the '90's with Susie married to an aimless husband Abe and two sons, Joseph and Trevor. Susie lives a life very distant from her family. Keeping to herself and occasionally fighting with her husband. The house is also infested with roaches, which become a recurring motif in the following chapters. Her sons try simply to make it from one day to the next. Their juvenile delinquent antics get them in a few tight spots with the law and a local gang in "Chapter 3: Ootheca". In "Chapter 4: Lethal Raids" we're introduced to a recurring flashback of caveman. Not only their violence but also their capacity to be artistic. Joseph's very sexy female teacher takes notice of Joseph's own artist talents and presents him with a chance perhaps develop it farther in an art contest. 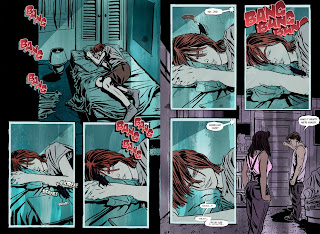 What I truly love about Zdunich's The Molting is the twisted American Gothic feel that's reminiscent of Alan Moore's Swamp Thing run. That sense of something supernatural just under the surface of boring everyday life. We get the sense that there's more to Susie and her Orphan Annie eye then just being emotionally vacant. The way she uses a glance and her voice to influence people's minds around her. From the first issue to the fourth there's a sense of hopeless desolation. Be it in the desert of the 1st issue or the suburban setting of the next issues. The art style and coloring perfectly convey this. But at the same time it's not a depressing story. There's a innocent hopefulness to it. From the brothers, to their father Abe (Who reminds me of Tommy Chong for some reason.) and Susie herself. My favorite parts of the story so far are the times we get to see a glimpse of that bond between this family. Though they are very dysfunctional, there's still a "something" (Love?) that comes out in their interactions. 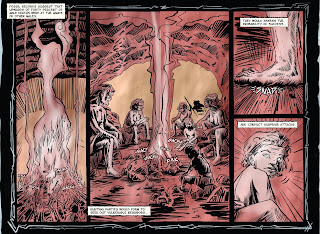 Like I said earlier Terrance Zdunich is self-publishing this and it's a true labor of love. That love comes across in every drawn line and written word. None of it feels like wasted space or filler. Every scene adds to the overall story. I highly recommended it to fans of horror comics and fans of independent comics.

Get The Molting here.
Posted by Professor Brian O'Blivion at 6:17 PM