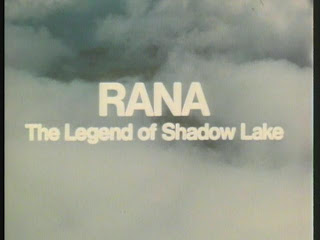 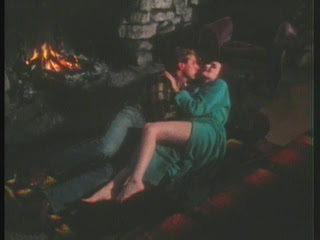 Damn! Damn! I've been ruined and I blame Bill Rebane. See I've watched more then a few of his films lately and... There's a certain cozy charm to them. They're perfect for a chilly autumn evening's viewing. Preferably wrapped in some warm blankets, sporting a groovy 70's design. It also seems I can't watch a movie anymore with out it being low budget, grainy, fullscreen and made between 1970 and 1989. With all that in mind I popped in Mr. Rebane's swamp monster epic. 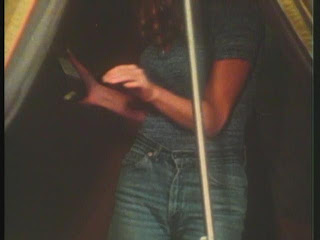 Kelly Jr. has returned to the island were he grew up with his terrycloth robe wearing girlfriend Chris. As the lounge about the spacious cabin he tells her about when he was a child and a female paleontologist Dr. Elli and her niece Susan came to the island. Dr. Elli is there to investigate a strange bone fragment found on the island. Another paleontologist named Sorensen shows up too, but something or somebody kills him off quick. There's also a local legend about some gold hidden in the lake bottom. Legend states that frog creature/god known as Rana guards the gold and kills all that come looking for it. The gold is what three shady men posing as loggers have come in search of. Every movie needs a crazy old hermit/doom sayer and this film has one named Charlie. He mucks around, takes pot shots at the "loggers" and warns people about the monster. 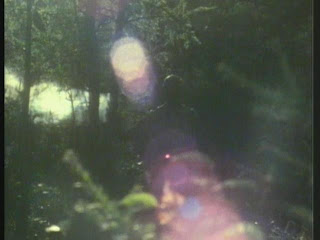 That's pretty much the whole film. Kelly Jr. narrates and once in awhile the film will cut back to them in the cabin. They appear to be making out as he narrates part of the story! This movie is like The Legend of Boggy Creek. Except there's a frog monster instead of Bigfoot and even less happans here then in Boggy Creek. In a few action scenes Rebane channeled Sam Peckinpah. People died in ridiculous and way out of place slow-mo. There's some hilarious bad touch action in one scene when a scuba diving logger gets all touchy feely with teenage Susan. Speaking of Susan there's a great scene were she's rocking out to some tunes in her tent. Was that some sort of ancient iPod she was using? Also worth seeing is the scene were the hermit is talking to himself as he cooks on the stove. He drinks, pours some booze into the stewpot. And in the background, his pet goat tries to climb onto his bed, falls down and tips over a crate. One take mayhap? 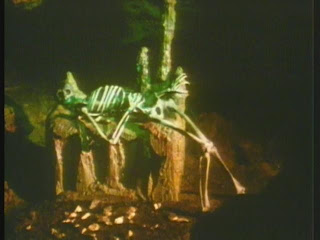 Most people will probably be bored to tears. There's not much action to speak of here and the monster doesn't get more then about five minutes of screen time. But those five minutes are a dozy. So if you're like me and have to see all of Bill Rebane's work or have a hankering for a swamp monster flick, visit Rana. Just don't try to pilfer his gold.

Your reviews are so great! I gotta see that goat! Plus, my new name is Kelly jr.

Thanks, glad you liked it Kelly jr.