EVERYBODY LOVES YOU WHEN YOU'RE DEAD 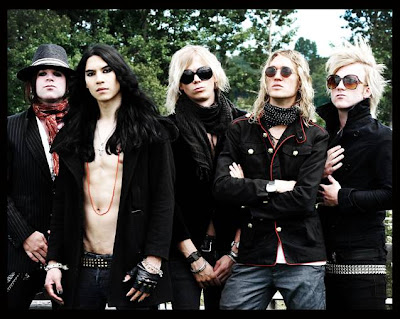 Indrid 13 wants me to let you guys know about...

WHAT: World premiere of "Everybody Loves You When You're Dead
2010 Mix" Video

With a new lead singer and a fresh 'take on the world' spirit
in tow, Los Angeles rockers (via Sweden), Vains of Jenna, are
proud to announce the release of their latest video "Everybody
Loves You When You're Dead 2010 Mix". The song, which was
originally released on 2009's "The Art of Telling Lies"
features new frontman Jesse Forte is currently available on
the band's YouTube site. The video, co-directed by Eric
Sernot along with band bassist and co-founder JP White, was
shot in Sweden between tour dates during VoJ's European Tour,
which led them from Italy, Czech Republic, France, Denmark,
Germany, The UK and back to their former homeland of Sweden.
Additionally, as of September 1st, 2010 a new 5 song EP (on
RLS/Raw Noize Records) has been released on iTunes with the
official hard copy release available September 14, 2010. VoJ
will return stateside for a Fall US Tour beginning October
2nd, 2010 at the infamous "Whiskey-A-Go-Go" in Hollywood, CA
and will be playing shows in Argentina and Brazil in late
October 2010 for the first time ever. In 2011 the band will
release special edition covers release (through
Deadline-Cleopatra Records) followed by another full-length
release of brand new original music and a coast-to-coast tour.

Vains of Jenna formed in 2005 in Falkenberg, Sweden and has performed over
500 shows in 2 dozen countries worldwide since. Originally signed by Bam
Margera (of MTV's Jackass & Viva La Bam fame) to Filthy Note Records in
2006, the band has remained close to their brother in insanity with
appearances on "Bam's Unholy Union", "Jackass 24", Bam's "Viva La Bands
Tour" as well as future placement in Bam's new Spike TV show "Bam's World
Domination". VoJ have also logged miles in support of the Poison/Ratt
Tour in 2007 and shared the stage over the years with Wednesday 13
(Murderdolls), Cradle of Filth, Michael Monroe (Hanoi Rocks), Dizzy Reed
(Guns N' Roses), GWAR and Ducati All Stars (Mark McGrath, Steve Jones,
Jason Bonham). With a 40 date Spring/Summer tour in 2010 under their belts
that spanned across 12 countries in Europe, the band has released a 5 song
EP in September, 2010 (on RLS/Raw Noize Records), will release a covers
album slated for 2011 (on Deadline-Cleopatra Records) and an all original
full-length release later in 2011. The band's line-up consists of Swedes
Nicki Kin (lead guitar), Anton Sevholt (guitars), JP White (bass), Jacki
Stone (drums) and new lead singer / Orange County, CA native Jesse Forte.

Vains of Jenna are proudly endorsed by:

I haven't heard these guys yet and will prob'ly take the time to check out their YouTube stuff... but I gotta say, just judging a book by its cover... there's too many guys wearing scarves in that pic.

You should check them out!