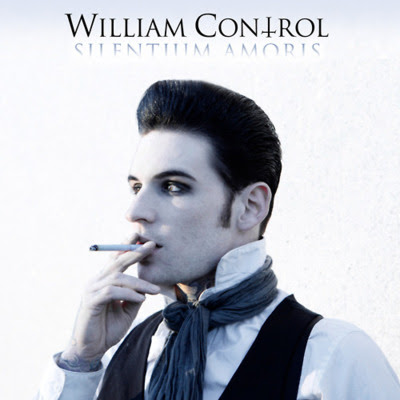 The newest release from William Control derives its title, Silentium Amoris, from the poem of the same name penned by Oscar Wilde. It is fitting that William has referenced Wilde, as the album can be interpreted as a concept piece, dealing with Wilde’s tragic love affair with Lord Alfred Douglas, and subsequently as the tracks unfold, parallels can be drawn to William’s love affair with creating music, and all the strife that accompanies the life of an artist.

The album begins with the track Achtung, a reading from the works of the Marquis de Sade that sets the tone of the album precisely; we must bring our attention to what we perceive as virtue or vice, and through careful examination of both can we find our true selves. As taken as part of the overreaching tale of Wilde’s story, the piece seems to be a mirror held up to the rigid Victorian society; a society that viewed homosexuality as a crime (of which Wilde was found guilty, leading to his incarceration for two years under hard labor), to face their prejudices and antiquated mores.

“We Are Lovers”, details a journey from England to France, much like the Exodus made by Wilde after being released from prison. The piece starts somber and nihilistic; perhaps as a reference to the doomed love shared between the author and Lord Douglas (the aristocrat all but abandoned the author after the affair was revealed). The chorus describes the addictiveness and destructiveness of love, which may also be in reference to William’s love of creating art, no matter the personal (or even financial) toll. The second verse tells of a further journey into Europe, and describes dire conditions perhaps as if the continent continues to suffer for the injustices that have been visited upon the undeserving.

As the album continues to progress the dual theme continues to become stronger, as “Kiss Me Judas” and “I am Your Jesus” enforce the pain that an obsessive love can inflict, and how love (and art) can become a kind of neo-religion (much like the beliefs of Aestheticism, who’s members, Wilde included, held art supreme) albeit based on one’s own creative talent rather than antiquated ideals.

The Velvet Warms and Binds could at first be seen as tribute to sadomasochism (a subject often visited in William Control’s work), but upon further listening it seems to become a testament to how creativity can abuse the creator. The sweet, uphoric feeling of having created art can in turn become a prison, as more art needs to be created no matter the cost (financial or mental). “Letters to the Other Side” further explores this concept of creation as addiction, although this piece appears to be more auto-biographical.

“Come Die With Me” as viewed within the framework of Wilde’s story appears to be the author’s trying to reconcile his two passions, Lord Douglas and writing. The listener is never sure which of the two will take the full measure of the author’s heart, and that is what makes the piece so compelling to the listener.

“Atmosphere” is an excellent cover of the Joy Division classic, and as it fits into this work could serve as Wilde’s pleas to Lord Douglas to not abandon him when he needed him most.

“Omnia Vincit Amor” translates to “Love Conquers All”, and along with its companion piece “Romance and Devotion” (available for preview here:  http://www.altpress.com/news/entry/william_control_aiden_streams_new_song_romance_devotion) explore how love demands absolute obedience to its capriciousness. It matters naught if the love is for a person or an artistic ideal, in the end we become as to slaves to its inexorable draw and power.

“True Love Will Find You in the End” is another exquisite cover from William, this time of a Daniel Johnston song. The song seems to be the crying out of a lover abandoned on his deathbed. Apropos for Wilde indeed, as he died alone and destitute in Paris; his aristocratic lover long since removed from his existence.

“Failure of all Mankind” seems to the listener to be about the remaining legacy of Wilde’s creativity left to be discovered by new generations, long after his body has faded from the world, a world that at first loved and worshipped the man, then left him to rot after society found him to be something they found distasteful. Alas the same can be said of many artists and creators, past and present, and the cycle will continue into infinity. Creators become unto gods, gods which are then revealed to be all too mortal in the end, abandoned by their disciples and left to bleed upon the altar of society.

The album ends, fittingly enough, with a reading of Wilde’s poem. William always gives such readings respect and gravitas, and this track is no exception. (If you enjoy this track, I strongly urge you to purchase William’s readings of selections from Poe’s immortal works available here: http://williamcontrol.bigcartel.com/product/edgar-allan-poe-read-by-william-control)

I strongly urge you to pick up “Silentium Amoris” when it is released on April 2nd. The album can be purchased here: http://williamcontrol.bigcartel.com/. Also beginning April 5th, William will be playing live on the Fight to Unite Tour, details of which can be found here: https://www.facebook.com/thefighttounitetour

Posted by Professor Brian O'Blivion at 12:10 AM