An onslaught of sleeping 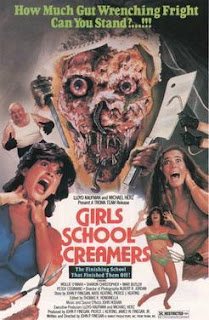 "Don't smoke any of that good stuff without me." 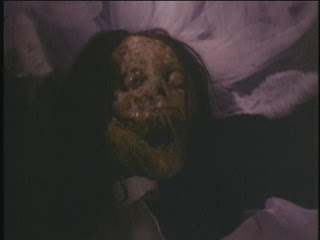 Friday night doing some shopping at FYE I spied this in the used section. I should have know. there was a warning on the DVD practicely screaming at me not to buy it. That was the Troma logo looking up at me from the case. I've had mixed results watching some of their stuff. Some have been fun. Though I haven't seen them in ages, I enjoyed the Toxic Avenger films at the time. And Cannibal the Musical rules. But stuff like Redneck Zombies and Sgt Kabukiman NYPD left me feeling meh. So does Girls School Screamers do the trick? Well... 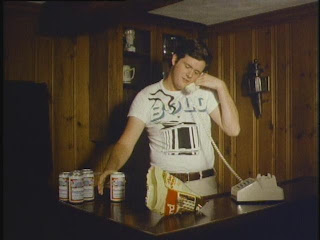 Jackie O'Neil (O'Mara) is attending an all-girls school. Along with her fellow students, Elizabeth Clarke (Christopher), Kate Banning (Butler), Adelle Thompson (Hinton), Rosemary Trikowski (Antonucci) and a couple more girls are given an assignment. Supervising the girls is Sister Urban (Gallagher). The school has been left a mansion by a recently deceased benefactor. The girls are to spend there weekend and catalog the contents of the mansion. While there the girls engage in the usual shenanigans. Hide and Seek! Séances and talk. Lots of talking. Anyway the girls find out about a story invovling the owner of the mansion and the young girl he had the hots for. The girl died mysteriously and turns out that final girl Jackie looks just like her. Well eventually someone or (Need I say it?) something shows up and starts killing the girls one by one. Finally! Will Jackie survive? Will Sister Urban wake from her nap in time to help? Will I wake from my nap in time to see the climax? 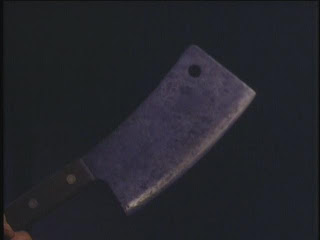 Well I did wake from my nap in time. Actually it was quite the pleasant nap too. So Girls School Screamers, you should have had a lot more screaming then you did. It started fine with a kids dare and a ghostly run-in. Then we got to the girls and the set up of why they were going to this mansion. That was fine too. But then the movie just drags along for a bit with not real horror happing. Just a bunch of talk about the girl that died and some flashbacks. Then with only about thirty minutes left the girls start dying. Now this would be fine in some horror films, building up the characters and what not. But this isn't that sort of horror film. It's a cheesy one and I want cheesiness. There's not much on hand. Plus I didn't really care about the girls. They are intercangable for the most part. with nothing really to distinguish them from one another. A couple even look very similar. All that being said I dug the 80's horror feel and didn't mind my time spent with the film. There's a couple good kills in the film. Plus I had a good nap.