The C.C. Bright Files: A Conversation with Jessica Jolly 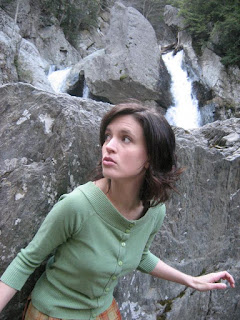 Jessica Jolly is an enthusiastic actress and comedian, who I had the great pleasure to interview recently. I asked her about her career, influences, and her latest project The Three Cases of C.C. Bright.

What was your inspiration to become an actress?

It all started when I was 13 years old and read Shakespeare for the first time. I took an acting class where we did a little play called "While Shakespeare Slept." I played Lady MacBeth. At one point, I got to do her famous speech washing the blood from her hands. After the first performance, I was hooked. And there's been no looking back. I went on to study acting at NYU, and have been doing it non-stop since.

Is there any one actress or actor you'd like to meet?

The actors I'd most love to work with are Frances McDormand, Cate Blanchet, Gary Oldman and Bill Murray. The actor I'd most like to meet? The actor/writer/producer I've been obsessed with since I was 11 years old: Bruce McCullough of "The Kids in the Hall."

What type of films and music do you like?

I have a wide variety of film tastes. I love really intense foreign films like "Oldboy" and "13 Tzameti." But I love fun yet insightful comedies just as much, such as "Rushmore" and "Deconstructing Harry." I also love escapism, so I'm a big fan of sci-fi and fantasy. I can tell you my Netflix recommendations are all over the place.

As for music, I'm a rock n roll girl. My dad is a professional musician, he plays blues and rock n roll. So I've been seeing live music since the womb. I love a lot of indie rock, but plenty of folk, blues, rockabilly and soul music as well. My favorite musicians range from The Pixies to Tom Waits to Billy Bragg.

What can you tell us about the character you play, CC Brite?

C.C. is a spy girl. A self-made spy girl in that she takes the cases on herself. She is afraid of nothing. But she's not made of steel. C.C. is in many ways a very innocent and vulnerable girl. Those contradicting qualities in her are what make C.C. so interesting and fun to play.

How much of you is in the CC Brite character?

C.C. is the type of chick who never sits around waiting for opportunity to come to her, she seeks it out, and creates it for herself. In that respect, we are a lot alike. I don't like putting my success in other people's hands. I've produced my own theater and film projects. If I'm not excited about the roles and the stories that are out there, I write the material myself.

Is there any part of the character that you'd wish you could be more like?

I wish I was as fearless as C.C. I have several very intense phobias that would make me a poor spy-girl.

CC Brite has bit of hand-to-hand combat in it. Do you have any sort of martial arts training?
A little bit. I took plenty of stage combat in college. And I dated a martial artist for several years who taught me a fair amount of self-defense. 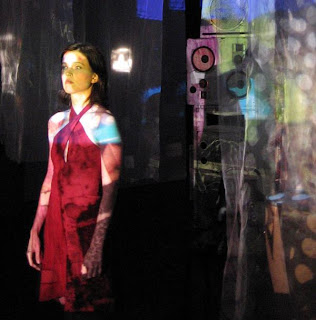 Can you tell us about your character in It's A Haunted Happenin?

Riley! I love this girl. She's a drummer in a punk band (something I'd love to be!) She's also very contradictory character in that she loves punk music, but she wears girly clothes and has no "attitude" whatsoever. She fun and silly and I loved playing her.

What was it like filming It's A Haunted Happenin?

It was a blast! All the women in the cast were so much fun to be around. That was also my first film with Pat Bishow, who of course is now one of my favorite directors and very good friend. He's just an amazing guy to work with.

So what's next for you?

I'm finishing up post-production on the short film I wrote and produced, "Thank You, Mr. Patterson." I'm also performing a lot of stand-up comedy in Los Angeles now, which has become a new love of mine. Stand-up comedy is very rewarding. I do have some film projects in the works, but nothing I can disclose just yet! 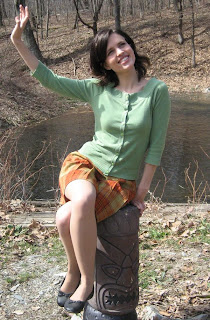 I hope everyone enjoys watching "The Three Cases of C.C. Bright" as much as we enjoyed making it! Thanks for all the nice messages you've been sending Pat and I. We really appreciate hearing about it!

I want to thank Jessica Jolly and Pat Bishow for taking the time to talk to me for these interviews. Get in touch with them at amusementfilms@yahoo.com or on myspace page www.myspace.com/ccbrite.
Posted by Professor Brian O'Blivion at 11:21 PM