Are you asking me to remove my trousers : My Top Fifteen favorite films of the year 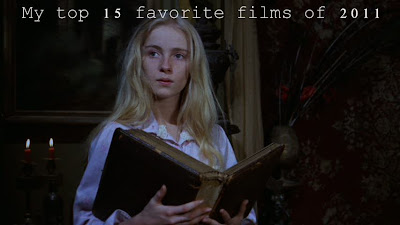 Well as another year draws to a close it's time to take a look at my favorite films of 2011. It was a weird year, wasn't great, but it wasn't as terrible as 2010 was. Even with the ups and downs of 2011, I watched  a ton of stuff. The early part of the year saw me go crazy for kung fu films. I had a Shaw Brothers marathon and a Sammo Hung one. I started watching and collecting Doctor Who on DVD like a madman. Memorial Day I held my 2nd Werewolf marathon. Then I finished the year watching Christmas horror films for the holiday weekend. Like last year the list encompass all the films I saw for the first time this year. Stuff like Scott Pilgrim and Kick Ass, both of which I loved won't be on the list. Why, well those are just too mainstream for this list. Only the weird, crazy and obscure stuff is allowed.

Honorable mention: Hobo with a Shotgun (2011)- Based on an award winning fake trailer. Hobo to me is more a tribute to Troma then it is to Grindhouse films. Anyway you slice it though, Hobo is a bloody good and over the top time.

15-Shadows Run Black (1986)- A cocaine fueled slasher riot that asks the question: Do you like to watch magicians play with their metal balls? And what future star left this film of their resume?

14-Old Dark House (1932)-James Whale's macabre humor is in full effect here. Eccentric characters, a creepy old mansion and Karloff as the bearded and mute butler Morgan. This sucker is deserving of being regarded as a classic alongside Whale's other more well known Universal horror films.

13-The Dark Power (1985)- Lash La Rue is da man! Indian mummies versus a bunch of collage kids, with Lash to the rescue. We actually get to know the kids a bit before the horror starts. The film succeeds on walking a fine line between humor and horror. It all leads up to a climactic whip face off between our hero and a whip wielding mummy. What he didn't know is: you don't mess with Lash and his whip!

12-Kiss of Death (1973)- Funky Shaw Brothers revenge flick starring their resident ass kicker Lieh Lo. When a young factory worker is viciously gang-raped by a group of low level criminals, she catches a  incurable VD ("Vietnam Rose"), She sets out to kill her rapists and gets badass Lieh Lo to teach her how to do it. Kiss is sleazy grindhouse thrills of the highest order.

11-Cannibal Apocalypse (1980)- Cannibalistic Vietnam vets! Lead by John "I'll kick your ass" Saxon.  An absurdly entertaining mix of  Italian cannibal and zombie films and First Blood and The Deerhunter. Only in Italy would they come up with an insane mix like this. 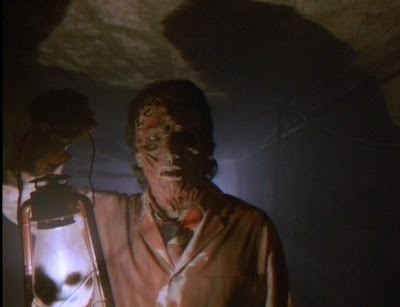 Doom Asylum is dumb and proud of it. The characters are blithering idiots, the killer included. Everyone of the victim's wanders off before meeting their untimely end. The killer's quips are worse then anything Freddy ever let fly. Nobody here is taking it seriously,  it's all in fun. And that helps with the enjoyment. Sex and the City star Kristin Davis shows up as the resident nerd, wearing huge glasses. Cult movie babe Ruth Collins steals the film as the leader of a bad all girl goth band. Plus this film turned me on to the wonderful world of Tod Slaughter. 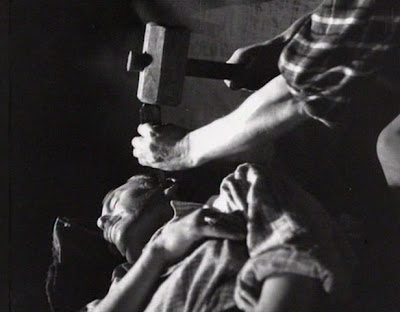 Speaking of Mr. Slaughter. In this film he plays a the false Sir Percival Glyde. Having had murdered the original and taken his place. Slaughter's villains are mustache twirling schemers. The joy of this film and the other films he's stared in is simply seeing him in action. He plays it over the top and completely unhinged. But not in a Plan 9 kind of way. No, there's a knowing look in his eye as he hams it up. He's having a blast and so is the viewer. 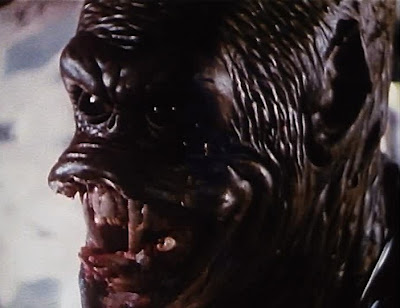 Last year I watched Don Dohler's Blood Massacre. I had to see more of Mr. Dohler's films. They're fun,  well made and have a ton of heart. So along comes Nightbeast, Don Dohler's ode to rampaging aliens in sliver jumpsuits, gentleman's perms and weird foreplay. Nightbeast is what the monster movies of today are not and should be, unabashed  fun. There's that word again, fun. Anyways. I'll never look at sex the same way again thanks to this film. 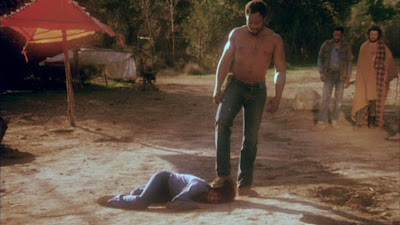 What if Tom Selleck had been the star of Escape from New York? Okay, his character in this isn't anything like Snake, but the story has more then a few things in common with Escape. In the "near" future capitol punishment has been done away with. Instead of prison, felons (men and women alike) are sent to Terminal Island. " There are no guards inside the prison, only prisoners and the worlds they have made. The rules are simple: once you go in, you don't come out." Hey, wait a minute... I have no idea if this film influenced Carpenter or not, but whereas that film is a ultra cool sci-fi thriller, Terminal Island is pure grindhouse groovyness. 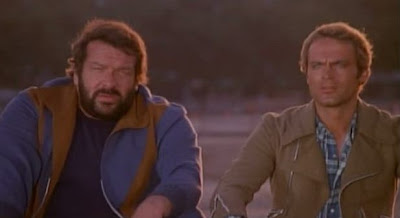 The film that kicked off my obsession with Terence Hill and Bud Spencer. In many ways this film makes me think of team ups of Jackie Chan and Sammo Hung in Hong Kong. Our two heroes mix it up with a crazed mobster and his equally nuts psychiatrist Donald Pleasance! Hill and Spencer mix it up with numerous thugs and killers sent by the mobster. The cause of all this is the boy's trashed dune buggy and their efforts to get compensation from the mobster. Once you hear the theme song by Oliver Onions (Guido and Maurizio De Angelis), you'll never forget it. 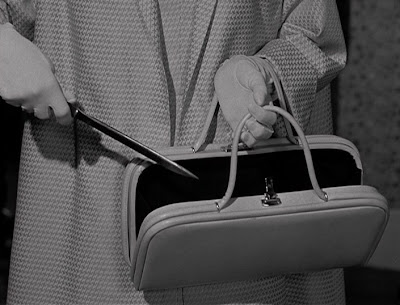 William Castle's little Psycho clone has one thing that film was lacking, a Fright Break! If the climax was too intense, those who wanted to could leave and get a refund. But in so doing you had to sit in The coward's corner in the lobby till the film's end. And then sit there as the other movie goers left. Walking right by you. I wonder if anybody ever did leave during the fright break?  But even with that gimmick, this is one is more restrained then other Castle flicks. It still packs in the thrills and a neat twist ending.

Awesome tale of revenge from the Shaw Brothers. Many kung fu and swordplay films from the late '60's tend to show their age, but man this film doesn't. After watching it for the first time I was shocked to see that it came out in '68. It sure doesn't look or feel that way. There's an energy to it that pulls you right along  with the story. A number of the Shaw Brothers productions from this time as good as they are tend to slow a bit at the midway point, Bells of Death pace never lets up. Early in the film we see the hero track down an old swordsman to train him so he can get revenge. After a brief fireside talk the film jumps ahead years and we see our hero again, fully trained and ready to take revenge! I love that! No five hour training montage here. 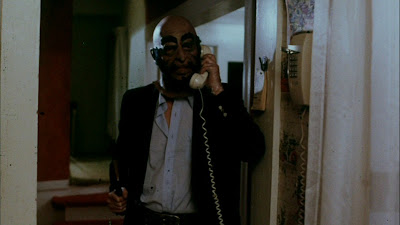 Oh early '80's with your floor model tv's, feety pajamas, plush carpeting and masked killer, was there any better time for horror films? You may not agree with me but I can not get enough of vintage '80's slasher films. I have to see them all, good and bad. Nightmare is one I've been dying to see ever since I saw the trailer years ago. It looked so gnarly. Boy howdy it did not disappoint. It plays like a mix of Halloween and Maniac. A troubled psycho, he even gets a mask, a family being stalked and a horny babysitter! An effective, gory and sometimes freaky slasher gem. 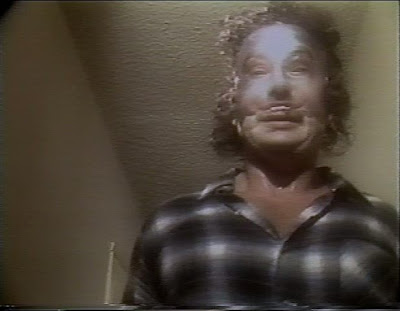 This here is my favorite SOV film. It's tough because I love Boardinghouse loads, but that film is a tad tangential. After a brief murder at the beginning we get some dudes and their "foxy" ladies partying for awhile. After all the '80's hijinks the horror finely kicks in during a ghost story. You know what? I really enjoyed the low rent tomfoolery half as much as the stalk and slash half. The film at times manages an almost surreal feeling do to a creepy looking killer, odd and frequent use of slo-mo and a effective score. But don't let that put you off, this film is also goofy as all hell. 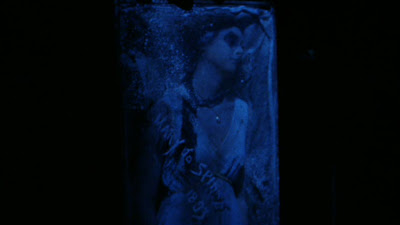 A truly haunting little film that mixes Lovecraft, vampires and Little Red Riding Hood. Like Messiah of Evil, Suspiria and Let's Scare Jessica to Death (Three of my favorite '70's horror films), Lemora creates a  eerie atmosphere that pulls you into it's world and keeps you transfixed to the screen. Cheryl "Rainbeaux" Smith is perfect as young Lila Lee and considering how her life would end it makes her character somewhat tragic. I'm still not sure what the heck is up with the film's ending, but that's one of the joys of '70's horror.

Posted by Professor Brian O'Blivion at 1:21 AM

Looking forward to Nightbeast, I love me a fun monster movie and I've never seen that one.

I am a big Don Dohler fan, have seen Alien Factor, Blood Massacre, Night Beast, Fiend and Blood, Boobs and Beast. I have Alien factor 2 and Galaxy Invader sitting waiting to be watched.
I have covered all the above films in my podcast too. Soon I am even getting to interview the legendary George Stover!
I completely know what you mean about the sex scene in Nightbeast hahaha! but for low budget films made by a group of friends in Baltimore they have such charm, style, skill and a sense of fun that they are irresistible. Good Call having it in your top 15.
I love spreading the word of Don Dohler!

Will-Lemora is one of those films you see that sticks with you. Check out Messiah of Evil, a really great little film that invokes Lovecraft.

AfterMovieDiner-Looking forward to reading that interview. Watched Alien Factor just the other day. Loved it.