The night He didn't come home 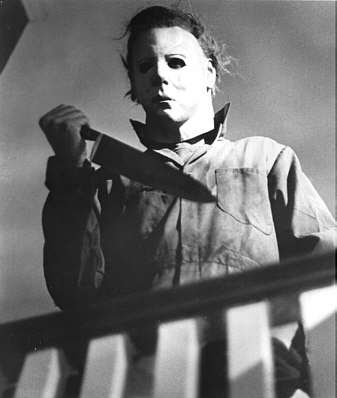 There was a time when the Halloween films were some of my all time favorites. I'd watch them every October. Then this past year something happened... October rolled around and I just didn't give a shit about Micheal Myers and his Haddenfield antics anymore.

Now Halloween is a good movie...but great. I don't know. Now if your talking great horror films I think Night of the Living Dead or The Exorcist. Or maybe Dario Argento's Suspiria. How about Psycho. Texas Chainsaw Massacre or John Carpenter's remake of The Thing which is his best film. But Halloween? I don't know I'm just tired of it. Not the third one though...that's Shape free plus it's got Tom Atkins and Stonehenge.

I'm not saying I sucks far from it and the rest of the series has it's charms. Hell I own them on dvd, even the crummy remake. I've got novels of a couple of the films. Comic books, an action figure and cds of the soundtracks.

Maybe in a few years I'll pull out one of the Halloween movies and pop it in the dvd player and be able to enjoy it. But for now.

I guess what it boils down to is as Mr. Christan Bale put it, and I'm paraphrasing... Me and The Shape are done Professionally. He's a nice guy. But we are through.
Posted by Professor Brian O'Blivion at 4:17 PM