With the invention of Photoshop and the internet, fan-made movie posters are in abundance. Nine times out of ten, they’re poorly slapped together by a rabid fan with little to no image editing experience, trying desperately to display his or her fandom on their deviant art page.

But then there’s that one excellent piece of image editing craft that’s so good, it surpasses the official movie posters. Here’s a few examples. 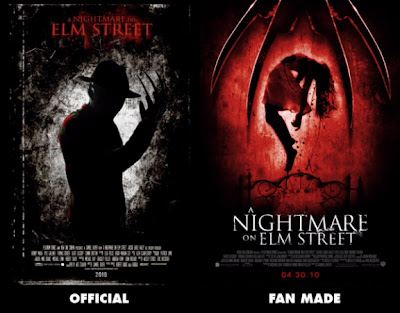 This is an easy one. This particular studio poster for the Nightmare on Elm Street reboot is lazy and uninspired, showing Freddy’s silhouette against a gritty black background. Maybe they thought that an already established franchise didn’t need to entice anyone with a well made poster?

The fan made poster is brilliant. It’s based around an iconic scene in both the original movie and the remake, while Freddy’s claw looms overhead. I’m not sure if its intentional, but it seems to portray Freddy as a puppeteer, maybe because of the power he wields over his victims. 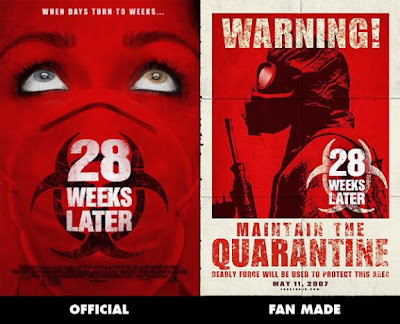 The official poster for 28 Weeks Later isn’t terrible, but a closeup shot of someone’s face is a pretty overused technique. The color scheme is a nice effect, with the heavy focus on the red, but overall it’s mediocre at best.
The fan made poster not only references the military control enforced in the movie, but blurs the line between fiction and reality by taking the form of a warning poster that you could easily see stapled to a light pole in the fictional world of 28 Weeks Later. 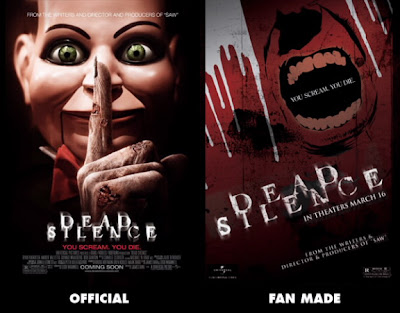 Not only does the official poster for Dead Silence display a close up face shot (albeit of a dummy), it also takes the easy way out. When you think of silence, you automatically thinkg of the universal hand symbol for “ssssshhhhh.” On top of that, it’s a little confusing. What does a dummy have to do with keeping quiet?

The fan made poster forgoes the confusing dummy altogether and instead focuses on the screaming in the tagline. It also uses old-fashioned comic book style art that brings to mind old pulp horror stories, which goes hand-in-hand with evil dummies. 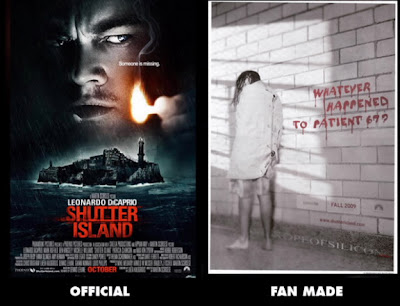 I’m not completely convinced that this fan made poster is superior to the official, but it’s definitely just as good, just for different reasons. Where the official poster is remniscent of the horror stories of yore, focusing on the spookiness of the island, the fan made poster is just downright creepy and focuses much more on plot. For a while, people even thought that it was legitimate, until the studio came forward and denied it. I think the two posters supplement each other nicely.

"Dylan Duarte is a film buff and writer who regularly writes about Halloween
costumes. He can be reached at dylnduarte at gmail.com."
Posted by Professor Brian O'Blivion at 5:37 PM

excellent post! welcome to the Mission, Dylan!
thanks for the contribution!

just wondering... if his email address is missing the 'a' in dylan?

Thanks, glad you liked it! Nope, no 'a' in his email address.