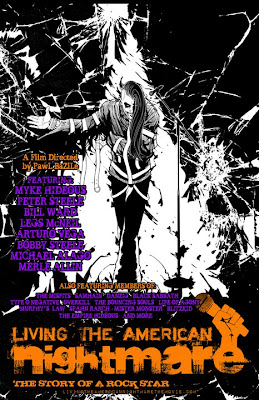 The new documentary from director Pawl Bazile, entitled “Living the American Nightmare” sheds an unflinching eye not only upon the hard road travelled when one dreams of being a successful artist, but what can happen when those dreams are fulfilled.

The film focuses upon multi-talented performer/artist Myke Hideous who has done his damnedest to overcome every obstacle (and believe me, there are unbelievable obstacles this man has faced; everything from addiction to cancer!!) placed in his path in his goal to become a rock n’ roll success story, albeit on his own terms. Operating within the niche musical genre of horror based rock n’ roll, Myke became an icon within the scene (especially on the east coast). From his days fronting The Empire Hideous (whose controversial stage theatrics including self-mutilation cost them an important record deal with Roadrunner records and a touring slot with Type O Negative, whose members, including the legendary late vocalist Peter Steele, are interviewed extensively in the film) to his work with Overkill bassist D.D. Verni’s side project Bronx Casket Company, Myke has always been teetering on the cusp of stardom.

Myke finally receives the chance of a lifetime when he is asked to join the godfathers of the horror punk scene, the Misfits. Learning an incredible amount of material in a scant two weeks, Myke embarks upon a legendary series of dates with his (and as anyone that knows me can attest, mine as well) idols. Facing unruly crowds and sudden alienation from his band mates, Myke still manages to give electrifying performances in front of some of the largest crowds the band has ever played in front of, only to be let go when former vocalist Michale Graves returns to the band.

Throughout the film, you get the sense that Myke considers himself a failure, although I would wager that anyone watching the film would disagree wholeheartedly. Myke has an incredible track record as a creative tour de force having done everything from fronting three radically different bands (the goth influenced Empire Hideous, the more rock based Bronx Casket Company, and SpySociety 99 which recorded material Myke originally conceived for the Misfit’s follow up to 1997’s American Psycho), to touring with the most popular band the genre has ever produced (rivaled only by Glenn Danzig’s solo endeavors and close behind, Type O Negative),  to creating a vast body of illustrations and paintings (not to mention beating cancer, and overcoming substance abuse).

Living the American Nightmare is touching, poignant and insightful as it examines the life of a man not dissimilar to anyone hoping to make a name for themselves (as well as a living) within the arts. I could relate to Myke’s struggles as he held onto a dream and aesthetic vision even when things went irrevocably downhill. The film concludes with Myke making an exit from the music scene, but one is left with the feeling that his journey has only just begun, and after getting to know more about him, I’m anxious to see where that path may lead!

To find out more about Living the American Nightmare go here: http://livingtheamericannightmarethemovie.com/

by Daniel Th1rte3n
Posted by Professor Brian O'Blivion at 7:26 PM