The Sounds of Terror: An Interview with Dante Tomaselli 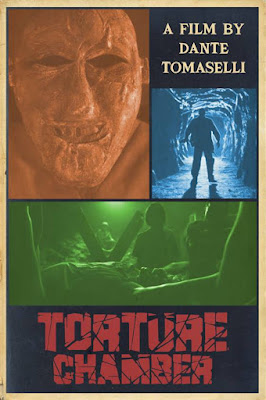 It's been awhile since I had the privilege of interviewing director, musician and good friend of this very blog, Dante Tomaselli. As part of my anniversary celebration I caught up with Dante on what he's been up to since finishing Torture Chamber.


Since we last spoke Torture Chamber has come out. How do you feel about the finished film?

I was disappointed by the cover art the distributor slapped on. Vivendi Entertainment originally bought Torture Chamber but then a lot of their titles were sold to this other distributor, Cinedigm. Thankfully the film transfer is solid. But this company, Cinedigm didn't involve me in the process of choosing the cover art. I was very upset when the DVD was first mailed to me. The cover...awful. Plus it had nothing to do with the film. I mean, if I saw this while scanning titles at a store I would pass over it instantly. So even I - the director - wouldn't have seen my own movie!  As far as the film itself, if I look at Torture Chamber as a mood piece or ambient horror film...I think it works pretty well for its low budget...although it might be too droning. The story is told through a series of dreams, flashbacks and hallucinations. When I experience Torture Chamber through the eyes of a person who doesn't necessarily enjoy non linear rides, I can see all its flaws crystal clear. In the light of day, I can see there were some pacing issues and some of the characters...cardboard cut-out...I can now understand what the film lacked and probably what was lacking in my past projects too and that is...flesh and blood characters. Real people we can root for and identity with. Stephen King has a knack for that. Most of my characters are more like dream symbols than real people. Maybe that works for a small cult audience craving a bizarre sensory experience but if I ever really want to expand on my vision and grow as a storyteller and bring my style to a wider audience, I need to relinquish control in the screenplay department. That's why I brought on a seasoned writer, Michael Gingold as co-writer for my next upcoming projects. 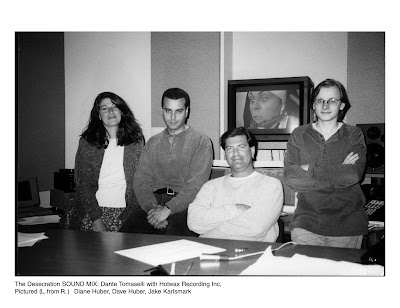 Besides directing you've made four albums. Can you tell us a little about what drew you to make music?

Well, I moved from the NYC/north New Jersey area to south Jersey. Actually I moved on the day of Hurricane Sandy which was on my birthday, October 29th, 2012. Everything was flooded. There was so much damage everywhere...cars floating in the streets. A rollercoaster halfway in and out of the ocean. It was almost apocalyptic. And I remember committing to myself that I was going to take piano lessons and get back into music. I was ready to devote all my energies to music. Once the storm subsided, I walked right into the first music store I could find...Royal Music in Toms River and asked if there was anyone who could give me piano lessons. Growing up, I always played an instrument...trumpet, guitar, little casio keyboards but I forgot how to read notes, read music and I wanted to learn again. At the music store I met Don Olson, who taught me some piano on my Roland Fantom X6 synthesizer. Soon he became my sound engineer and we switched over to the computer where he helped me to sound edit on my own. I scored every one of my films but I didn't physically sound edit them. Sure I told the editors exactly what I wanted but it's different to be the sole person at the keyboard. Now that I had my own home recording studio it was really intoxicating mixing all the sounds and elements on my own, totally alone. I became addicted. I shut the outside world and lost myself in the production of each album.

Your music albums each tell a story. Do the stories start in your head or do they evolve as you create the music?

Scream in the Dark was really my love letter to Halloween soundscape albums like Sounds to Make You Shiver and Chilling,Thrilling Sounds of the Haunted House. Growing up, I got lost in the eerie howling winds and thunderstorms and creepy, thick atmospheres. Also I loved John Carpenter soundtracks—huge influence—­so I decided to create an album of my own. I knew I wanted the listener to feel trapped in a maze-like funhouse during a stormy Halloween night. I designed it so each track is different, a series of moods, like mini-horror films that crystallize in your mind...with titles like Death's Door and Chamber of Horrors. Scream in the Dark was named after a real funhouse from the 70's in New Jersey that I was too young to experience...It existed only in my mind because my older brother and sisters spoke about it in hushed tones. It was supposed to be very scary! I used to play organ music around this time and had a chalk board above the organ and I'd draw haunted houses and fantasize about the interior of this funhouse. All my music is fantasizing...It starts with an image or word or scene and then I score it. I kind of go on a hunt to try and find and re-create the soundscapes that I'm craving. Scream in the Dark was personal because when I was growing up the one thing that made me really happy and tingling with excitement...was the idea of having my very own funhouse. Just the thought of it...the fantasy...released serotonin in my brain. Sometimes I used to create makeshift funhouses with my best friend and a wheelchair and I'd glide the subject in and out of different themed rooms. Scream in the Dark, the album felt like a natural progression...A sonic haunted house. 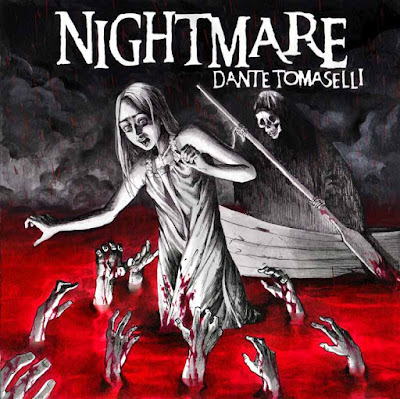 Who are your musical influences?

This might be like having to choose a favorite child, but do you have one album that's your favorite?

Probably Witches, my new instrumental album. It kind of feels like I'm crossing over into new terrain with the addition of William S. Burroughs' inspired 'cut-up technique.'  For a lot of songs on Witches, I purchased actual sermons of cult murderer Jim Jones...I bought these sermons and cut them into little pieces and sprinkled them throughout the soundscapes like magic mushrooms. Also, new on this album is the inclusion of beats and pulses. I used to find it difficult to conjure music with beats since I usually gravitate to a more sprawling, spacious atmosphere but lately I add pulses almost every time. A concert I saw in Manhattan...John Carpenter...really helped shape some of the material. His songs are usually short, tight and punchy. The concert was spectacular...and it was kind of a spiritual experience seeing my musical and cinematic idol perform right in front of me. I even got teary eyed on a couple of songs like The Fog. So many memories flooded back. Carpenter's performance with his band and smoke and background clips from the film...Wow. I was in horror heaven. After that emotionally-charged evening, Witches took shape. 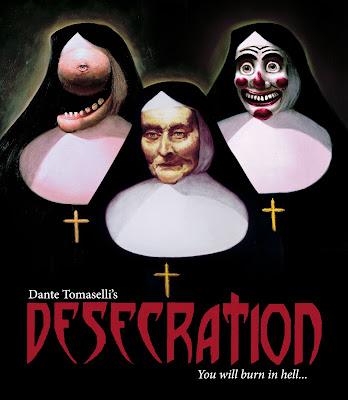 Your films are making their way to Blu-ray. Are you involved in the process of upgrading them from DVD to Blu?

I was totally involved in creating the HD master for Torture Chamber that was sent to the European distributor (Ascot Elite Home Entertainment) when it was released on Blu-ray in Germany. Desecration will be coming out on Blu-ray through Code Red soon and an announcement is upcoming. I worked on the master Digibeta with a post company called WorkEdit in NYC and Chris Morton at ImagiMedia in California took over with the HD transfer. It's culled from a Digibeta master because the Super 16mm film itself is missing. Image Entertainment's 2000 release of Desecration was also transferred from this exact Digibeta master. Bill Olsen at Code Red really really wanted the image to come straight from the film negative, as I can understand...and he pushed for me to find it. A print was made only once...for its world premiere and soon it was gone. I searched and searched and it's just gone. I have an odd theory the Vatican secretly confiscated my nun nightmare around the time it made its world premiere at the 1999 Fantafestival in Rome, Italy. I don't know...Maybe an Italian nun or priest alleged blasphemy over the film's scissor attack sequence where an innocent nun is brutally slashed by a pair of floating scissors. I was very happy that Code Red kept me in the loop with the making of the Blu-ray cover. I was in contact with artist David Levine as he created the cover art image with the strange, glowing nun portraits.

Our last interview was back in 2011. Do you see it as being different now then back then?  How do you feel about where horror cinema is right now?

Horror cinema feels a bit stagnant at the moment though I really admired The Babadook and there are some artists like Chris Garetano, Ted Geoghegan, Larry Fessenden, Jeremiah Kipp, Rob Galluzzo, Adam Barnick, Dan Wilder, John Fallon and Jim Mickle who stand-out. Jim Mickle (Stake Land) actually worked on my film, Satan's Playground in the camera department and I remember he drove me home one night and we talked about horror movies non-stop. Other than that I'm not really sure as I prefer older horror films. 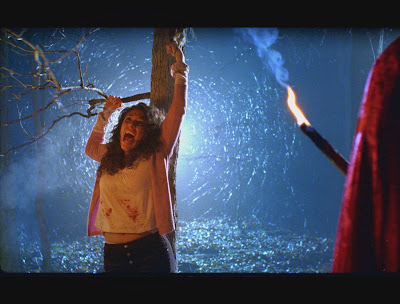 The world now more then ever seems like it's gone crazy. Do you feel we need horror stories as a catharsis for all the real world horrors?

Definitely. This world we live in is very frightening and it appears as if humans are going backwards. Lots of religion...cloaked in evil. There's an anti-christ-like energy...looming...that's all about pent up rage. Nuclear war feels almost inevitable. My films are really about peeling back layers of pain and guilt buried in the unconscious mind. I'm trying to construct a nightmare in which we experience the protagonist's damnation.

Have you ever considered working in any other genre than horror?

No. I'm here for horror. 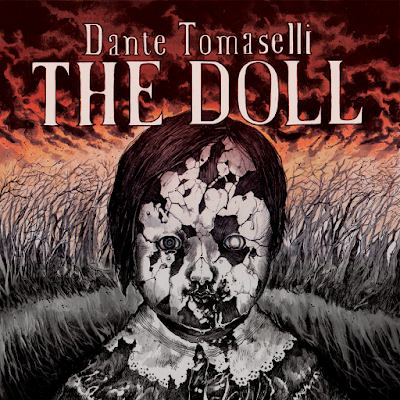 Can you give us any details about your next film The Doll?

It's a horror shocker about a haunting at a family owned wax museum in Salem. Michael Gingold is co-writer and the goal is to make it as scary as possible with its emphasis on supernatural mayhem and an antique porcelain doll. I'm very close to starting production...I just need to secure all the funding. This movie is at my fingertips. I'm painfully pregnant with The Doll and it's violently clawing at my insides.

What would be your dream project as a director?

Halloween. Sequel. Only if I had John Carpenter's blessing, of course. 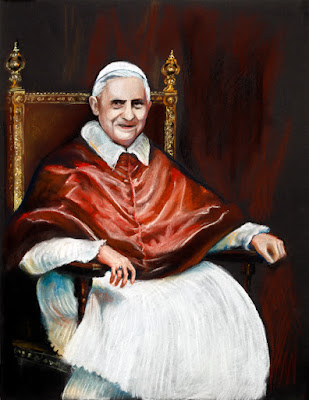 Any parting words for the readers?


For Dante's movies and music head here for sights and sounds of pure horror.