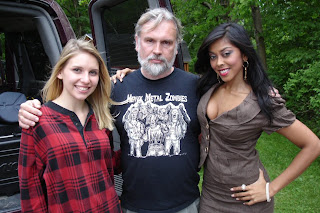 I was introduced to the films of Brett Piper through a late night showing of his early 90’s feature, A Nymphoid Barbarian in Dinosaur Hell on USA Network. From then on, I became an instant fan of his inventive and downright fun features! Recently I had the pleasure to ask Brett about his long career in genre filmmaking!


Let's start with your new film Muckman starring Alison Whitney and AJ Khan from your previous feature Bacterium. This film looks to be an insanely fun creature feature. What can you tell us about the film?

Brett: I think we managed to give people the wrong impression about this film. Everyone seems to assume it's a Swamp Thing style monster movie, when it's actually a more of a spin on shows like Monster Quest. We do have a monster of course, but the story is really more about the people searching for the creature than the creature itself. And it takes a less than serious slant. I hope the fans won't be too disappointed. 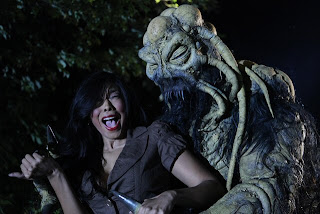 Brett: Hah --- now you're opening a real can of worms. Muckman is my cheapest feature to date, though not so for Mark Polonia. The genesis is interesting --- I was at Mark's house one day and we were talking about how little we might get away with spending and still make a watchable genre movie. One thing led to another and we ended up scouting locations he thought might be good and by the time we got back to his house we'd decided to go ahead and just do the movie. Because we needed to keep costs down we scheduled three consecutive weekends --- six days, tight but doable. The first day's shoot went pretty well. On the morning of the second day I got into an argument with one of the "actors". Thus guy had decided he was not signing a release until his lawyer looked it over. I told him we couldn't waste any more footage on him unless I knew he was committed which at that point meant signing the damned release. The upshot was he and his brother (who was also in the movie) spent the entire day sulking in their car while we shot around them. He finally signed but the day had been wasted. The following weekend both brothers bailed on us. This meant that we effectively lost two third of our six day schedule --- the first weekend we'd wasted with these two bozos and the second weekend which we spent reshooting all their scenes. We needed another four days to finish but there were problems. Everyone had used up the time they'd set aside for the movie. No one wanted to give up but rescheduling was tough. By the time we were done we were shooting everyone separately and editing their scenes together in bits and pieces. So to answer your question: the shooting schedule started out as six days and ended up being five months! 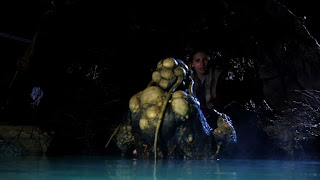 What was the genesis of the ideas behind Muckman?

Brett: The writing process was kind of interesting. Mark and I sat down and hammered out a fairly detailed outline, then we each went off and wrote an entire screenplay. Then we sat down again with copies of our respective scripts and literally cut and taped the two scripts together, picking the parts of each we thought worked best. They were actually very similar. I had changed the opening from our outline but Mark's version worked better so we went back to that. Now I can't remember who wrote what.

Going back a bit, I first became aware of your work through a late night showing of A Nymphoid Barbarian in Dinosaur Hell (Dark Fortress) on USA Network in the early nineties. I taped the film and watched it with my friends, and we all loved it immensely! What can you tell us about the production of the film?

Brett: I remember watching Nymphoid on Up All Night and being disappointed that it was hosted by Rhonda Shear and not Gilbert Gottfried, but I suppose that's a matter of taste. I'm glad you guys liked it. A guy I had hired as an actor on Mutant War asked me if I'd make a film with him if he could raise the money. I agreed and the result was Nymphoid, actually based on a script I'd written years earlier called Dark Sun/Dark Fortress. It was never a post nuke story, by the way --- Troma turned it into one with that prologue they added. The film actually took place on an abandoned Earth outpost on another planet. This was never made explicit but hints were dropped. And there were obviously no dinosaurs in Dinosaur Hell. The movie was made over the course of a summer. It was a pretty good experience --- everyone worked hard and, unlike Muckman, there were no prima donnas to screw things up. The result is hardly a classic movie but for the money we spent it looks pretty good, although the answer print, from which all current copies were made, was a small disaster. I wanted to make the lab do it over but my partner insisted on accepting it because he'd already arranged to show it at a party for the cast and some friends, so we basically ruined (or at least sabotaged) a $40,000 investment so he wouldn't have to cancel his party. Expensive party. 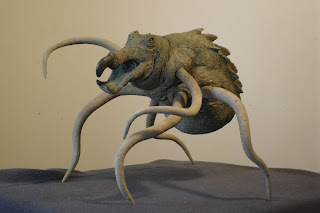 I also adored your feature Drainiac. It seemed like a loving tribute to bizarre 80's horror films, plus it had an incredibly insane finale. Were there specific films that inspired it's creation?

Brett: The move grew out of the title. I thought Drainiac was a cool title so I sat down and wrote a movie around it. The first thing I wrote was the scene of the girl in the bathtub and everything else evolved from that, which may explain why the scene looks a little forced. The insane finale was inspired a little by the ending of Hammer's The Devil Rides Out but much more by the Chinese ghost movies of Tsui Hark. Only one person ever got that --- a woman I knew brought her boy friend, who was from China, to see the movie and he got the reference immediately.

One of the main draws of your features is your use of classic special effects techniques, such as the stop motion creatures of Bite Me! Why do use these techniques?

Brett: When I first started making movies as a kid stop motion was the only way to effectively bring monsters to the screen. Harryhausen was the king and one of my idols. Now, of course, it's all CGI but to me that's only another reason to keep doing stop motion. Stop-mo is an art in itself. A lot of people enjoy it and it would be a shame to have it die out just because of the whims of the Hollywood system. Fortunately I'm not part of that system and can continue to use any technique I want, and my budgets are so low that I don't need to appeal to a huge audience in order to keep making movies. Plus stop motion is just plain fun. I enjoy building the models, I like being a sculptor and craftsman. I use computers to do composites and tweak my effects but aside from that I'm old school and proud of it! I'm the last dinosaur (which was a terrible movie by the way). 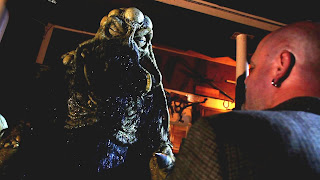 Your awesome website also features an incredible gallery of creatures you have created. Can you give us an idea how you conceptualize your effects?

Brett: When doing dinosaurs and such a little research is good, especially now that science has given us a much more definitive idea of what those animals looked like. For more fanciful creatures I usually have an idea of what I want them to look like as I write the script, and then I do a sketch to size, partly to help me get the proportions right when I build the armature. After that I just wing it, altering things as I go along. That's one of the benefits of being writer and producer and director. It's a very efficient way to work.

Was there a particular film or film maker that lead you to pursue a career in genre film making?

Brett: King Kong. Absolutely the biggest single influence on my life, both aesthetically and technically. I learned how to build armatures by sitting down with pictures of the Kong armatures and a magnifying glass and studying how the joints were made. And it's still the greatest monster movie of all time. 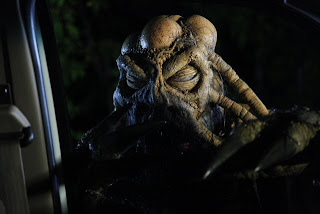 Can you fill us in on any upcoming projects you have in the works?

Brett: Mark and I have got our hands full finishing Muckman of course. After that I have a whole backlog of scripts waiting to be produced. The market for ultra low budget movies is very, very tough right now. The big guys have a lock on distribution and are only interested in pictures that will pull in huge revenues but that'll turn around sooner or later. I think the internet will be a big boon to smaller filmmakers quite soon.

Any parting words for our readers?

Brett: Yeah, stay out of the movie business! It's full of the worst people in the world, liars and crooks of every description. If I had half the money that's been stolen from me over the years I'd be rich. Plus I don't need the competition. (Nah, only kidding, the more the merrier.)

Everyone should stop by http://www.brettpiper.com to learn more about Brett and his amazing features!
Posted by Professor Brian O'Blivion at 3:13 PM

I remember seeing Pipers Shock-O-Rama and loving it for its B-movie goodness. This kind of filmmaking is tons of fun, specially when it comes from somebody who does it because they love it and get the pleasures of watching a good b-movie.

I'm glad you like the interview! Thanks for the feedback!