Do you think we killed nine people for nothing man? 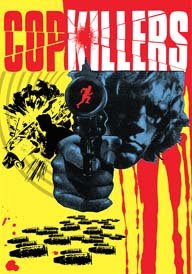 "See that man! That's fuckin' pigs blood. If I was scared it would have been my blood!" 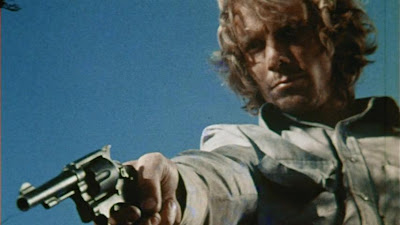 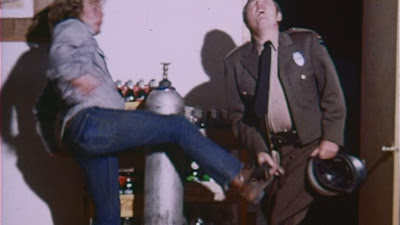 Two long haired rogues Ray (Williams) and Alex (The Being's Bill Osco) hope to make lots of green off the cocaine they scored in Mexico. As they head for the Arizona border the pair are stopped by a police roadblock. Ray gets out of the car guns blazing and kills the cops. Crossing the border they decide to get new wheels. The wheels turn out to be an ice cream truck. After a little beating Ray throws the simpering driver out of the speeding truck to his demise. Next Ray robs a gas station killing two more people. There the duo acquire a new car and a leggy hostage named Karen (Keller) whom Ray threatens with death constantly. More violence ensues. As does a romance of sorts for Alex and Karen. Will Ray and Alex turn on each other? Will Karen escape? And can that hippie's beard get any bigger? 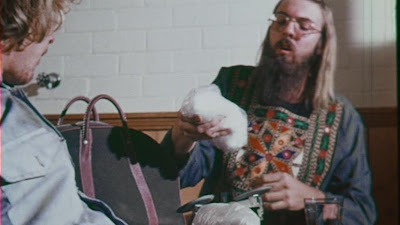 On IMDB the films date is listed as 1973 but the copyright on the end credits says 1977. So this baby must have been sitting around on a shelf somewhere before actually getting released. The "acting" is very much of the porn variety. Brother you haven't lived till you've witnessed the scene with the super whiny ice cream man. Or how about the 'how to snort cocaine' scene. Or the hippie and his two "stoned" chicks. Williams handles the scumbag role very well. Baker's effects are mainly arterial spurts,blood squibs, and some bloody wounds. Much like Last House on the Left theres an uber-inappropriate score and bouncy theme song. Nowhere close to Last House or I Spit on Your Grave level of shock cinema. But is chock full of bad acting. Quotable lines ("$33. Those dudes died cheap.") and drive-in trash appeal.