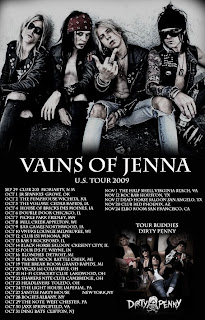 Have you ever witnessed a monumental catastrophe unfold right before your very eyes? Have you ever noticed how some individuals are able to keep it together in the face of adversity to a degree you hadn’t believed possible? I witnessed both of these events occur at Bogies in Albany N.Y. last Wednesday night. I arrived at the club early so I could have a minute or two to speak with Vains of Jenna before the show. I had attended a previous concert they had played in Saratoga a few years back and found the band to be energetic and engaging in ways that few bands are these days. In other words they hit hard with their own unique brand of Sunset Strip inspired sleaze rock. I was really looking forward to seeing them perform again, especially in a more intimate venue. Spirits were high as I conversed with the band and their tour mates, Dirty Penny. They told me of the previous night’s show in New York City, and the fact that they had a large turn out. As I glanced around I noticed that the turn out this night was small. The show was not heavily promoted by the club (a problem that seems persistent with this venue). Also for some reason it was absolutely freezing inside the club. As show time loomed ever closer, I learned that Vains of Jenna were not to be the headliners this night, but instead local act The Erotics were to be the feature attraction. I found this odd, but whatever, I was just going to enjoy Vains of Jenna that much sooner! So the first band on stage was…. local act Untaymed! WTF! They weren’t even advertised as being on the bill! OK. So Untaymed ripped through their 30 – 40 min. set. Next band up? Vains of Jenna! The band begins playing and the crowd was really excited. The band seemed to really respond to the crowd’s energy. They played like they were in front of a stadium crowd, and it was amazing! At least for 5 songs it was. After just 5 songs, the set was cut short by the club, which at this point felt like it was located inside of an iceberg adrift near Antarctica. What in the hell!?! To make a long story short, Dirty Penny received the same treatment. To their credit, Vains of Jenna signed CDs and posed for photos for all who wanted them, but I couldn’t believe what I had witnessed! (Well there was another spectacle I witnessed as well; four dudes who showed up to the show that looked EXACTLY like Motley Crue around 83 or so. I called them Motley Too. They even had a dude that was like 5 years older than everyone else who didn’t socialize much with the rest, just like Mick Mars. It really was insane). So at that point, I said my goodbyes, and apologies, to Vains of Jenna and dragged my half frozen wife out of there. I learned later that the Erotics didn’t play that night. So all in all Vains of Jenna were absolutely awesome, and you shouldn’t miss them if they come to your town. Just pray that your venue treats them a little better than Albany’s did.
Posted by Professor Brian O'Blivion at 4:38 PM

Email ThisBlogThis!Share to TwitterShare to FacebookShare to Pinterest
Labels: by indrid13, CONCERT REVIEW