There is nothing to look forward to...except the fast forward button 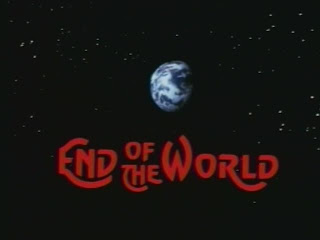 "Some of the films I've been in I regret making. I got conned into making these pictures in almost every case by people who lied to me. Some years ago, I got a call from my producers saying that they were sending me a script and that five very distinguished American actors were also going to be in the film. Actors like 'José Ferrer', Dean Jaggerand John Carradine. So I thought “Well, that's all right by me”. But it turned out it was a complete lie. Appropriately the film was called End Of The World.”- Christopher Lee 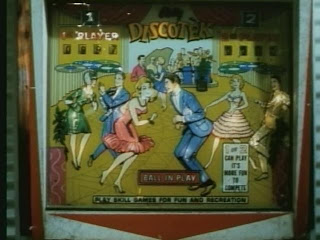 
Christopher Lee dressed as a priest walks into a diner. It's like the start of a bad joke, but sadly it's just this movie. Anyway, he mumbles something or other about needing to use the phone to the man working there who'd been playing a groovy disco pinball game when Sir Chris wandered in. He goes to use the pay phone and then all hell breaks loose. Things blow up and the man ends up getting scaled by hot coffee and killed by a exploding neon sign. Then priest Lee wanders off and meets himself!(?) At a convent in the desert. Right there I was like "Hot damn! This movie is going to rule!" Sadly friends the movie took a serious downturn in kickassness after that. 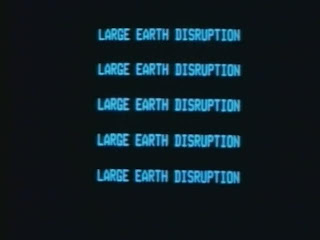 Next we meet Prof. Andrew Boran and his wife Sylvia, or The borings as I like to call them. Andrew is a computer nerd and Sylvia has a job doing "stuff." What this "stuff" is I don't know, because I was bored and contemplating the H.R. 3962 bill and missed it. The Prof. deciphering some signals from space that predicted both an earthquake and a volcanic eruption in different parts of the world, tracks the signals to that same convent that Father Pergardo (Christopher Lee) is chilling with six nuns. Sexy! Andy and Sylvia do some snooping and get the smack layed down on them by a nun. The nuns take them to the basement, which looks like one of Cobra's leftover bases. There's even a big globe of the earth. Turns out Lee is actually Zindar! He and his nun posse are really aliens who did away with the real nuns and priest and took their forms. Andy and Sylvia watch as Zindar kills the real Father Pergardo with their kooky alien device. 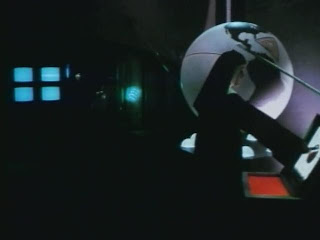 Lee needs Andy to steal some crystal from his job. So they can do the time warp again and get off earth. I'd like to time warp to the end of this film. Andy and Sylvia try to escape. The meet a motorist in the desert. but before he can give our heroes a ride, the poor slob and his car get blown up real good. So Andy with no other choice goes and steals that damn crystal. Lots more stuff gets blown up and he makes off with the crystal. 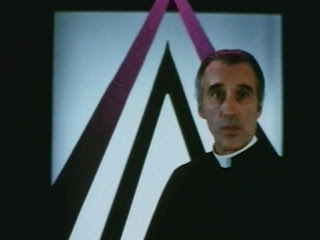 Evacuate? In our moment of triumph?

With the booty in hand Andy heads back to give it to Zindar. There Zindar tells them what he's really up too.

Zindar: The planet Earth has emitted an overabundance of diseases. They are contaminating the universe. All the planets light-years away from here will suffer, unless it is destroyed....We have received our orders. An earthquake in a remote part of China. The eruption of a long-dead volcano. We stopped when we discovered that the restructioning of the Earth was preventing us from returning to our own planet. That problem has been rectified. Your world will end. Nothing can prevent it. This convent will be the last to go. I have set the emergency speed to 200,000,000 kilometers per hour, three times the speed required. We have a direct path. 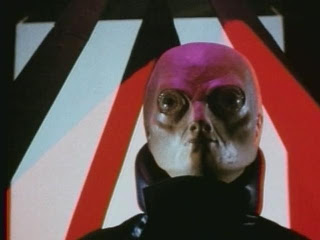 Great. So we're doomed and it's not even 2012 yet! Zindar (I'm going to miss writing that!) and his nun squad go through the time warp thing. Zindar offers Andy and Sylvia the chance to come live on their world. Being that they are dedicated to science and all. So Zindar shows us his alien kisser (It's a real hoot.) and warps out. Andy figures why the hell not, screw our loved ones and the earth. Let's save our own asses. So Andy and Sylvia go through the time warp and earth blows up in a big Dr. Who style bang. 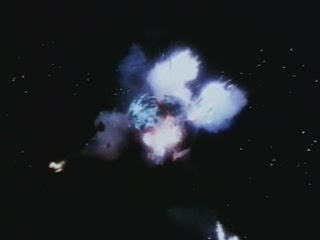 Another one of the buried "treasures" to be found in the Mill Creek Entertainment's Nightmare Worlds set. I knew I was in for a craptastic film going experience when I saw that the one and only Charles Band had produced it. Written by Frank Ray Perilli. Guilty of penning such films as Zoltan, Hound of Dracula, Laserblast, and The Doberman Gang! Not much of anything happens for the eighty some minutes of this film. Except for the opening and closing scenes, the film is a whole lot of Andy and Sylvia walking around. And when they're not walking they're driving. Pretty much throughout this film Sir Chris looks painfully bored. I'm right there with you Chris!

If Chris had read the script he wouldn't have cared how many distinguished American actors turned up. He protests too much too often, if that's not illegal to say about a knight. I only wish there was an "emergency speed" setting on the fast forward when this is on.

LOL, I agree. Mr. Lee complains about quite a few of his films. And there needs to be a higher speed fast forward speed.

So great. The captions are killing me!

LOL, glad you enjoyed them.