Unfamiliar Territory: A conversation with Vagora 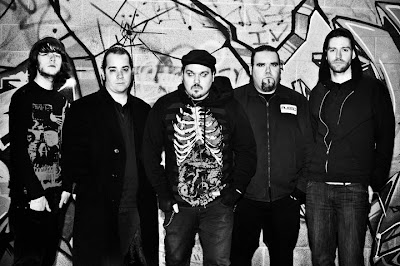 How would you describe the sound of VAGORA to someone who hasn't heard your music before?

Tracy: Well, I think we have elements of several different things going on. There's definitely a strong late 90's melodic punk thing, coupled with some, dare I say it, "pop" sensibilities. Some old school rock n' roll, some emoish tendencies…hardcore, post hardcore, metal and even old OI punk stuff...shoe gaze too. You may not hear all of those elements in every single song all at once, but you will hear them in Vagora's music. Independently or coupled together, they are there. As far as bands that we take inspiration from? The Smashing Pumpkins, Ignite, My Chemical Romance, The Dreaming, H.I.M., Placebo, NIN, Green Day, AFI, Therefore I Am, Quicksand, Handsome, Teenage Bottlerocket...god there are so many.

Pete: VAGORA has many different musical elements. The three major are Punk, Rock, and Experimental. We don't wish to be classified to a single style or genre. Basically we sound like VAGORA, and I'm so proud that I'm in a band that has a sound so difficult for me to describe.

How did the band form, and how did you arrive at your current line-up?

Tracy: I think Pete can answer this one

Pete: The band was originally my girlfriend at the time, Lilith on bass, myself on guitar and vocals, and Jonny Whitehurse on drums. Basically we wanted to make music that we liked because we weren't really hearing anything interesting on the radio. We were really in to punk, especially The Misfits. I think in the early days we wanted to be a horror band, but the music never really worked…it was all over the place style wise. We realized really quickly that we wouldn't fit in one genre.

Bandmates came and went, but Jonny (who has since moved to bass) and I have been there throughout. We met our guitarist Erich Danger on Craigslist. Our drummer, Marcus Hyde, we met through his other band, who we played a lot of shows with. As for Tracy, he dug what we were doing and wanted to be a part of it.

Can you tell us about the writing and recording process for your full length album Agoraphobic?

Tracy: Honestly, the writing process for the songs that eventually made up Agoraphobic was one of the easiest times I have ever had in writing material. Pete had some songs already sketched, and the rest of the band added their colors to them, same with me. Pete and I also wrote a few of the songs together and then the five of us worked them out from there. There was definitely a strong collaborative vibe going on and every week at rehearsal it seemed we were all coming up with new ideas for the songs that already existed, or completely new songs. The recording process, I feel, was a little rushed but that is because we are doing Vagora entirely on our own dime. Inevitably, you are going to hear things that you wish you would've done over again, or maybe the mix doesn't sit well with you now as it did six months ago, but that's just how it goes. It's out there now and people seem to like it regardless of what our perfectionist ears may hear. We've noted what we did, and did not; want to do different for the upcoming release entitled "Nurture".

Pete: Well Agoraphobic was all over the place. You have whole band collaborations, solo song writing, Tracy and I co-wrote for the first time. [Agoraphobic] is a great representation of VAGORA musically. It has a little bit of everything. Recording was a great experience for me as it was my first time in a real studio.

How can fans get their hands on the album?

Tracy: Again, we do all of this on our own, so right now, you can get it via digital download from our Reverbnation page, or from us at shows. We hope to have it available on all of the digital sites soon as well as being able to order the physical version from us at various outlets.

Pete: We will be getting a new shipment of physical CDs shortly. We will set up a way to buy those through the mail with Paypal as soon they come in.


What can fans expect from one of your live shows?

Tracy: Energy, depth and passion…that and constantly running into one another… haha.

Pete: My quote is always "Organized Chaos". We're a tight band, who like to move around on stage. We try to give the crowd everything we have in us every time.


Tell us how fans can contribute to your tour and upcoming second full length album "Nurture".

Tracy: We have a page over at a site called feedthemuse.net which allows fans to donate whatever monetary amount they are comfortable with. It's a great tool for DIY bands, and so far people have been completely generous and we cannot thank them enough. We offer incentives too. If you donate just $5 to us, once "Nurture" is released, you will be able to download four songs for free. For a specific link, our page is feedthemuse.net/vagora

Pete: Well the cool thing about Nurture is that it’s an album that we wanted to make for our fans/friends as its all the early songs we've been playing live for years that people have really wanted to hear recorded properly. So by fans/friends contributing to our “feed the muse” project they actually are backing the band. We couldn't do it without their help. It’s a very intimate thing to know that we did this record with the fans playing such a huge role in it.

Are you guys into horror films, and if so, what are some of your favorites?

Tracy: Haha..this question will be with me until my dying day I suppose. My favorites always and forever will be Dracula, Dead Alive, Halloween 1 and 2, and Last House on the Left.

Pete: My wife and I have a DVD/ BluRay collection that would probably classify us as hoarders in most states. Most of it consists of Horror. I’m more into obscure stuff. I never really watched the mainstream horror stuff as a kid. I own every Troma release, but only saw the original Halloween a few years ago. I really enjoy strange B Movies. I'm obsessed with Ginger Snaps.

Any parting words for your fans?

Tracy: On a personal note, thank you for following what I'm doing nowadays and being so supportive of it. And thank you to everyone who likes what they hear so far. It is MUCH appreciated!

Pete: We will always give you something real, authentic, and direct from out heart.

There you have it! I strongly urge you all to check out Vagora on their Reverbnation page (http://www.reverbnation.com/vagora), Myspace (http://www.myspace.com/VAGORA), or Facebook (http://www.facebook.com/pages/VAGORA/91797693924?ref=ts&sk=info) today! Also be sure to become a part of Vagora history and visit feedthemuse.net/vagora and make a donation if you can!

Posted by Professor Brian O'Blivion at 7:00 AM

Email ThisBlogThis!Share to TwitterShare to FacebookShare to Pinterest
Labels: by indrid13, Interview, Interview by indrid13

I love Vagora, they're great live and on recordings. Can't wait for the new album!

Vagora is such a great band and i will always be there number one fan :) -Catlin :)