Slashing me, slashing you (ah-haa) 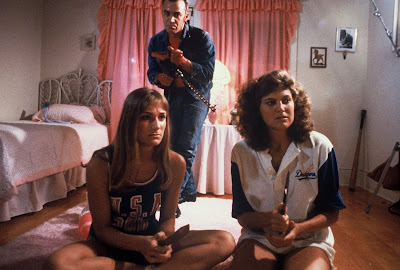 I'd been thinking about a Slasher marathon for awhile know and...Damn! Someone beat me to it! How can you top awesome like that? You can't, but you can sit back, chill with some cool Slasher films and enjoy the ride.

So this weekend as summer comes to a close I'm hanging out with maniacs and scantily clad coeds for a long weekend of slasher hijinks. My criteria for this is that the films have to fall in between (1978) to (1996), why you may ask? Well, because I'm goofy like that. That and those are the years that Halloween and Scream came out. Also none of the big boys are invited to this party.  Myers, Voorhees, Krueger and Leatherface aren't welcome. But your Prom Nights and your Slumber Party Massacres are fine though.

Email ThisBlogThis!Share to TwitterShare to FacebookShare to Pinterest
Labels: movie marathon, The Slashers

I think I enjoyed all of those films, except Sorority House Massacre....