Something a bit different this week. This week we have a Spaghetti Western Fatal four way shootout!
The combatants are four men who are very good at shooting the hell out of the old west. Each man here is a fast draw with numerous and I mean numerous kills. This shootout involves only pistols, no Gatling guns...Django! 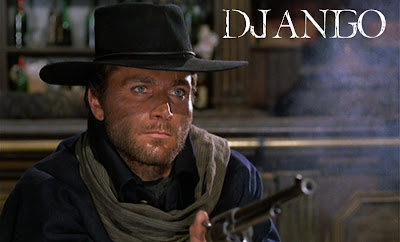 The battle begins at noon on a dusty street, bullets will fly and the music will be awesome!

Last week's winner....It was a tie!
Posted by Professor Brian O'Blivion at 5:41 PM

As much as I love DJANGO - and he does have the coooooolest theme music, as far as I'm concerned - I've learned a long time ago never to bet against Clint Eastwood. In fact, Clint will even coincidentally be making an appearance (in a much different guise) over at Screen Grab's Cage Match tomorrow night!!! So Man With No Name it is.

Can't wait to see that!

Love them all but I have to go with my gut; and if there's one thing my gut loves, it's Charles Bronson.