10 Questions: An Interview with Icarus Witch 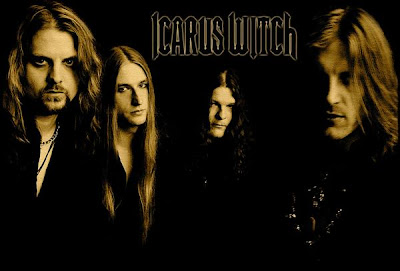 I first discovered the incredible music of Icarus Witch in 2005 when I purchased the Roses on White Lace EP and was immediately hooked by their epic lyrics and classic metal riffs. Capture the Magic and Songs for the Lost followed and continued the legacy of this awesome band. I recently had the pleasure to interview Jason Myers, bass player for Icarus Witch on a number of subjects. Enjoy!

1-First off, let me say thank you again for granting Cathode Ray this interview. Both Shane and myself are big fans of your music! Let's get to the good stuff!
You are obviously inspired by the metal of the past, what would you consider the most influential albums and bands on your sound?

Jason: My pleasure, any chance to wax poetic about vintage metal & horror...I mean it's why we got into this realm. There are so many bands that have influenced us from all genres, too many to list. But some of those band/album combos that have had the most direct & noticeable impact would be Black Sabbath - Mob Rules, Judas Priest - Defenders Of The Faith, Queensryche - The Warning, Dio - Last In Line, Ozzy - Diary Of A Madman, Scorpions - Blackout, Uriah Heep - The Magicians Birthday, Deep Purple - Perfect Strangers, Whitesnake - Lovehunter, Crimson Glory – Transcendence, Rainbow - Rising, Def Leppard - Pyromania, King Diamond - Abigail, Motley Crue - Shout At The Devil, Yngwie Malmsteen - Marching Out, Fates Warning - Awaken The Guardian & pretty much anything from the first decade of Iron Maiden albums!

2-I am reminded of the works of such authors as Poe and Lovecraft when I listen to your work. Are they (or other authors) an influence?

Jason: Absolutely. Obviously with the song "House Of Usher" on our Songs For The Lost album being a direct nod to both the Poe story and the Vincent Price film adaptation, which admittedly is what lead me to the literary version. Lovecraft, what can you say. The man blessed us with such iconic imagery & a unique way of creating not only visuals, but complete worlds and chaotic Deity hierarchies...Lovecraft was one of the first true gothic/metal masters, he simply used pen & paper rather than guitars & amps. I have thought of creating a song based on The Dunwich Horror in the future. But outside of fiction, we're very inspired by actual occult & new age literature. Everything from John Dee, Crowley & Rasputin to LaVey, Gavin & Yvonne Frost and Rhonda Byrne. We try to live a spiritual life and these philosophies inevitably infiltrate our music. 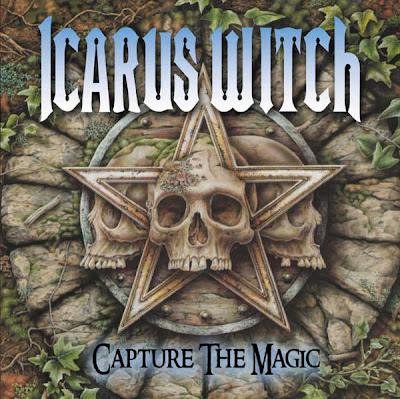 3-How long does it take for an Icarus Witch album to be created from writing to final piece?

Jason: Way longer than it should! [laughs]. We would love to be in and out of the studio in a month, but what usually happens is that the writing process spills over into the recording process, which means changing and evolving as you go. We also end up being at the mercy of odd production schedules, deadlines & unforeseen obstacles. Songs For The Lost took about 6 months to record, and most of it was written as we recorded. The first album was about 1/2 that. The current recording was moving along at a rapid clip, but we've been sidetracked by some outside forces and have been forced to regroup, reevaluate and continue writing until we can get back to the task at hand.

4-Your album covers are always awesome! How do you go about picking your cover images? Do fans ever submit artwork to you?

Jason: Thank you. I've always found album art to be extremely important and right up there with the music in terms of not only selling, but of leaving lasting impressions and broadening the cd owner's experience. With the EP, Roses On White Lace, I happened to be in touch with the artist Matias Noren, from Sweden due to some work he'd done with other bands I admired. He had that one piece with the rose coming out of the skull & it just struck me as perfect for our intro, the whole life beyond death, beauty from decay...seemed a perfect metaphor for the dying genre we were trying to resurrect. The fact that one of the key songs was our cover of Alice Cooper's "Roses On White Lace" was yet another obvious tie in. It just worked all around. For the next CD, Capture The Magic, I had been in talks with the artist Gary Sharpe Young who is best known as a rock journalist creating A-Z guides for his company Rock Detector. I was a fan of his writing and didn't realize that he was also a painter & had created things like the See You In Hell album cover for Grim Reaper & the iconic Queensryche logos & symbols. Turned out he had an amazing painting that he'd never published that was created years ago. When he showed it to me, again it was the perfect follow up to Roses, continuing the growth from skulls theme. It worked on many levels. For Songs For The Lost, our initial choice of graphic designer bailed at the last minute and I ended up doing the layout myself, which involved a lot of all nighters & learning software I'd never used. The image stemmed from a photograph of an Irish tower ruin that I discovered on a photography website. I took the original stark image and worked with it in Photoshop & Illustrator for what seemed like ages, tweaking it, adding layers of subliminal messages, color & nuance until it met every one's approval & felt worthy of representing that music. To me, the tower image seemed like both a refuge from the oncoming storm you see approaching in the background, but also as a fortified, place of learning & practicing some arcane magical work.

5-What is the most memorable gig you have ever played?

Jason: The Headbangers Open Air festival outside of Hamburg Germany. It was our first show outside of America and while most of the crowd may not have spoke English as a first language, the metal was truly universal & the response was so energizing. It was a rush and something we look forward to repeating & continuing. 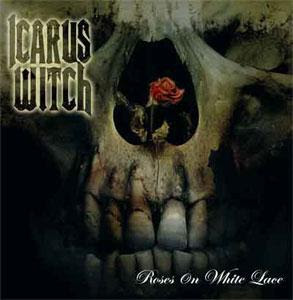 6-Do you find your fan base to be younger kids who are just discovering traditional metal, old school metal purists, or a combination of the two?

Jason: Definitely a mix. The older crowd has been there since the start & is very appreciative that we keep our metal pure without pandering to hipsters or trends. But the increase in the younger scene has been very evident as the last few years have unfolded & it is a very encouraging sign that our scene is not simply about nostalgia, but represents a very vital strain of hard rock that is continuing to evolve without the need to stray from the basic formula.

7-Any chance of you playing the Albany, N.Y. area?

Jason: Absolutely. We hope to be there early 2010 as part of a tour we're working on.

8-Are any of the band members fans of horror films (and if so, which are your favorites)?

Jason: All of us are big horror buffs. We're constantly trading DVDs, or rather I should say, I'm constantly lending them my DVDs. [laughs]. Much in the same way I prefer metal and hard rock from the late 60's to early 80s, this too was the golden age of horror. I love the old Hammer Horror films. The vintage occult pieces like The Mephisto Waltz, Rosemary's Baby, The Devil's Rain, Suspiria. Again, just too many to list them all; Phantasm, Salem's Lot, The Shining, The Fog. The Evil Dead series, the Dawn Of The Dead series, The Lost Boys, Fright Night, The Exorcist series... Every few years or so one modern horror flick will pop up that gets the traditional spirit right. I thought The Blair Witch Project was brilliant in it's simplicity & marketing. I thought Eyes Wide Shut was a glorious swan song for Kubrick. But mostly, I go back & revisit the classics and have been ordering a lot of 60s British horror DVDs from Amazon lately. They always have that balance of class, creepiness & mystique, elements that I like to incorporate in to our bands as well.

9-Any chance of seeing any Icarus Witch tunes in any music based video games?

Jason: Hopefully. A lot of that will depend on the record label & management. We recently had a song of ours used on Don King's Prizefighter video game?! A strange choice I thought since I didn't hear about it until it was already out, but hey, if a few new people get turned on to the Witch while playing games, all the better. No surprise that I prefer the vintage video games as well, like Tempest & Defender, but I'll gladly take a royalty check from Guitar Hero.

10-Any final word for our readers?

Jason: Stay true to what makes you happy regardless of what everyone around you is doing. 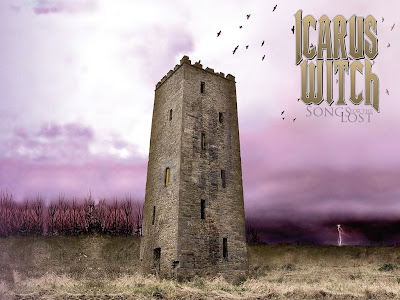 Thank you so much Jason! I strongly urge anyone who loves metal to seek out this bands albums, you will not be disappointed! To find out more about Icarus Witch please visit www.myspace.com/icaruswitch
Posted by Professor Brian O'Blivion at 10:41 PM

Email ThisBlogThis!Share to TwitterShare to FacebookShare to Pinterest
Labels: by indrid13, Interview

Interesting Interview. Icarus Witch are a great band, great sound. Very mesmerizing. They have managed to capture the best of traditional heavy metal while having their own sound and take on the whole thing. Out of the many really good newer metal bands out there with the more traditional metal sound (like Wolf, Pharaoh, Cauldron, etc.), Icarus Witch is one of the very best. Thanks for the interview!