Dreaming the American Nightmare: a conversation with Pawl Bazile 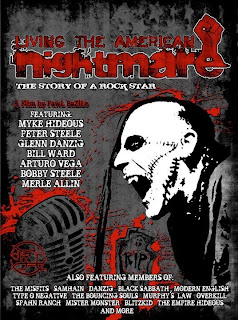 Filmmaker Pawl Bazile is working on a film entitled “Living the American Nightmare” that promises to be a must see for anyone interested in dark or horror related music (or any one pursuing a career in art in general). Pawl recently talked to us a little about the film’s content and the plans he has in store for fans of the genre.

Can you fill in our readers on your new documentary "Living the American Nightmare"?

Pawl: "Living the American Nightmare" is about anyone who's ever wanted to be a career artist... or for that matter, anyone who has ever worked their ass for something and for some reason it didn't happen. Our story focuses on Myke Hideous (Empire Hideous, Misfits, Bronx Casket Company) trying to create a career and a life in the Gothic/Horror Punk/Death Rock/Dark Metal world. If you want to be an artist, you have to be prepared to give something up and get nothing in return. 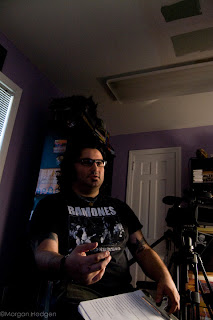 Did you know Myke Hideous prior to beginning the film?

Pawl: First time I heard of Myke Hideous, was about 5 years ago. I was looking up information on the Misfits and came across his name and image. I couldn't believe I'd never heard of him because he had a great look and I wanted to know more. My chick is a model and posed for Myke and we met through that. Soon after I found out he was thinking of making a film and I tricked him.

You have interviewed an impressive array of legendary musicians for the film. Was there anyone in particular that made you think, "Holy shit I can't believe I'm interviewing him!"?

Pawl: Yeah, right off the bat I was really star struck by Arturo Vega, the Ramones art director. "Please Kill Me..." by Legs McNeil is one of my favorite books ever, and Arturo gave an awesome contribution to it. While I was setting up the interview in his loft, I was obsessed with the thought that I was in the house where Dee Dee & Joey lived. I took a piss there and while staring at my stream kept thinking "Every Ramone, (and probably most of the legends from the early days of CBGB's) has pissed in this toilet... and now ME! I was humiliating myself trying to stay cool, and Arturo is a sharp guy, I'm sure he saw through me. 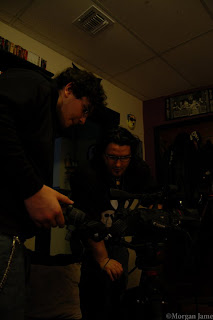 The trailer of the film is really awesome (check it out right here…http://www.youtube.com/watch?v=EgEaZAC9sNs), but I want more! When can we see the finished film?

Pawl: I'd like to think by Halloween, if the film isn't ready, at least we'll have way more for everyone. Part of the beauty of having nothing, we have no one to answer too. And while we have that luxury, and no time constraints, we'll take as much time as we need to make something that we will like now, or 50 years from now. We'll try not to push it with the fans though.

Any plans to have screenings of the film in conjunction with some live performances (not unlike what they did with Anvil)?

Pawl: We sure do. The Undead, Merle Allin's version of the Murder Junkies, and some guys from Mister Monster have already volunteered their services. Blitzkid, and the Bad Whoremoans would probably somehow get involved... I hope we can get one huge "Black Carpet" premier together and make a real Rock 'n' Roll moment for everyone.

I know it's a bit early, but can you tell us if you have any special treats in store for the DVD release as far as special features are concerned?

Pawl: We definitely want to put extended interviews on the special features. Especially in light of Peter Steele's death, we know a lot of people want to see extra interview footage that doesn't necessarily fit into our narrative. Commentary with me and Myke Hideous can be counted on. Extra live performances from any band wanting to contribute footage will also be considered. 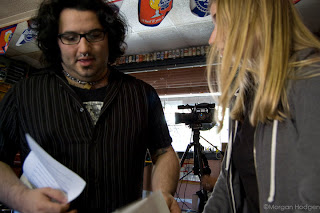 Any plans for merchandise such as t-shirts or a companion album?

Pawl: We will whore whatever flat surface we can write the title of the film on! But seriously, yes of course. First thing that comes to mind for me is we have some phenomenal original poster art from Mike Norse, Andrew Froedge, and Rebecca Cliborne among others that we will make available to the fans as soon as they're ready. Morgan Hodgen has been on most of the shoots and taken phenomenal pictures that we'd like to print out in a book (along with journal entries from Myke and myself). Albums are a bit harder, but not out of the question. Stickers, pins, T-shirts, and whatever else people might be interested in will be available as long as we have worthwhile ideas for them. Of course, any merchandise sold will be used to help get us into festivals, promote the film and have more screenings in more cities. I hope our merchandise sales will be a testament to how alive support of independent art is.

On a more personal note, what made you pursue film making?

Pawl: I make films because there is nothing else I would be happy doing. It’s almost a religious vocation for me, like being a priest. If a priest could see himself doing anything else, he should do that... I believe being a filmmaker is the same. I like telling stories, I enjoy being a God in my own world, creating moods, situations, bringing light to incredible characters the world forgot, fighters, such as Myke.... and let's face it there may not be much else I'm skilled enough to do.

What is your favorite band in the dark rock genre?

Pawl: How can I not say early Misfits? Glenn Danzig is a genus and sublime. I love all of Danzig's work, he is invincible and brilliant in every project he undertakes. He takes risks. I love Black Sabbath. I love Type O. I love Son of Sam & the Undead. Calabrese, Blitzkid, and Mister Monster are totally underrated acts. That being said, if we're going to talk about DARK rock, there is no DARKER rock album in history then John Lennon's "Plastic Ono Band". 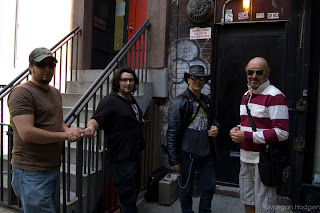 Pawl: Luck is for Losers.

Thanks Pawl! Everyone should head here for up to the minute news on “Living the American Nightmare”…. http://www.facebook.com/home.php?#!/pages/Living-the-American-Nightmare/108951772481461?ref=ts
Posted by Professor Brian O'Blivion at 11:17 PM

Great interview gives me so much more information to help promote