Of Blitzkriegs and Angels: A conversation with Laurent Mercier of Callicore Productions 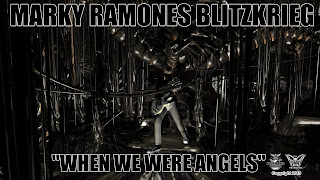 The legendary Marky Ramone has recently unleashed an incredible new musical venture entitled Blitzkrieg (featuring Marky on drums, Michale Graves on vocals, alex Kane on guitar and clare on bass). Now the time has come for the bands first video for the hit single When We Were Angels. The video is being produced by an exciting production company based in France known as Callicore Productions. Read on as Callicore’s own Laurent Mercier fills us in on all the details!

Tell us a little of the background of Callicore Productions?

Laurent: Callicore is an independent production company specialized in animated music video and publishing. The studio recently worked for Arrested Development, John Lee Hooker Jr., and Carbon Silicon. It defends freedom of speech and doesn’t want to depend on any formatting cultural system.

How did you come to be involved with Marky Ramone and Blitzkrieg?

Laurent: When I was around 10 years old, I played hooky on Wednesday to go to the cinema, and I discovered the Ramones with the movie Rock’n’Roll High School. It was amazing, a true revelation! And a weapon to start my adolescence; where I’m still in! But now I can realize my fantasies… So we’ve contacted Marky’s management and we proposed to illustrate one song of his choice. They liked the concept; and that’s how it began…

What is the concept behind the video for “When We Were Angels?

Laurent: The song brought us in a kind of dark universe where each member of the band is searching, discovering something in his own nightmare.

What software are you using to create the video?

Laurent: We use the software 3d studio max. 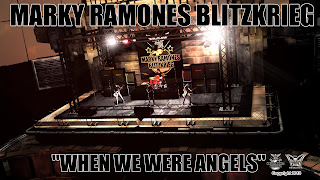 Did you do any pre-production concepting (character designs, storyboards) in 2D first?

Laurent: It was a real challenge to work graphically for Marky Ramone, because the Ramones have already been done in many different graphic styles. Marky was also immortalized in The Simpsons.The only thing that we hadn’t found was a semi-realistic representation and that’s what we proposed. We started from classic drawings that we transformed into 3D models. We proposed those models to the band and to Marky because we wanted that he could see what would be done [with his likeness].

How involved was Blitzkrieg in the video’s creation?

Laurent: They are very available even if they are on tour at present. We send them proposals and wait for their comments for edits.

When will we get to see the finished video?

Do you have any plans for a follow up?

Laurent: If you are talking about another adventure with Marky Ramones Blitzkrieg, we don’t know. For the moment we are concentrated on the video… 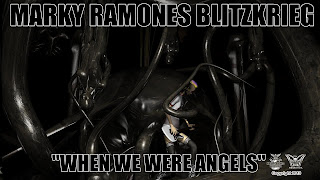 This may sound weird, but has anyone considered producing figures or maquettes based of your designs for the video to sell to the fans?

Laurent: No we haven’t thought about it! But well, it’s a good idea! We have so much drawings and models! How can we proceed?

Laurent: Marky Ramone is a legend; it’s a great honor to work with him and Blitzkrieg. I hope that the fans will appreciate the video, we think of them on each step of the production.

Head here to keep up to date on all of Callicore Productions projects: http://www.facebook.com/home.php?#!/callicore?ref=ts !
Posted by Professor Brian O'Blivion at 1:27 PM