You're invited to a Dark Party: A Conversation with Acey Slade 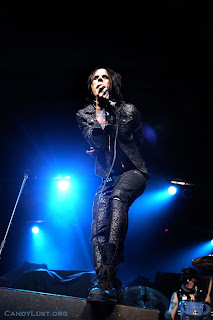 From his time with Dope and the Murderdolls, to his days fronting TrashLight Vision, to his newest band, The Dark Party, Acey Slade has brought true heart and passion to every project that he has been involved with. Recently I had the pleasure of asking Acey some questions about his amazing career.

After checking out your latest endeavor, The Dark Party (http://www.myspace.com/aceyslademusic), I was struck by how divergent it is from your past work. The music is gothic, mature, and at times strikingly beautiful. I love the fascinating fusion of electronica and dark rock and how that differs from the raw, pure, guitar driven rock sound of your past. What was the inspiration behind the formation of The Dark Party, and what influences the new sound?

Acey: Well for me, when you play 'raw, pure, guitar driven rock' for a long time, it starts to seem like a 'day job' if that makes sense. So, for me, when I am home I would throw on some electronic, pop, 90's alternative..just stuff that didn't have to be guitar driven to be good. This was an extension of that. I also want each Dark Party album to be unique from the previous one..so..that was the direction this time. The new album is already shaping up to be different from the 'Dark Party' album. 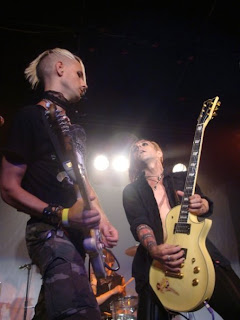 Do you have a particular favorite song from the new album, and if so, what makes it your favorite?

Acey: She Brings Down the Moon and Sugarcum. Maybe 'Sanctuary' because it was a pretty brave song to cover and we did a kick ass job on it!

What gear do you currently use, and conversely, what is your favorite guitar you have ever owned?

Acey: I can say in all honesty, I love my rig now. And they are all brands I never thought I would be touting. My Peavey Penta rig is kick ass and the ESP Phoenix is just slammin'! I mean I have done the classic vintage American made guitar though a high end California amp thing..but,this combination is just amazing. And me..ha,ha...

Taking a step back, I first became aware of your music when I caught you on tour in 2005 fronting TrashLight Vision. I had no idea what to expect from the band, but was amazed by the hard hitting, high energy rock you performed that was, to me, like the spiritual successor to Appetite for Destruction era Guns N' Roses. Can you tell us a little about the journey TrashLight Vision took from formation to the eventual demise of the band?

Acey: Well I don't regret the past nor do I wish to relive it. It was a great band that worked its ass off and did things that exceeded most of our expectations. But those that burn brightest, burn fastest. We just burned out really. My only regret with that band..the only thing that I look back on with some sadness, is knowing this, our 2nd album would have been amazing!

Acey: Oh wow..I forgot about that. I don't know why. I think I thought it might be predictable to put that track on there. I'm known for doing the exact opposite of whatever is logical, ha,ha...

Another thing about you that really took me by surprise was your accessibility to your fans. After you performed, you took the time to speak to all of the people that came to see you (and not just a "hello" either, you carried on long conversations, posed for pictures, signed merchandise, etc.). I'm sure in your career you have had the chance to interact with artists whom you admire. Who would you say is the most influential artist on your creative process, and have you had the chance to meet that person?

Acey: In the creative way..well..I don't know for sure. I'll say this much-Nikki Sixx is an awesome guy. But for where I'm at now, I'm trying to draw inspiration from different places. World events, street artists, there are a million things that inspire me to write a song now, that have nothing to do with songs written by other people. I'm really striving for originality with this project, even if it is at the cost of not being what's current. That's the problem with a lot of musicians. They are more concerned about being current then they are about being creative. 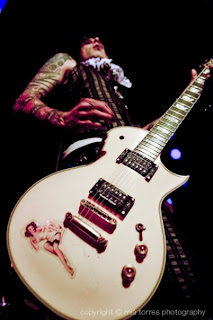 Another project from your past that I truly love is The Murderdolls, which blended horror movies and hard rock in a way that hadn't been done correctly since the halcyon days of Alice Cooper. It seems that since the time of The Murderdolls, the prevalence of horror influenced bands has increased exponentially. How do you view the current state of "dark rock" or "horror punk", and what new elements do you feel it must adopt in order to survive as a genre unto itself?

Acey: Well I can tell ya right now-Stop with the Danzig/Misfits shit, ha,ha..IT"S OLD AND TIRED! ha,ha..unless you are Danzig or the Misfits. Maybe all the Misfits 'wanna be' bands should do smash ups with Shakira, ha,ha...I dont' know. I mean...Nick Cave is one of THE darkest motherfuckers out there..check him out..I was always proud of how the 'dolls were a horror rock band that didn't sound like a b rate Misfits.

Acey: Fave? Well...that's tough. I like a lot of weird shit. I'm not as into the main stream stuff. I love a lot of asian horror movies. Oldboy is pretty sick, but not horror I guess. I just saw Taxedermia..that's more along my lines. Twisted ride that movie is! I like stuff that fucks with your head a little more. Hitchcock, Poe, even David Cronenberg.

Strong visuals can make a huge impact on initial public perception of a band to a degree where it at times can overshadow the music (ex. Everyone knows the Crimson ghost Misfits logo, but a portion of the individuals wearing the logo can not identify the music of the Misfits, and some are not even aware the logo represents a band at all). As both a musician and visual artist, how do you find a balance in your work between the visual and the sonic, and do you think that t-shirts and strong graphic design can be effectively utilized to draw in new listeners, and do you think there is a way to eliminate the disconnect between the two that exists for some?

Acey: I see it 2 ways. 1-as a fan, it pisses me off seeing people in Ramones, CBGBs, Misfits T-shirts who have no idea what or who it is. Drives me nuts and I see it in NYC all the time. Trust fund kids spending 300.00 on a 'vintage' Ramones T-shirt and can't name 1 song by them!
But...2-As a musician, I'm glad to see people get paid. In the case of the Ramones for example, they don't even have a gold album, ya know? Their legacy is bigger than their actual sales. So from that stand point..all the power to 'em. 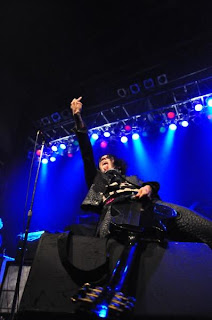 I notice you are featured in the upcoming book "Sex Tips From Rock Stars" . Any words of wisdom for our readers?

Acey: Be safe and buy the 'Golden Ticket'.

Email ThisBlogThis!Share to TwitterShare to FacebookShare to Pinterest
Labels: Acey Slade, by indrid13, Interview, Interview by indrid13, The Dark Party

That was an outstanding interview. You weren't just asking short questions. The questions had a lot of description to what you were asking Acey. And Acey himself had stupendous answers to them.

I'm glad you liked it! Thanks!!