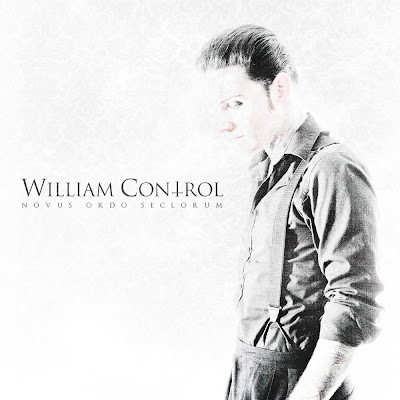 
William Francis has never been afraid to expose his listeners to new perspectives on universal subjects such as love (and its close relationship with pain), theological hypocrisy, and art’s role as a belief system (not unlike the 19th century English movement of Aestheticism, which counted Oscar Wilde amongst its members). On “Novus Ordo Seclorum”, the latest William Control release, Francis has taken these themes to exciting new places, once again holding a mirror to a vain and narcissistic society to reveal the decay that festers just below the surface.

The album begins with “New World Order”, a rough translation of the Latin phrase that comprises the EP’s title. This track is a call to arms for the listener to change their perspective on the world. Society isn’t working the way as intended; people are led astray (and in turn made to suffer) by leaders whose only beliefs are in currency and antiquated ideals. In this track, it is mentioned a poet should be called upon to reshape society, which brings to mind the philosophies of Aestheticism mentioned above. The tempo is kept fast for most of the piece, and William’s voice is rich and full against the keyboards, once again providing an excellent series of contrasts that I feel is the hallmark of his sound. The almost chanting backing vocals offer the perfect complement to the subject matter, as they underscore William’s words of a new faith based on creativity.

Next is “Disconnecting”. This piece is almost Shakespearean in its themes of a love betrayed. References to ancient Rome are given, perhaps as a nod to Pablius Virgil, the Roman poet who’s fourth Eclogue contains the phrase “Novus Ordo Seclorum”. Although keyboards are featured prominently, this particular song is less electronica influenced then the others appearing on the album. William presents the lyrics in a crooning fashion that truly conveys the heartbreak felt by the song’s subject.

“Love Is Worth Dying For” explores the relationship between pain and love, a continuing theme in William’s work (such as “Strangers” from Hate Culture). While the subject matter is dark, and may not be every listener’s cup of tea, the points William makes are valid (whether or not Francis means them metaphorically or not is open to interpretation), and like all good art, it challenges the audience.

“1963” (note this track is only available on the physical CD of “Novus Ordo Seclorum “) is a New Order cover that is right at home on this release as it contrasts a love gone horribly wrong juxtaposed with ultra-listenable (some may even say happy sounding)hooks. William always provides excellent versions of others material (for example his gorgeous rendition of “Can’t Help Falling in Love” from Noir), and this is no exception.

“Perfect Servant” deals with the darker side of pleasure, not unlike “Love is Worth Dying For”, but on this piece the style is reminiscent of 80’s era synthpop (a style that may be unfamiliar to some of today’s listeners). While bondage may not be understood by all, the love and pain antecedents are brought to the fore here, which links it thematically with many past pieces from the William Control catalog (such as My Lady Dominate from the noir album). As one who immensely enjoys 80’s electronica, I found this track a welcome and refreshing take on a classic style.

Finally comes “The Optimist Within Me”. This track seems to represent William’s farewell to the ways of old. His hatred of the decayed society manifests itself in his witnessing its demise, uncaring and unremorseful. And while unsure of what the new ways will bring, anything has to be better than what came before. William makes a bold choice to end the album with a dark and melancholy track, as most would have left the listener with an upbeat representation of what is to come. It is with this unexpected, unflinching honesty that William makes his mark. There is always hope, always joy and love, but are we willing to explore the road less travelled to arrive at a better place?

William Control’s “Novus Ordo Seclorum’ can be purchased here: http://williamcontrol.bigcartel.com/, and it is highly recommended that you do!
Posted by Professor Brian O'Blivion at 10:13 PM