A night to remember - until the day you die! 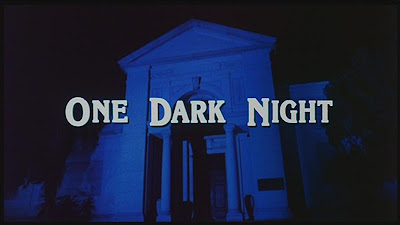 "I wanna get there before it closes, nerdle brain!" 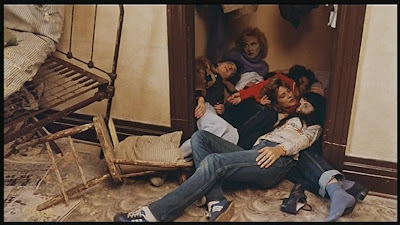 In a dingy apartment the police find the body of Russian psychic Karl Rhamarevich (AKA "Ramar") as well as the bodies of six young women and objects embedded in the walls. Elsewhere as an initiation into a high school clique called The Sisters, Julie (a young and cute Meg Tilly) must spend the night alone in a mausoleum. The same one were Ramar is being interred. Across town Olivia (Melissa Newman), Ramar's daughter who never really knew her father is having nightmares about him. Her husband Allan (Batman's Adam West, in too brief and restrained role.) doesn't understand the fuss over a father she didn't know that well. An old associate of her father's Samuel Dockstader (Donald Hotton) visits them and clues them in to the fact that Ramar kept his distance from his daughter because he was a "psychic vampire," who drained the energy of young women to power his physic abilities. Back at the mausoleum. The Sisters are running around in the shadows trying to scare Julie. Turns out it isn't really so much an initiation as it is payback by the bitchy leader of The Sisters, Carol. Because Julie is dating her ex-boyfriend. As all this plays out a very not dead Ramar stirs in his casket and he's hungry for that sweet psychic energy. 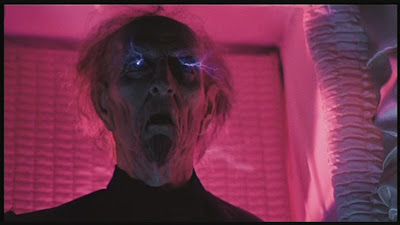 One Dark Night was released theatrically in 1983 but was actually filmed two earlier.
I first saw it back long ago (The 80's) on HBO and later rented it from Captain Video which is sadly gone now, back in the 90's. It plays better now as 80's horror nostalgia then anything else. Mainly for the fact that nothing horror wise really happens till the final 20 minutes when Ramar and all hell breaks loose as corpses break out of their caskets and the girls run for their lives. The pacing is too slow for this type of film. While it's nice to have character and story in a horror film there's a little too much in this one. 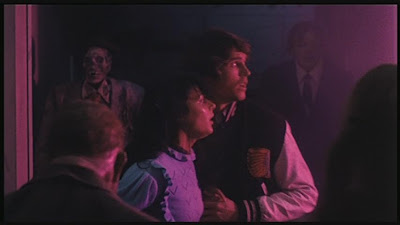 But it's not all bad. Acting wise everyone does a good job. Meg Tilly handles the lead role well and is likable. Also good is Elizabeth Daily as The Sister who doesn't go along with Carol's plan. And as I said earlier there's not enough of The West. There's no crazy Family Guy style Mayor West on display here. He's very low key in his few appearances. Directed by Tom McLoughlin (Jason Lives: Friday the 13th Part VI) with a deft hand. He creates a nice atmospheric film with a fun premise. Recommended for anybody who misses early 80's horror were the hair was big and fashions loud.

this was a fun film for sure, but man does it take forever to set up

I see a lot of influence from Phantasm in that clip. But that might just be me.

I'll have to actually watch this film at some point.