Tomie will not die! 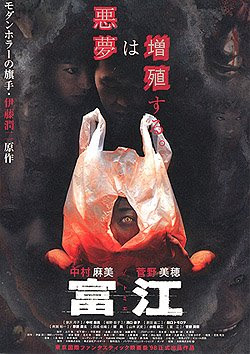 "Here is your dinner." 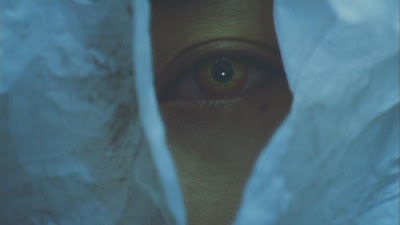 Tomie is just a head and she's growing. Living in a box in a dingy apartment and fed by a crazed, one-eyed young man. Tomie gradually grows a body. Upstairs, her former classmate and best friend Tsukiko who lost her memory of an incident that led to Tomie's death. Unaware that the immortal Tomie is living downstairs and has plans for her. 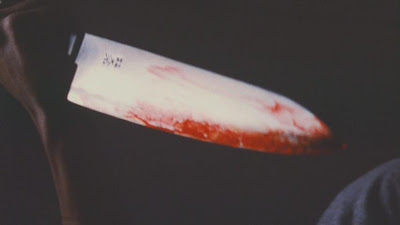 First time I saw Tomie I really had no idea what to make of it. A film about an evil head in a bag? Sure. The image of that eye looking thru a hole in a bag was such a strong, bizarre image. There's a strong sense of impending doom. And that score works it's way into your psyche. Actress Miho Kanno, who's face is hidden from the camera for most of the film's running time does a good job as the giggling, fickle Tomie. Tomie never one to get her hands dirty uses madness and her sexuality to make the men around her murder.
What really works is the stuff we don't see. Like Tomie's head in that bag and when she's in the box. Only hints are given. Allowing our mind to to the rest. 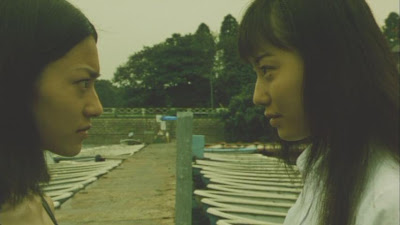 Much like Tomie's head this film has grown on me over the years. nothing like all The Ring clones out there. Tomie is her own monster. Not a long haired ghost but a living breathing women who's only love is for herself. Tomie's franchise like her will not die. There seems to be a new one every year or so. And that's fine by me.

Nice, this is the first I've read about the Tomie movies. The franchise is based on the fantastic comic series by manga artist Junji Ito, one of the greats of horror comics. The stories are just so relentless in the way they keep returning to Tomie, who grows increasingly cruel and grotesque with each iteration. Nobody can craft disturbing, surreal images like Ito, though the Tomie stories are some of his most (comparatively) visually realistic works.

I also really love the creepy Uzumaki, in which a small town is slowly devoured by an infestation of deforming spiral patterns, and the absurdist Gyo, in which monstrous sharks with robotic legs terrorize the Japanese mainland.

Thanks. I've only seen the first three films. I've got to get around to the others. I want to pick up the manga as well.
Haven't got around to seeing Uzumaki yet. Ii looks insane.