Lately there's a few things I just can not get enough of...

I just can't get of the Italian crime films, violent, gritty, sometimes way over the top and always filled with the rocking music. I've been going through them like popcorn. Fernando Di Leo's Mafia trilogy is perhaps the best of the bunch, but there's so many more out there I'm dying to see.

These Italian war movies, while not as well know a genre as it's 'Spaghetti Western' cousin or even the Poliziotteschi have grown on me. Filled with bad dubbing (always charming), over the top action and lots of stock footage in some cases. After watching the original Inglorious Bastards I'm hooked. It's funny, I remember renting G.I. Bro back in the 90's and having no idea that it was just Bastards re-cut to focus more on the Hammer's character. 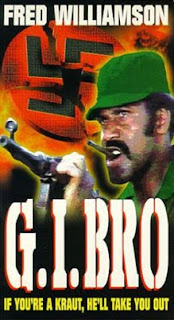 Part slasher movie, part mystery, with a dollop of soap opera. Evey episode a least one character dies a nasty death. Very entertaining with a healthy dose of the sexy. Only 13 episodes long, I've been blasting though the box set.

Who knew killin' Nazis could be this addictive...
Posted by Professor Brian O'Blivion at 10:55 PM

Italian Crime films are the best! Screw Goodfellas. Have you watched The Big Racket yet? Or how about Street Law? Those are both pretty great. Milano Calibre 9 is awesome too.

Haven't seen those yet, but their on the list...I love The Violent Professionals and I just watched one with Franco Nero called Redneck which was good.