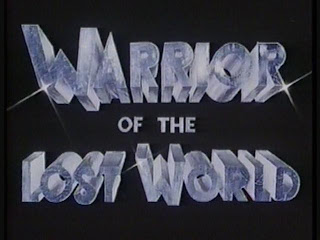 "Work is everyone's freedom. Work must be neat and efficient. Food and entertainment are provided. Silence is its own reward. Obey the laws and obligations. We are very well today, thank you." 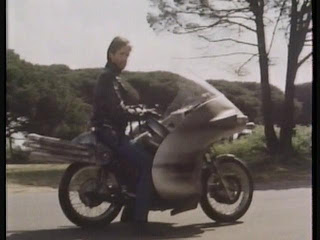 Pain, thy name is Warrior of the Lost World...

Right away there was trouble. The film opens with the longest, most convoluted background story scroll this side of a Star Wars prequel. Something about World War III going down (Hate when that happens). 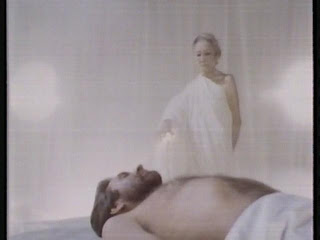 A cat named Prossor (Pleasence) and his OMEGA government rules what's left of civilization. Prossor looks so much like Pleasence's Blofeld that I'm surprised there was no law suit action involved. But there's hope. in the form of The New Way. A gang of mystics in togas and a bunch of soldiers, both of whom live inside a mountain. Out in the wastelands there's The Warrior (Ginty) and Einstein, his talking motorcycle! Some OMEGA goons try to pull The Warrior over for speeding! Really! He fights off the OMEGA lackeys but ends up crashing into a mountain. After The Warrior wakes up in the base of The New Way. Somehow he didn't die from the whole crashing into the side of a mountain thing, and The New Way mystics heal him. He meets Nastasia (Khambatta) there, her father a New Way scientist has been captured by OMEGA. After a little convincing from the mystics and Nastasia threatening to shoot his sack, The Warrior agrees to help. Also hanging in the mountain is Fred "The Hammer" Williamson! He's some sort of New Way officer, but he only appears once in awhile. 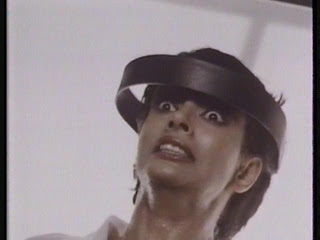 So The Warrior and Nastasia are off to infiltrate Omega city. To get there the pair have to make their way through a cave inhabited by spiders, snakes, and mutants. After a less then harrowing journey our heroes reach Omega city. McWayne, Nastasia's pop, is to be publicly executed. The two's rescue plan is as simple as it is brilliant. They storm the execution and shoot a bunch of the guards. The guards carry M3A1 machines guns that make laser noises and are worse shots then Stormtroopers and Cylons put together. So they easily rescue Daddy dearest. A extraction helicopter is sent to pick up the three. Nastasia is wounded and has to be left behind, during the escape. 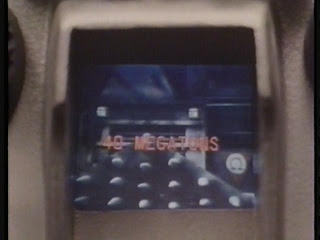 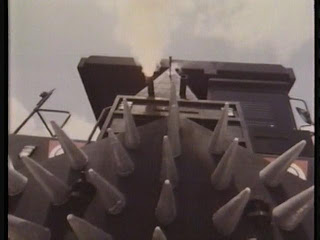 You can call him Mr. Megaweapon

Back at New Way central McWayne formulates a plan to overthrow Prossor. The plan involves getting the help of the Marginals. The Marginals are a hodgepodge of left over gang members from films like Escape From New York, The Warriors and Mad Max. The Warrior enters the Marginals battle royal. After he kicks the crap out of them, midgets and all, they agree to help. The Warrior with the help of his new Marginals buddies head off down the highway to storm Omega city. Standing in their way is an "evil" truck named Megaweapon. Einstein estimates that it would take a forty megaton bomb to destroy Megaweapon. Can our heroes stop Megaweapon and overthrow OMEGA? Will "The Hammer" show up and actually do anything? And what about Nastasia? Will she be rescued and hook up with the Warrior or shoot his balls off? 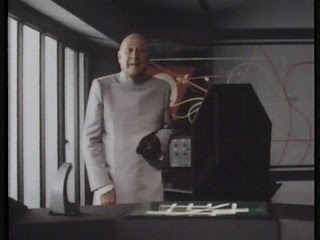 Well this was...something. This really, really hurt. From the bargain basement effects to well everything! Everything sucked! The Warrior played by the late Ginty is a bit of a whinny Whitney. He bitches and moans about anything and everything! And worse still he does it in a low mumble. That's right, our hero is a low talker. Then there's his sidekick, Einstein. A talking motorcycle who likes to not only use outdated slang but repeat everything he says. Such delightful phases as Bad Mothers, tubular and Beep Bop A Loola are used to a nauseating degree. Very few movies have ever made me consider jumping out a window to escape the pain like this one did. Sadly Robert Ginty, Persis Khambatta and Donald Pleasence are all gone now. Sad also that they had to leave this film behind to remember them by. Speaking of Pleasence, his Prossor, looks a whole lot like a certain Bond villain he played. Was there anything I liked in this mess? That it ended. Oh and Megaweapon, he should get his own film. Speaking of that, the film ends with a cliffhanger ending threating us with further adventures. Glad that didn't happen. If you like pain (Freak!) then this film will hurt like no other.
Posted by Professor Brian O'Blivion at 12:18 AM

Apparently this film was also influenced by Knight Rider, with the whole talking motorcycle thing.

This is one of those crazy Italian Mad Max rip offs...they were ultra lame, but always good for a laugh.