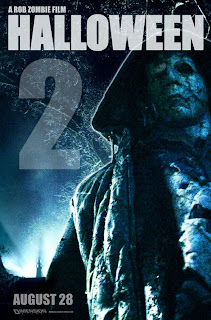 I'd been putting it off for a long time, dreading it. Having seen the trailers, read about all the changes and after reading many negative reviews, I figured It'd be nothing but pain. But after reading some really good analysis of the second film. Here and here. I decide to give them both a try in a one night back to back viewing blitz.

I never saw the original Halloween till after the second. I came across Halloween II on HBO way back in the 80's and loved it. Wasn't till a few years later that I saw John Carpenter's original. It may be blasphemy but I still like Halloween II better. Carpenter's is great and all but it's not my favorite film of his or of the Halloween franchise. I love the hospital and full on rambling Loomis of part two. The whole sister thing never bothered me because this was my first dip in the Halloween pond. I really dig the Mikeless third for it's own charms (Silver Shamrock!) and four is a pretty sweet return to Myersville. Five has actually gotten better over the years. Six, well it depends on the mood I'm in. H20 is fair (Too many cheap jump scares though.) and Resurrection...well mostly sucks ass. When I heard they were remaking the first thought was really? Is that needed?

As far as Mr. Zombie goes? I'm not a Rob Zombie hater. Far from it. I got hooked on his music back in the White Zombie days. His music and love of horror was the right combo for this Fango loving fiend. When he went solo, I was right there. I've seen him in concert a few times and bought more then my share of Rob Zombie stuff. I liked his first two cinematic outings, though I haven't watched them in years. But when I heard he was remaking Halloween and making all these crazy changes. A white trash origin? Making The Shape human? No thanks. So I stayed away.

Because I'm a completest with stuff I love. Be it TV or film series. I have to get the whole damn thing. So I bought both of Zombie's Halloween films when they came out. Never really sure if I'd watch them or just own them as part of the Halloween series.

After October I'm a bit burned out on horror for a few months. But like one some slasher movie killer it always comes creeping back to me. So as I said after some reading I actually got a bit excited to see Zombie's second Halloween film. And of course that meant watching the first one. I was prepared to be mad, to curse Rob Zombie's name and to be generally disappointed.

But I wasn't mad after seeing them, nor disappointed. There was no cursing. No, while there was enough, especially in the first film I could have done with out. The consent swearing, I'm no prude but c'mon. I've never meet anyone that cursed that much. Could have done without the redneck rapists as well was the whole white trash Myers clan. Humanizing Myers into a serial killer takes a bit away from his menace and mystique. I always liked the fact that he just snapped, no reason, no explanation. Of course the later films came up with some bullshit reasons themselves. In H2 as it's sometimes called I found the white horse dream thing got a tad overused.

But a bunch of credit has to go to Malcolm McDowell, Scout Taylor-Compton, Tyler Mane, Danielle Harris and Brad Dourif for really making the most out of their roles in both films. McDowell's Loomis is totally different then Loomis of old. His scenes with young Micheal Myers in the first film were pretty damn good. The surrogate father angle was something new that I'm surprised was never used before in the series. Danielle Harris really made me care for the Annie character, especially in the 2nd film. Speaking of the 2nd film, Dourif made the sheriff an incredibly human character. I liked Scout Taylor-Compton's Laurie and her arc in both films. Making her a totally messed up and having her scared in H2 was an interesting story idea that isn't used enough in horror sequels.

While far from perfect I found that I sort of like the first Zombie Halloween, though it's got more then a few warts. And the second one I found myself digging on. I've had my faith somewhat renewed in Zombie as a filmmaker and wouldn't mind seeing him take a third swing at old Micheal Myers.


Posted by Professor Brian O'Blivion at 1:56 AM

Wish I could agree. If Zombie wanted to make a movie like this, he should have made it on his own.

What he made was the opposite of what made "Halloween" great. I watched it once, in theaters and hated it. Haven't watched it again and really have no care to.

Never went to see his part II. Don't have the DVD, either. And for me, a completist as well, this marks a changing point. His stuff turned me off so bad, I don't even care to give any $$ for it. Enough said, in my book.

Cant comment on part II (yet) but I did enjoy the first one. I liked the whole prequel/remake thing they did with it.

Also, to me Myers was more viscious then on any Halloween film which I loved. Also noticed that Zombie left some scenes completely intact. He shot them exactly the same way Carpenter did. Shot for shot. But only in certain instances.