10 Questions: An Interview with JV Bastard 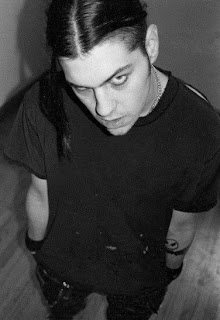 I’ve recently found out that the always awesome JV Bastard has formed a new band that is his most personal project to date! Read on for your introduction to this killer new band, The Darrow Chemical Company!!

1. What lead to the creation of your new project “Darrow Chemical Company”?

The music I began to write started where "Over Your Dead Body" left off. I had continued to write in that style all through "Gotham Road", and "Michale Graves", and songs accumulated, I tried to repair the ties of "Mister Monster", and was even in the band again once or twice, when I found the situation to be unreparable and was exhausted. I saw that my vision was very different than the vision J-sin had for the band, so I decided to move forward alone, with no one but myself as the potential vocalist. I'm no singer, but I can sing, I couldn’t imagine anyone else getting the point of my lyrics across besides my self, so I've been moving forward from there, I'm trying, and it’s going pretty well. I just want to write punk rock songs that people can relate to and find a piece of them selves in.


2. Your sound is reminiscent (at least to me) of Carnivore meets Earth A.D. era Misfits, but with a unique quality all its own. What inspires this project sonically?

Social D, Pennywise, Nirvana, Face to Face, Samhain, Moonspell, Type O, The Ramones, The Groovie Ghoulies......Its cool that you hear Earth A.D. in there, cause I still want to write "the Earth A.D. lost tack" for the Darrow record, that’s my favorite Misfits record hands down, I really want to throw a thrashy one, that invokes the spirit of Earth A.D., into the mix

3. You are currently working with some famous faces from the past. Can you tell our readers about the line-up and how it came to be?

This band started with Germs (Ex Mister Monster) and I jamming in my basement. We were living together, and would take any moment we had to get some jam time in when no one was home. At first it was just him on guitar, and me on vocals and drums, just to get the writing done. Then Loki came into the mix playing drums. I got divorced, and started writing a lot of new material. Then it became interesting. Loki was never a drummer, Germs never a guitarist (by himself) and myself never a singer, then we kinda made the decision to take it to the next level when Matt Johnson came back into the fold. He is an old friend; he played drums on the Michale Graves "Punk Rock is Dead” tours, in 2005. He is a metal head gone schooled jazz drummer, now he's a drum teacher, so the kid plays all day, its inspiring how much he knows his instrument, he really eats sleeps and breaths playing drums. A big issue as well was finding a guitar player, considering Germs, Loki, and I all are guitar players. I don’t think I've ever auditioned a guitar player before. It was unimaginable who to bring in. Switching Loki for Matt Johnson became the obvious answer, Loki being the most accomplished guitar player I've worked with, was a situation I couldn’t let pass by, and put me in a situation to have an over qualified Punk Rock band, considering these songs are straight on the dots punk songs, I'm very fortunate to have such accomplished musicians give me their time on this project. I appreciate them giving me, and my music, that respect. 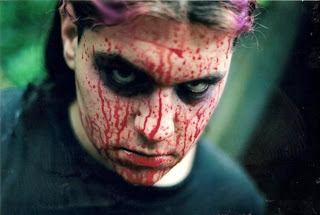 4. Are there any plans for CD releases in the near future?

Ya know I don’t know if I'm gonna bother with a cd, unless it takes off. I kinda wanna do it iTunes or PayPal style, and do a limited run of records (LPS), I have a label I'd like to work with that seems interested in the project, if all goes well that’s my first move. I wanna do a 6 song ep with a bonus track on the record. I could do that tomorrow; I’m debating on holding out and doing a full record.

5. Any plans for touring?

6. I really dig the Return of the Living Dead reference with the band's title. Do any films in particular inspire your songwriting?

Not really. To be honest, I watched "The Howling" a lot when I was working on the tune "Full Moon Rising" (witch is a total CCR homage) but I don’t think it really inspired the song, I wanted it too. I was always fond of the story of the Wolfman, I always identified with it very personally, and always wanted to write a song, based on the Jeckle and Hyde style of living two lives, I really wanted to identify with that as a real lifestyle and trying to live in real life as a Werewolf, and up holding a relationship, job etc. but once a month .... oh fuck!

7. You currently have many creative outlets (Darrow, Doomsday Prophecy, your work with Michale Graves), that are all unique. Do you find that each project represents different elements of your personality?

Yes absolutely, Darrow is 100% me heart and soul, Michale’s band is in my opinion my duty and calling, and Doomsday is my roots, I'm a metal head kid. it gives me an opportunity to gig and stay stage fresh, while playing more aggressive rhythmical music. Kind of Similar to playing in Gotham Road 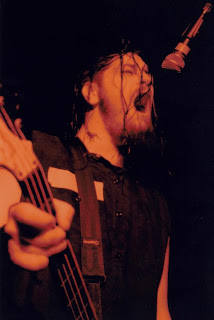 I write at night most often. Drunk, Stoned, and on some pills, is usually the antidote for a song, at least lately, I find that my best compositions are done in one sitting. It may sound silly or as if I’m trying to come off cool, getting all fucked up to write music, but, I seem to bare my soul more when I'm fucked up like that, and I don’t just get fucked up like that for no reason, so it usually winds up as a negative turned to a positive. I wrote a song on my phone on a bench in NYC a week or so ago. It’s gotten to where I don’t need an instrument to compose, and that’s pretty cool. Most of my better songs have come about in my head, the Mister Monster song "Guaranteed to Bleed" was written before I ever picked up an instrument. When the time is right, I just hear them.

9. I love the views you have been giving your fans of Darrow's rehearsals. Any chance of this continuing?

Yes I think its cool to keep everyone involved in the growth of the project, it gives everyone a chance to be a part of it, we have like 49 friends on MySpace, and I think that’s so cool, just the kids who really know the scene and pay attention are catching on, and they get to get that experience of seeing it naked, and from the beginning. I know there is interest in the project and am confident, but I've put nothing into promoting this so those 40 something people are my world right now, I'll cater to them, I'm pretty sure everyone will dig the end result. I don’t care who listens, this project is very much for me, and overcoming a lot of my own demons, if it never saw the light of day, just the completion of the project would be a great success to me.

10. Any final words for our readers?

Thank you for your continuous support, some of you have been around for a decade now! We’re getting old!

I'm still an 18 year old trapped in a 27 year old body, my interest is to write fun songs that aren’t 1000% horror driven just to fit some mold, I aim to provoke thought, hit home with people, and write songs that we can all relate to. I think everyone who knows me knows what I'm all about, and while there is unavoidable horror in all of my music, I'd like to demonstrate that this now lame scene is not all about your hair cut, make up and bone gloves. I hope to set that bar for the bands who we have influenced as of yet. I hope to inspire individuality in this scene rather than more carbon copies......... Influences should be a source of inspiration rather than a mold. 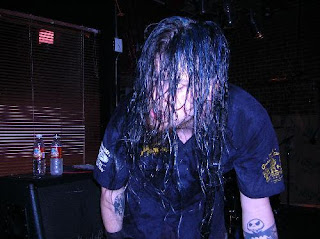 Everyone should head to www.myspace.com/darrowchemicalcompany and check out the killer rehearsal videos JV has posted. While your there, don’t forget to show your support and friend them!!
Posted by Professor Brian O'Blivion at 10:16 PM

Cool! He mentions Social D. Everyone should.