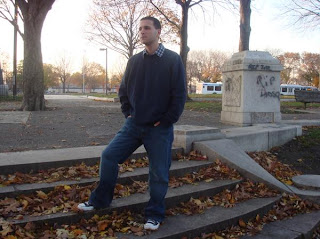 Here's horror novelist Brandon Ford with his top 10 horror films for Halloween. Don't forget to pick up a copy of his latest book, Creeping Shadows.

Growing up a horror buff and being a genre author, Halloween is obviously my favorite holiday and one I spend all year looking forward to. Costume parties, stuffing apples with razor blades, and howling at the moon are fine ways to spend the evening, but I prefer to hand out treats and kick back with some classic horror flicks. I’ve agreed to compile a list of 10 favorites and the only way I could make this easier on myself was to include two conditions: the first being not to place them in order from great to greatest because it would be next to impossible for me to settle on what should take the #1 spot. The second to exclude mainstream/well-known titles like Halloween, Elm Street, Friday the 13th, Chainsaw Massacre, etc. I think we can all agree that these are classics and genre staples, but everyone and their grandmother is aware of them. Even those who don’t care much for horror know who Freddy Krueger is, for God’s sake. So, this list is dedicated to 10 of my favorite lesser-known/under-appreciated horror gems. Get the popcorn ready and watch at your own risk. 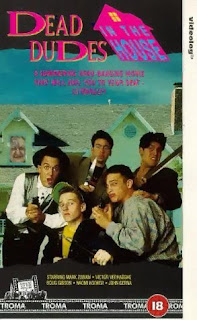 10. DEAD DUDES IN THE HOUSE (1991) – Released under multiple titles including The House on Tombstone Hill and The Road, this strange and gory classic concerns a group of college-age friends who gather to fix up a dilapidated mansion way out in the boonies. What they don’t know is that its original owner, a creepy/zombie-esque grandma, is still in the house. Locking them inside, she begins to pick them off in grisly fashion. Hope you’ve got your vomit bags handy. 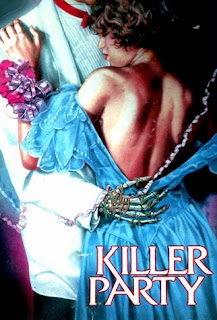 9. KILLER PARTY (1986) – It’s April Fool’s Day and the Sigma Alpha Pi sorority house is planning a huge soirée. Unfortunately for them, the place they’ve chosen to hold the shindig, an abandoned house once a popular frat, is the last place for drunken college antics. Some years back, a prank gone awry claimed the life of a very unlucky fraternity pledge. In true horror fashion, the sorority girls hold a séance on the grounds and in the process they inadvertently conjure a very pissed off demon. “April Fool, assholes!” 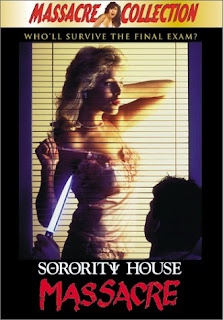 8. SORORITY HOUSE MASSACRE (1986) – I’ll be the first to admit I have a twisted affection for sorority carnage and this one is definitely one of the best. A deranged killer, held for brutally murdering his family, breaks out of an asylum and starts off on a search for the one member he wasn’t able to nail—his youngest sister, who is spending the weekend with some friends at a sorority house. Follows in the footsteps of Halloween and several other slashers that have come before it, but still holds enough charm to make it a very memorable choice. 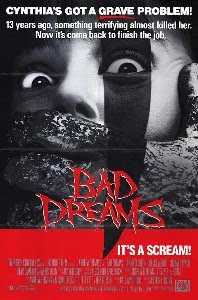 7. BAD DREAMS (1988) – The sole survivor of a suicide cult (led by a delusional whacko not unlike Charles Manson) wakes up after spending more than a decade in a coma. She now spends her days in a psych ward, struggling to get her life back on track and to adjust to a new decade. Almost immediately, she begins seeing visions of her deceased cult leader, a haunting figure horribly burned, and patients in the facility start turning up dead. Dark, brutal, and a pretty unique premise that includes strong performances by leads Jennifer Rubin and Bruce (“Hi, I was in Re-Animator!”) Abbott. 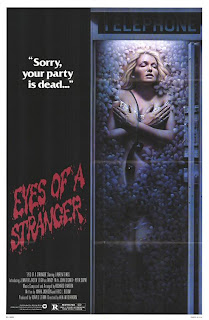 6. EYES OF A STRANGER (1981) – A serial rapist is stalking the streets of Los Angeles, leaving behind a trail of butchered young women. A TV news anchor is convinced her creepy neighbor (who just so happens to discard stained clothing in public garbage cans on top of keeping odd hours) is responsible. Desperate to protect her younger sister, who is blind and deaf, she’ll stop at nothing to bring him to justice. Lauren Tewes really holds her own in this one, as does Jennifer Jason Leigh (in one of her very first features).

5. DEE SNIDER’S STRANGELAND (1998) – A psychotic killer is stalking the Internet, torturing and slaying his victims in a disturbing and ritualistic fashion. Captain Howdy, a buff, tattooed, and pierced madman, uses his extraordinary intellect to outwit police detectives while holding multiple captives in a chamber of horrors. Dee Snider (of ‘80s hair band Twisted Sister) wrote, produced, and starred in this modern-day cautionary tale and his efforts were well appreciated by yours truly. Unfortunately, it’s one of the most underrated and overlooked horror films of its decade. Go figure. 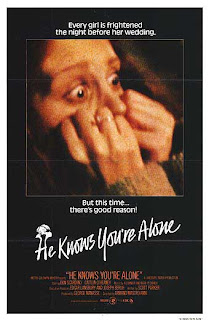 4. HE KNOWS YOU’RE ALONE (1980) – Amy Jensen’s wedding day is just around the corner, but instead of feeling the same joy and excitement of any young bride, she is beside herself with panic and terror, certain she is being pursued by a very menacing stranger. This stranger is actually a deranged murderer on the hunt for young brides-to-be and Amy is his next intended victim. Contains a pretty intense chase scene, a unique fish tank decorative, and Tom Hanks in his very first film role. 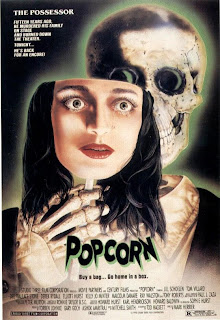 3. POPCORN (1991) – To raise funds for their dwindling film class, a group of college coeds decide to put on an all-night horror movie marathon at a local theater. Featuring fictitious camp films originally released with William Castle-style gimmicks, the audience is assaulted with a giant flying mosquito, a very foul-smelling gas, and a madman who is knocking off each member of the class. But why? This movie has to be one of the most fun of its genre, going out of its way to make the home viewer feel like they’re in the audience with the rest of the screaming theater patrons. Has some pretty fun kills and features one of the best scream queens of her time, Jill Schoelen (come on back to the genre already!). 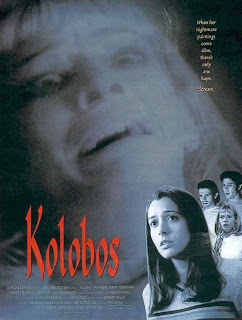 2. KOLOBOS (1998) – Five young strangers meet at a cabin in the mountains to participate in a Real World-style documentary. They agree to have their lives taped, spending 24 hours a day on camera. On their first night in the house, certain members of the cast are viciously slaughtered by a stranger with a hideously scarred face. Using a straight-edge razor, he slices his way from room to room until coming face to face with Kyra (strongly played by Amy Weber), an ex-psych patient with some very dark secrets. Featuring some pretty brutal kills, homage to various Italian horror classics, and a cameo by Linnea Quigley, you can’t go wrong with this one. But please avoid My Little Eye, a far less superior copycat it’s always compared to. 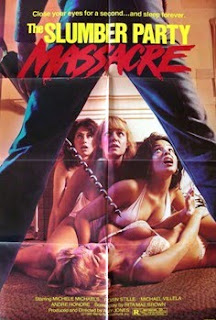 1. THE SLUMBER PARTY MASSACRE (1982) – To celebrate her parents’ departure, Trish decides to invite some friends over for a slumber party. Throw in some beer, pot, and a couple of uninvited boys and you’ve got yourself a good time. That is until a maniac wielding a portable electric drill decides to crash the party and the guests must fight to make it through the night. With its simple premise, witty dialogue, and copious amounts of nudity, there’s something here for just about everyone. Hey, they don’t call it the ultimate driller killer thriller for nothing.
Posted by Professor Brian O'Blivion at 8:59 PM

What? No Rob Zombie stuff?

Hi. Interesting list of horror movies. I've never heard about some of them. I've to agree that Halloween without good horror movie is not Halloween. However, my favorite one is, I don't know why, Nosferatu. Probably because I'm little bit fan to vampire stories. But I can say that some of these movies look worth to see. That's why I add them to my list.

Thanks Ella. Nosferatu is a great movie. One I've got to watch again sometime.