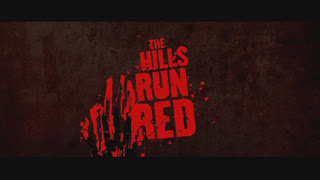 jad⋅ed  [jey-did]
–adjective
1.dulled or satiated by overindulgence: a jaded appetite.
2.worn out or wearied, as by overwork or overuse.
3.dissipated: a jaded reprobate. 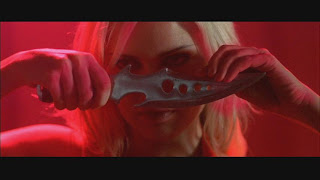 Horror film nerd Tyler (Hilgenbrink) is obsessed with a lost eighties slasher movie called The Hills Run Red. His quest is to find the complete print of film that only was shown a handful of times, before it was banned for it's brutal violence. He convinces his hot girlfriend, his best friend and the daughter of the director to follow him deep into the woods were the movie was shot. He hopes they'll find some clues at the nearby house were the crew stayed whilst filming. What they don't know and are about to find out is there's a new horror movie being filmed, with them as the stars/victims. 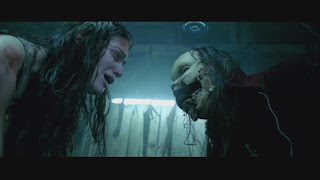 First things first. See that definition up there? I think that may apply to me. The critics blurbs on the box proclaim that the movie is "dark" and "brutal." I guess it is. Personally the killings in this movie weren't anything I hadn't seen in other horror films of this type. I had the same reaction after seeing the first Hostel. It really wasn't anything I had not seen in hundred other horror films. Hell, maybe I've seen to many Italian horror films. Watch Lucio Fulci's New York Ripper. That sucker is brutal. Watch Cannibal Ferox's penis cutting scene, it'll make you winch and laugh at the same time. Maybe I'm just tired of being told a lot of hype about a movie that just doesn't live up to it. Hatchet I'm looking at you. Don't get me wrong The Hills Run Red is a fine horror movie. Well made and well acted by obvious fans of horror. It's got an interesting looking killer and some good effects. But it's not anything new or different. There was a minor quibble I had with the "hero" of the film. Okay he's a horror film nerd with a gorgeous girlfriend and he'd rather stay up all night obsessing over a 80's horror film then go to bed with her after she practically begs him, WTF! Later it leads to a subplot were I guess you're supposed to feel sorry for him. I didn't. If that was my girlfriend, I'd gladly stay home with her instead of traipsing about looking for some lost film. 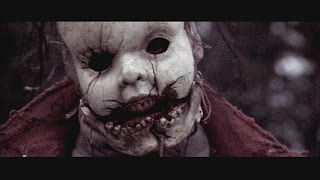 So in the end, see The Hills Run Red. It's a fun, worthwhile horror film. Just don't expect it to reinvent the wheel or anything.