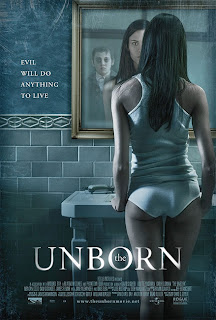 "Fuck off you little shit." 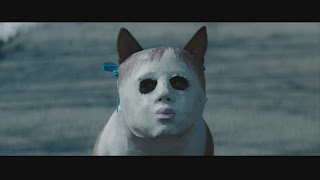 Casey (Cloverfield’s Odette Yustman) Is a collage student who's been having some weird dreams as of late. Soon her dreams start crossing over into the real world in the form of a strange pale faced boy who haunts her every move. She's also told in her visions that "Jumby wants to be born." Casey pieces together that what is haunting her is the spirit of a dead person that hasn't crossed over and become a demon. This demon wants to be reborn in her. She turns to a rabbi (Gary Oldman) in hopes of exorcising the demon. 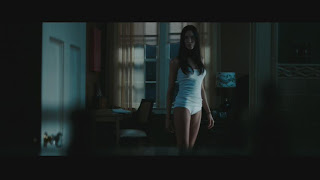 A big fat meh...I didn't really feel anything about this one good or bad. But I knew I was in trouble when the Platinum Dunes logo came on screen. I liked the idea of using Jewish mysticism instead of the stranded idea of Catholic demons that most films use. But other then that this movie was like 99% of the Hollywood horror crap that's been coming out. I really can't believe that David Goyer of Batman Begins and The Dark Knight wrote and directed this thing. It's too bad that Gary Oldman and James Remar aren't really given much to do. Especially Remar who shows up in two short scenes and that's it. 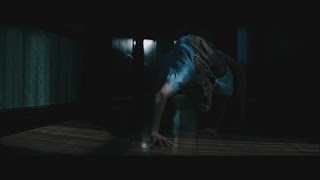 It's telling when the best thing about the movie was Odette Yustman's nice backside and the fact that she was in her underwear quite a bit. Hell look at the darn movie poster, obliviously the makers knew this as well. But if it wasn't for all her running around half dressed I might have dosed off.

Couldnt do it, I passed out at the 1:05:00 mark, they should have called it "Whoever She is Half Naked, The Movie"

LOL, that's about when I stared feeling sleepy too.