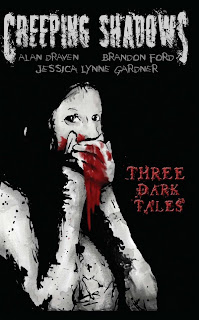 Monsters come in many shapes and sizes-from the creature in the shadows to the darkness of the human mind. Join three cutting edge authors as they weave fables of mayhem and murder.

Alan Draven's Vengeance Is Mine
It is the year 1888 and the district of Whitechapel, London is terrorized by Jack the Ripper. Prostitutes dread the coming of night as the Ripper prowls the streets for fresh prey. But one of his victims comes back from beyond death to haunt him and show him what it is to live in fear.

Brandon Ford's Merciless
Kidnapped by a madman, two teenage girls form an instant bond in the back of a speeding SUV. Bound and gagged, they face a night of unspeakable horrors. Inspired by a true story, Merciless is a tale of murder, madness, and survival.

Jessica Lynne Gardner's Sugar Skull
Shortly after her father's funeral, strange things begin to happen to Annabel Perez. A detective investigates as poisoned corpses pile up all with the same symptoms of Annabel's father. Together, Anna, her mother and the detective must solve the puzzle to the strange dreams of skeletons, Aztec rituals, and family secrets before they are next. A sinister-looking Mexican sugar skull found in her father's old cigar box might just be the answer ... or the means to her death.


EXCERPT #1
ALAN DRAVEN’S VENGEANCE IS MINE

The three students in the first row let out a simultaneous scream at the sight of what lay on the table: the man’s penis had been fed to him and now stuck out of his mouth, its testicles resting on his chin.
At the back of the class, Fowler did his best not to burst out laughing. His chuckling was loud enough to get the attention of the professor.
“You find this amusing, Mr. Fowler?” The professor took one more glance at the body before covering it up. Then his fiery eyes directed themselves on Fowler—if they had been guns, Fowler would be long dead.
“Another one of your pranks, I presume?”
“What? Me? Never!” Fowler had to pinch himself behind his back to suppress a smile. “I might be a prankster, sir, but I would never sink to such depths.”
“We’ll have to see about that. Class dismissed until we get this whole affair straightened out. And you, Mr. Fowler are walking on a very thin line. I will be seeing you in the Head Master’s quarters at once.” On that note, the professor exited the room at a brisk pace.
“What’s the big idea, Fowler? Why do you try to ruin it for everybody? You’re nothing but a bloody idiot.” It was Hannigan who was smiling now.
Fowler stepped up so close to Hannigan’s face that he could smell his rank morning breath. “I’m only trying to ruin it for you, you fucking wanker.” Fowler walked out on all of them, not looking back.

“Stand up,” he said, dragging her out of her seat.
But she couldn’t stand. She couldn’t walk. The more he tried to hold her up, the more she fell to her knees, begging for mercy and for freedom under the duct tape. The more she shook, the more she cried.
And then he struck her with the handle of the gun—struck her on the back of the head the same way he struck Charlie only moments before. It hurt more than she thought it would and the clouds of dizziness sent everything into a swirling blur.
“I said stand the fuck up,” he said, hoisting her back up again. “Now walk, you stupid cunt. Use your fucking legs, I said.”
He guided her forth, his hands on her shoulders as he shoved her along. She began to wonder why he hadn’t just shot her where she sat. He probably planned on taking her deep into the woods and raping her beforehand. Of course he was going to rape her. She was a fool to believe he’d take her life before he took her pride and security. But the woods were in the opposite direction. Where they were headed was towards what looked like an SUV. Must’ve been his car. His getaway car. She shivered again.
Oh God, he’s gonna kidnap me.
He shoved her around to the back. Squinting through the tears, she saw a pair of legs lying there still and motionless. He’s got someone else already. Oh, my God, he’s already killed this one. She’s dead! Oh, Jesus Christ, I’m gonna be next.
With both hands, he shoved her forth and she collapsed inside, landing on her face. Lifting both of her legs, he slid her inside, treating her like nothing more than a pile of luggage. He then taped her ankles together and slammed the door shut. Marching towards the front, he climbed into the driver’s seat and started the engine. As they peeled away, Kyra turned to her side and saw the blinking eyes of the girl lying beside her. She could feel the soft breaths tickle her ear. In that moment, she knew she wasn’t in this alone.

Coaxoch watched the child as she pressed the sweet, powdery mixture into the clay mould. She was kneeling, her tiny brown face golden with sunbeams. Carefully the girl filled
the rounded hollow shapes paying attention to the corners just as she had been taught. The tiny hands worked hard and she knew she would have grown into a strong woman, even stronger than her mother. A tear slid down her cheek but she was not sad. The sweet smoke brought water to her eyes and scratched her throat.
She turned. It was coming from the temple. Poor child, she knew nothing about life how could she face what awaited her? The empty faith that everyone else believed in, that she had once believed in, held nothing for her now but bitterness. She was powerless to stop the sickening reality of the innocent blood trailing down the stone walls, knowing that it served no purpose except to further spark the bloodlust of the people.
Nenetl beamed up at her, pride swelling within her as she held up her handiwork. Placing the mould back down, she shuffled over, her tiny brow lowering as she noticed the trails of wetness down the woman’s cheek. “What’s wrong, mama?”
“Nothing little one. Why don’t you make me three more while these dry?”
She cheered and ran to rinse the empty moulds and ready them for the next batch. Children were easily fooled but she would have to do better if she were to convince the others. She collapsed to her knees, her body losing the resolve she so desperately needed. Why did it have to be her? But she knew why—she’d heard it from his lips. She gazed at her shaking hands as if searching for the power within them. The lies of the priest would not go unpunished. She would save her people if she found the strength. While the others gave gifts of nourishment and blood to their gods, she had sacrifices of her own to make. But as she watched her only daughter smile, she knew that the price was not too high.


Alan Draven has written over 400 poems, hundreds of film and book reviews, three novellas, and a dozen short stories. His stories have been published as part of Amazon Shorts, in Darkened Horizons, NexGen Pulp magazine, SNM Horror magazine, the Bonded By Blood anthology, 9 of Swords e-zine, and in audio format on Dreadtime Stories. His first novel, Bitternest, was published in 2007. In 2008, he edited the gothic anthology Sinister Landscapes featuring the best of today's independent horror writers. Visit him 24 hours a day at www.alandraven.com and on MySpace at www.myspace.com/alandraven

Brandon Ford is the author of the horror/suspense novels Crystal Bay, Splattered Beauty, and the soon to be released Pay Phone. He has also contributed to the anthologies Abaculus 2007, Sinister Landscapes, and Raw: Brutality as Art. He can be contacted via MySpace at www.myspace.com/WriterBrandonFord and on Twitter at www.twitter.com/BrandonFord. He currently resides in Philadelphia.

Inspired by the dark and fantastic, Jessica Lynne Gardner has pursued the art of writing as a Journalist, author, business writer and poet focusing on horror and dark fantasy. She has been published in over a dozen publications including Darkened Horizons, Twisted Tongue, Sinister Landscapes, Phobia Magazine and Raw: Brutality as an Art by Snuff Books. Recently her story, "Inextinguishable", won first place in Shroud Magazine's Flash Fiction contest in issue 4. She is a member of The Southern Horror Writer's Association (SHWA) and the International Order of Horror Professionals. You can learn more about her work at www.JessicaLynneGardner.webs.com
Praise for Alan Draven’s Bitternest

“Bitternest is a scarily timely tale that beautifully weaves its storylines together in a fast-paced, expertly written manner through the use of short chapters that keep the reader glued to the action and turning the pages as quickly as possible.”—Dread Central

“Bitternest is a scarily timely tale that beautifully weaves its storylines together in a fast-paced, expertly written manner through the use of short chapters that keep the reader glued to the action and turning the pages as quickly as possible.”—Dread Central
Praise for Brandon Ford’s Crystal Bay

“[Brandon Ford] has created a well crafted story that hails back to the old horror/thrillers of the late seventies. […] I can’t wait to see what he does next.”—Garry Charles, author of Hammerhead
“Brandon Ford is the new Prince of Horror, soon to be King.”—Ryan Nicholson, writer/director of Gutterballs

“Brandon Ford paints a vivid picture… This book is superb. I'm proud to own a copy.”—Jim Dodge, Jr., Mass Movement

“Crystal Bay is a page-turner that reels you in and keeps you reading to the end.”—Front Street Reviews

“Solid characterization and a plot that moves, flows, and keeps you reading.  I love the way Brandon Ford writes…”—Nicholas Grabowsky, author of The Everborn

“Fans of B-movies, scream queens, and twisted carnage will not be disappointed!”—Tim Ritter, writer/director of Killing Spree

“Ford succeeds in encapsulating B-movieness. Splattered Beauty is highly visual and slightly addictive…”—Blood of the Muse

“Absolutely delicious! […] This affectionately lurid homage to scream queens drags the reader along on one hell of a bumpy ride.”—Robert Dunbar, author of The Pines

“Splattered Beauty resurrects the Scream Queen genre with a vengeance and the bloody mayhem that ensues leaves the reader begging for mercy.”—Ryan Nicholson, writer/director of Gutterballs
Posted by Professor Brian O'Blivion at 10:10 PM

Thanks very much for posting the press kit info! We really appreciate your support. :-)