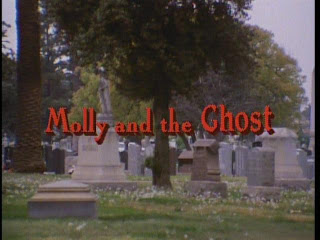 "Wait till she gets a load of me." 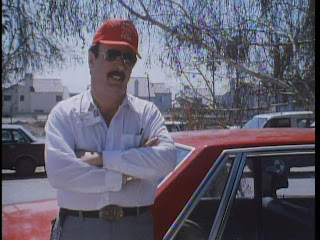 Susan (Henderson) shows up at her older sister Molly's (Darling) place to crash for awhile. While there Susan gets the hots for sis's husband Jeff (Moriarty). Things don't go well when Molly catches Susan putting the moves on hubby. Susan ends up getting kicked out and very pissed at Molly. She decides to hire a hitman to take out Molly. The first hitman doesn't work out. He's a bumbling goof who's never killed anyone. The second hitman, a real killer, ends up with the wrong picture and kills Susan instead. Susan on her way to the afterlife makes a deal with a spirit to stick around and haunt her sister. After some ghostly shenanigans Molly and Jeff hire a "Ghostbuster." Susan makes quick work of him. Susan decides to possess Molly's body so she can live again. Can Jeff oust Susan from his wife's body before the movie ends? 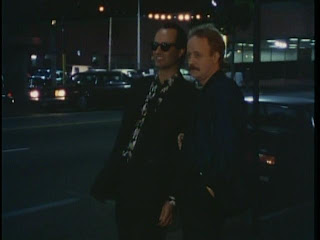 What a ridiculous movie. This is the sort of trashy cheese that USA Up All Night would play. With that in mind I enjoyed this movie on a purely sleazy brainless fun level. There's so much crazy shit going on here. Molly and Jeff are really never amazed or horrified by both the death of Susan and her reappearance as a ghost. Or the fact that Susan is supposed to be seventeen, but is clearly more like twenty-five. At one point Susan is walking around Hollywood after Molly kicks her out. Susan is trying to decide what to do with her life and who should show up? Maybe the worst Jack Nicholson impresonanter ever. Jack and his pal follow Susan around for a bit, torturing Susan and the audience with their really "great" shtick. How about the scene were Susan takes revenge on her killer. He shots her and the shot clearly goes through her ghostly form. But that doesn't stop him from trying to shot her over and over. Then there's the overacting "Ghostbuster" and his attempts at proving Susan's ghost isn't real. 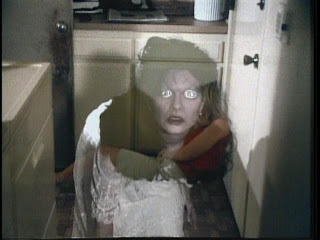 Directed Donald M. Jones (who also gave us drive-in fare like Schoolgirls in Chains and The Forest). There's a bit of the T&A. Sadly not as much as you would expect. There's also "special" effects. The best of which was ghostly Susan with what I guess were snakes coming out of her face. The effect is so badly animated it was a little hard to tell. The synthesizer score by Richard Hieronymus is raunchy beyond belief. If your looking for something a little sleazy, a little cheesy and all together ridiculous then Molly and the Ghost might just fit the bill.
Posted by Professor Brian O'Blivion at 9:50 PM