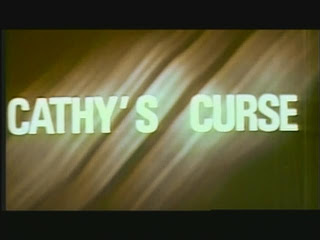 “Well, if it isn’t the great medium herself! Medium? More like extra rare piece of shit!” 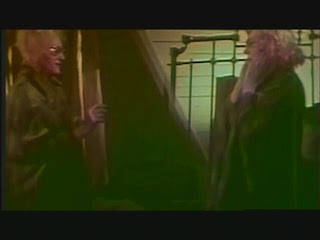 A father comes home to find his daughter alone. She tells him that her mother has taken her brother and run off. The furious father takes his daughter and speeds off in pursuit of his wife and child. They don't get far before the father loses control of the car when he swerves to miss a rabbit and crashes. The car bursts into flames and they both die. 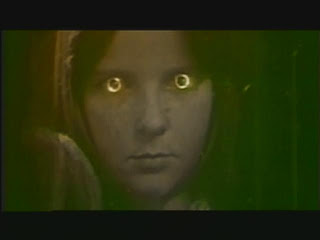 Twenty years later the brother all grown up moves back into the fathers house with his wife and daughter. Their not there long when the daughter, Cathy finds her dead aunt's favorite toy in the attic. A ratty old doll with it's eye sewn shut. Before long Cathy is possessed by her dead aunt and starts causing all sorts of mischief. Like breaking a statue. Making her mom's food rot and tossing her nanny out a window. A nosy medium stops by and tells mom about the accident that killed the father and daughter. Meanwhile Cathy entertains the local kids by playing a game of accident. Were the reenact that same accident that killed her aunt. Afterwards she pokes one of the kids in the eye. The Mother starts to notice somethings up but she did some time in an asylum so her husband thinks she might be losing it again. he ends up sending her back to the asylum. The old drunk caretaker also starts to suspect that something is up. The medium stops by a couple more times and Cathy lays the smackdown on the nosy old woman she goes running out of the house. This part was great because of the amount of curse words Cathy lets fly. Like,“fat dried up old whore.” Which had me laughing. The only thing that would have made this better was if the medium fled the house Munsters style. All sped up with whimsical music. eventually mom comes back and faces off with Cathy who gets all freaky looking. Mom faces off against possessed Cathy in a booze bottle shattering climax. 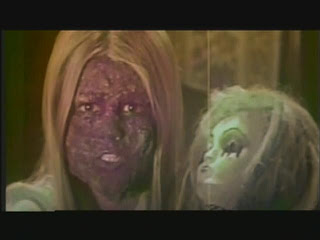 Cathy’s Curse really hit the spot. this is one bat-shit crazy movie. I loved everything about this sucker. Cathy's consent swearing. the scene were the statue gets shattered by Cathy's power was a winner. Simply for the fact that the old nanny goes to clean up the mess, picks up like three pieces and says she's all done. What?! All done there's a whole fricking mess there and your all done. Don't expect a Christmas bonus lady. The aforementioned scenes were Cathy faces of with the medium are defiantly highlights. The amount of verbal abuse Cathy heaps on the poor woman is hilarious. Is your in the mood for a evil possessed child flim filled with cheese,Cathy’s Curse more then fits the bill. The only issue I had was with the quilty of the picture. The DVD I have is taken off of an old VHS. The picture is oranger then orange and appears to have been filmed underwater.