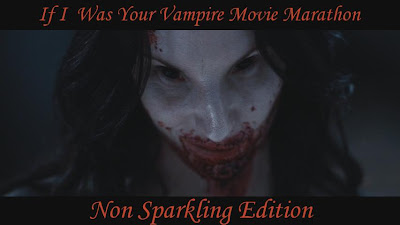 So it was just another Friday night. Tired from work I tried as always to make up my mind what to watch for my typical Friday night movie viewing. So I flipped through a stack of unwatched DVDs trying in vain to come to a decision. Then I looked at the case to something I'd passed up a few times a little film called... 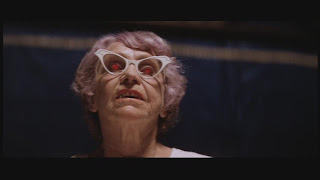 The film opens with a woman waking up in a coffin. The coffin is in a musty crypt of sort. Franticly she tries to escape, but is locked in. The woman is being watched by a group of people on a monitor. The woman Kate (Chantal Contouri) is a descendant of Elisabeth Bathory. The people watching her are a cult that have a great destiny in mind for poor Kate. They hope to convert her to their ways of vampirism by any means necessary. 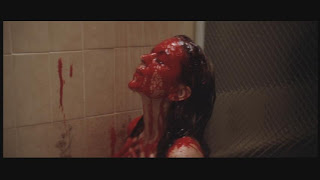 An modernization of vampires. The vampire cult is more like a corporation. They have a farm were they "milk" humans for their blood. The blood is packaged in milk cartons and sent to vampires living all over the world. A tad slow in spots. It heats up here and there, but there's too many talky parts that drag on the forward momentum of the film. Another problem was the characters. There's not enough too them for us to identify with them. Kate never came across as someone that I'd care about her ultimate fate. The villains of the film played by Shirley Cameron as a sinister cult member. Henry Silva and David Hemmings as a couple of evil doctors are much better. Their much more interesting then protagonist but we never learn much about them. What motivates them individually. 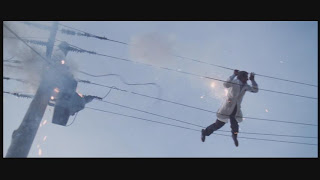 Thirst isn't bad. It's got plenty of cool ideas about modern vampires. It's loaded with surreal scenes when the cult is using brainwashing techniques on Kate to turn her. There's a rocking score by Brian May. And a cool Omen style death. But the slow spots and flat characters never really made the film take off for me.

So Thirst while interesting left me a little meh with my viewing experience. Surprising for a Friday night I wasn't dead tired by the end of the film. I felt up for another flick. I looked though a few DVDs and found another vampire film I hadn't seen. Then it struck me, I have a bunch of vampire films I havn't watched so why not make it a whole weekend marathon. With that in mind I popped in...

"You keep away from here, or we'll set the dogs on you!" 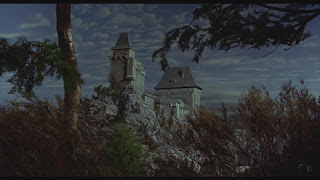 Gerald and Marianne,a young couple traveling Europe for their honeymoon break down in a small village. The village is overlooked by the castle of the Dr. Ravna. The village is one of those typical superstitious don't trust strangers type of places. The ones that horror movies set in Europe seem to be full of. The couple aren't there long before Ravna invites them up to the castle. Dr. Ravna is the head of his own cult of vampires and he wants Marianne. She gets taken by the cult and Gerald seeks the aid of local vampire hunter Dr.Zimmer. 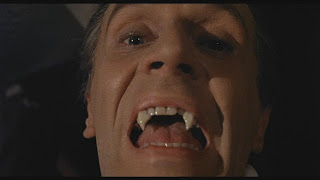 The film starts strong with a cool vamp staking scene and then gets a little slow as we meet the young couple. But once they go to a party at the Castle things start to pick up. The sets and costumes as usual for a Hammer film are lush. Ravna and his cult make for interesting villains. Dr.Zimmer is a fine stand-in for Peter Cushing's Van Helsing. A bit of a drunkard vampire hunter but combatant none the less. 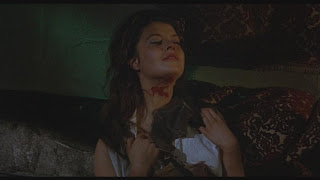 One thing that really hurt the movie was the dull first half. But once we get to the vampire action, the pace gets brisk. From there I had a blast with it. Though be warned, there's a ridiculous scene with fake bats. I nearly lost it in the climax of the film. During the all-out bat attack that just has to be seen to be believed. It literally looked like stage hands were whipping large rubber bats at the cast off camera. Hilarious.

That did it for Friday night. Really after that bat attack that's all I could take.

" A vampire, in ancient belief, was a malignant spirit who when the earth lost its sunlight rose nightly from its dark grave to suck blood from the throats of the living." 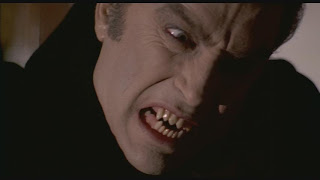 After some spooky narration at the beginning the film switches to a groovy seventies séance. Yorga is holding it at some chicks house to contact her decreased mother. When the séance ends Erica and her boyfriend Paul give Yorga a lift home. The couple's van breaks down outside of Yorga's mansion. So they decide to stay there the night and make sweet loving in the van. Well the van is a rocking and Yorga comes a'knocking. He puts the smackdown on Paul and bites Erica. It doesn't take long before Erica starts doing weird things like eating her cat. Paul and his pal Dr. Hayes start to suspect that Yorga's a vampire. Their faced with possibility of having to confront an undead fiend. 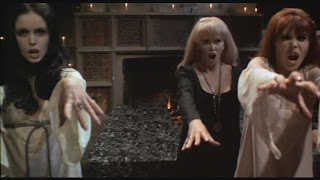 The Count is a whole lot of 70's drive-in fun. I saw this film once as kid on the late show. Back then it seemed sort of creepy. I think the low budget added to the creep factor when I was young. Now it's more of a cool cult thing. It's always entertaining to see the vampire in modern setting sort of story. Defintily good on a double bill with Blacula or Dracula A.D. 1972. 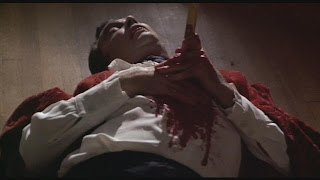 "There is no escape. No hope. Only hunger and pain." 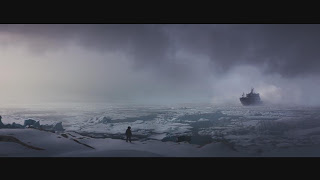 As the annual "30 Days of Night" descends The town of Barrow, Alaska. Sheriff Eben Oleson has to deal with someone burning all the cell phones and killing all the town's sled dogs. He also has to deal with his estranged wife, Stella who misses the last flight out of town. Soon a strange man responsible for the killing the dogs is caught. The stranger warns them that death is coming to town. As this is happing the vampires begin attack various places around town. Oleson, his wife and a handful of other have to survive till the 30 days night end. 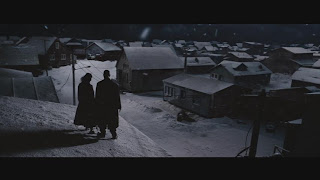 What a difference a second viewing can make. When I first watched this one when it came out on DVD it really did nothing for me. For whatever reason this time the movie clicked for me and I really dug it. There's some beautiful cineamatorghy in this movie. The shot of the ship coming in and the attack on the town are something to behold. At two hours in length it never drags or lets up on the tension. 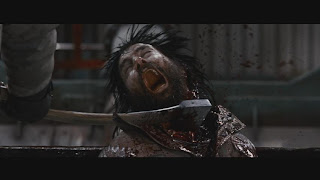 I've never read the source material the films based on but from what I've seen of the artwork the film does fine emulating the comics style. Only a few things bugged me. One was the old man and his son. I'm sorry and this may be a bit harsh, but if I'm hiding in an attic in a town overridden by vampires who will kill you in an instant, a babbling old man who could give away our position is getting smothered with a pillow. The good of the many and all that. Another was how long were these guys just sitting around hiding from the vampires and how much food did they have on them? But those are minor nitpicks. The film is a very basic horror survival story that works thanks to a fast paced story, lots of gore and a nice stylish look. 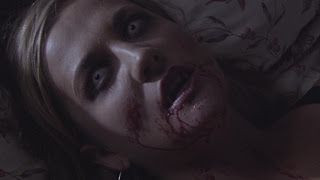 Gangstas, a dysfunctional family and some vampires all meet up when a slumlord gets bitten by a vampire and goes home to turn his family into vampires. Some gang members fleeing a drug deal gone wrong end up at the house with the vampires. Soon all hell is running rampant in suburbia as nearly everyone is turned into a bloodsucker. 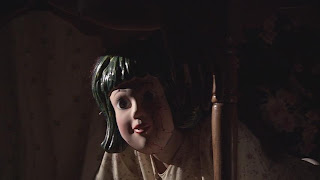 For what most likely was a tiny budget they ladle on the gore and vampire violence. But the film breaks down to just one vampire attack after another. While not a bad thing, there's nothing else in-between the attacks. The vampires play more like blood drinking zombies. Second vampire movie of the night with vampire on cat violence. The vampire dad's acting is a hammy treat. It does have naked lesbian vampires though. So I guess that's something. 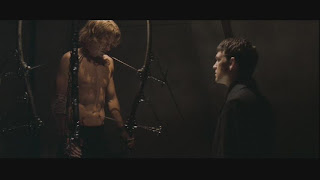 In an alternate reality, human and vampire co-exist. The vampires are male only. No female vampire has ever been born. They have become a religious institution known as The Brothers. The Brothers need donations of human blood to survive and in turn The Brothers healing blood is offered to the faithful as sacraments in church. Edgar a brother who has gone mad attacks humans for their blood. Brother Silas and a human policewoman Lilly are teamed to hunt down Edgar before he chows down on to many people. Unknown to everyone but Edgar, his blood carries a terrible plague that could wipe out every human on earth. 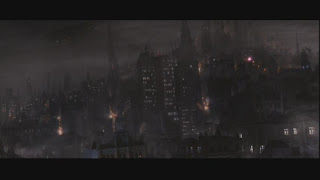 A fairly moody science fiction vampire flick. The set an coustume desgin reminded me a little of David Lynch's Dune. This was fairly good scientific take on vampires. There was some nice touches like the retro tech and the city's look. Not one you'd want to watch more then once a year. The ending sets it up for a sequel.

Not too bad as far as movie marathons go. Not as much fun as the werewolf one. I had a decent enough time though. I own enough vampire movies for another go some day. Till then...

Posted by Professor Brian O'Blivion at 12:00 AM