10 Questions: An Interview with Calabrese 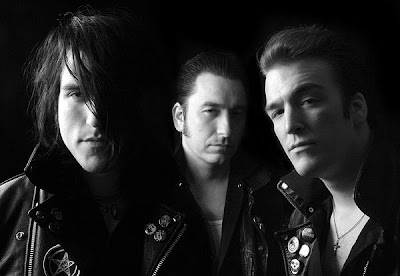 Calabrese is a band that displays the same passions that the Cathode Ray embodies, basically a love of horror, comic book art, and kick ass rock n’ roll. After you read this I guarantee you will become as big a fan of Calabrese as we are at the ‘ol Ray!


1-Please tell our readers a little about your band.

Bobby - Hey, we’re Calabrese, and we’re a horror rock and roll band from Phoenix, Arizona. It’s all a blur at this point, but I think we started 6 or 7 years ago, but we’ve been tearing through dirty bars and seedy venues ever since.

2-Arizona seems to be a hotbed for the horror rock sound. What do you feel it is about your location that is leading to all this incredible music?

Bobby – Maybe sitting in the heat all day is frying our brains and making us write weird and creepy music! Or we all just collectively wanna write the next “How the Gods Kill.” I dunno, everyone from Phoenix is originally from somewhere else…so I’m gonna guess that there’s some weird, magnetic pull deep under the ground, attracting us all to the hottest, most Hell-like location in the US.

3-One of the things, besides the awesome music, that I find so appealing about your band is the incredible artwork you use. How do you select what artists to use?

Bobby – We have no real selection process, just more of a, “Hey, that guy’s shit is awesome…let’s get him to do a shirt!” We’re pretty hell bent on amassing a giant collection of art, so anyone can have a decent opportunity to fill up their Calabrese Shrine they keep in their closet. 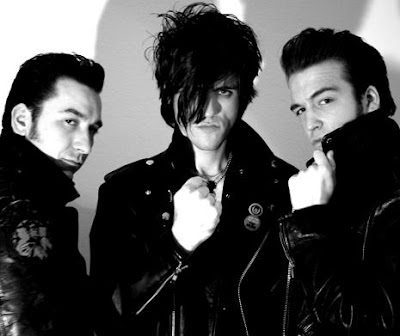 4-You guys have some really great merch as well. How do you decide what merch to create? Do you design it all yourselves?

Bobby – We decide and design everything ourselves, but I think KISS has a huge hand in helping us figure out what we want to sell. Which, in KISS style…is everything! No panties or lunchboxes just yet, but we’ve got enough t-shirts to clothe a small village and a kick-ass comic book on its way.

5-What is the story about? Any chance for guest artists to contribute pin-ups (I think a Dan Brereton rendition of Calabrese would be killer...)?

Bobby – Well, the story is about us…and monsters! We’re hunting monsters and demons on our own, but when we slip up, the government swoops in and blackmails us into doing their own killing. It’s pretty cool stuff in the vein of Hellboy. Never thought about a pin-up section, though. Something to think about!

6-Brian Pulido directed your amazing Voices of the Dead video. How did that come about? Were you big fans of his comic work (Lady Death, Evil Ernie)?

Bobby – We played a show at Atomic Comics, which was just a fun night of fun zombie games and Halloween costume contests. We love comics, and fully endorse all things Marvel, so it’s been one of our favorite yearly events. So Brian Pulido was there, as a judge for the short zombie movie competition, he saw us play, liked what he saw…and it’s been a rock and roll fairy tale ever since! And yeah, I was into Evil Ernie when I was younger. It reminded me of a Johnny Ramone looking sociopath! 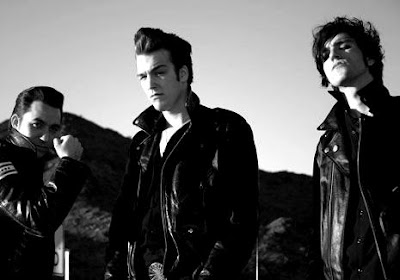 7-I know you did some work for the movie "The Graves". Any chance of a Calabrese movie (maybe in the vein of Guitar Wolf's Wild Zero)?

Bobby – Nothing in the works, but that would be awesome! I can die a happy man if I’m featured in a movie where I get to take down an alien spacecraft by slicing it in half with my guitar. Take note, Spielberg!

8-You mention red wine as an interest. I am a big wine fan myself. Any recommendations?

Bobby – Anything that comes in a fancy bottle! So when you’re done, you can put a black rose in it, throw it on a coffee table and drive the goth chicks wild.

9-Obviously you are a fan of the horror genre, What are your top 5 horror
movies?

10-Any final words for our readers?

Bobby – Yeah, get ready for the new album in 2010! I think the world will implode once it hits stores. Or just blow your brain outta your ears!

There you have it! Do yourselves a favor and head over to www.myspace.com/calabrese to learn more and hear some killer music! 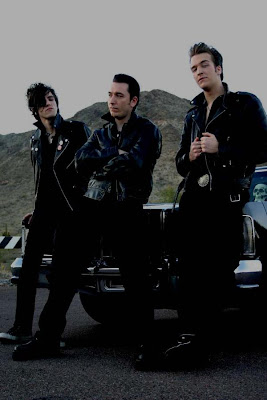 Posted by Professor Brian O'Blivion at 12:04 AM