In space no one can hear you go WTF! 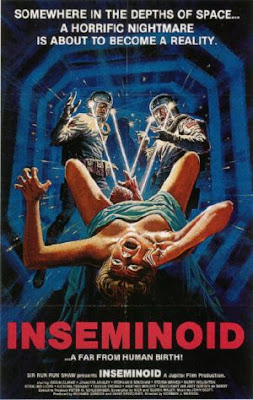 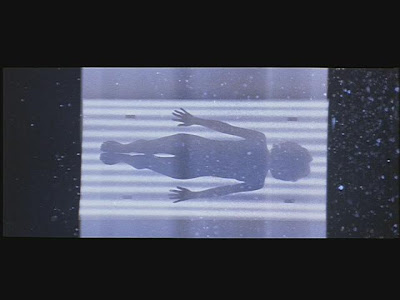 I have a soft spot for 80's films that are a rip-off/homage to Alien. Alien it's self is one part It! The Terror from Beyond Space (1958) and one part Planet of the Vampires (1965). Films like Contamination (1980), Xtro (1982) and Creature (1985) are some of the best at imitating Alien in one way or another. Plus they were fun to watch. So when I found the DVD of Inseminoid this weekend I couldn't resist it's siren's call. In one of those futures that only happen in films like this a crew of explores is sent to some planet to look for...I'm not really sure. But anyway what they do find are some funky crystals. The crystals drive one dude bonkers. After a little fracas he ends up dead along with another crew member. Then Sandy (Judy Geeson) is attacked and impregnated with a tube by a very phallic alien. She's brought back to the base and after a bit goes bat-shit crazy and starts offing the rest of the crew and sometimes eating their guts. Why? I guess to feed the baby alien inside her. 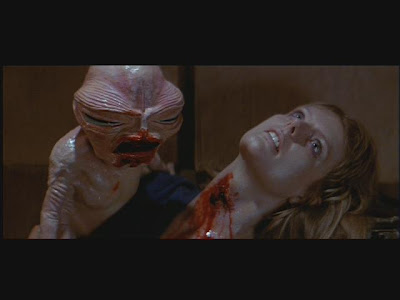 Directed by British horror guru Norman J Warren, who in the late 70's made films like Satan’s Slave (1976),Prey (1977) and the Susperia "homage" Terror (1978). Inseminoid isn't the sleaze fest that big penis looking alien on the cover would lead one to believe. I mean it does have it's sleazy moments, like the impregnating scene. But most of the time when there's no Sandy on screen killing it's a bunch of talk and running thru dark caves. The scene were Sandy gives birth is ridiculous beyond belief. It goes on for what seems like hours with Sandy screaming at the top of her lungs. The screaming was so damned loud I had to turn it way down as to not wake the neighborers. Then Sandy gets a relived look on her face and you think it's done and you can turn up the volume, she starts screaming again. Out pops another kid. Two penis aliens. Great. Geeson seems to be into the role, playing it with gusto. She's one of the film's best parts. Not very scary looking though. I really enjoyed the score by John Scott. Lots of 80's horror synthesizer. I'm also fond of those funky space suits. Straight out of a cheesy Italian post-apocalypse film. I dug the end credits too, showing you the characters and how they bit the dust. Inseminoid is somewhere in the middle. Not sleazy or bad enough to be a epic bad film and not really good enough to be legit. Worth a viewing if you like Alien rip-offs and bad space suits.

I all sorts of couldnt stand this flick after I picked it up for the same reason. Got to see it for a second time though to figure out whether or not it was as bad as I thought it was initially. Be sure to check out Mutant if you get a chance, its supposed to be a very good Alien knock off, but be SURE to get the Forbidden World version, and not the Night Shadows version of the Mutant title. There is a version of the DVD for Night Shadows floating around with the cover art from Forbidden World, its a total misleading cocktease

My friend Dan felt the same way as you about this movie. He couldn't stand it. Even warned me not to see it. But I couldn't resist. I'm somewhere in the middle on it. Nothing I want to watch a lot. But there was a few things I liked. Thanks for the info. I've wanted to see check that movie out for some time.