Do what thou wilt shall be the whole of the Law "Aleister Crowley, born Edward Alexander Crowley (pronounced /ˈkroʊli/), (October 12, 1875 – December 1, 1947), was an English occultist, writer, mountaineer, poet, possible spy and yogi. He was an influential member of several occult organizations, including the Golden Dawn, the A∴A∴, and Ordo Templi Orientis (O.T.O.),and is best known today for his Magickal writings, especially The Book of the Law, the central sacred text of Thelema. He gained much notoriety during his lifetime, and was dubbed "The Wickedest Man In the World."
Crowley was also a chess player, painter, astrologer, hedonist, bisexual, drug experimenter, and social critic." 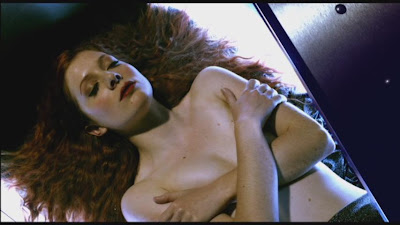 The film starts in 1947 as two young male collage students are meeting with Crowley when he up and dies. Present day and some scientists are experimenting with some virtual reality memory machine. Something goes wrong (Doesn't it always) and timid professor Haddo (Callow) is merged/possessed by Crowley. Timid no more he becomes confident and a total sex maniac with a penchant for peeing on people. However he needs 12 disciples and a sex magic ritual to be completely reborn. A visiting American scientist and a female student figure out what is going on and try to stop him. 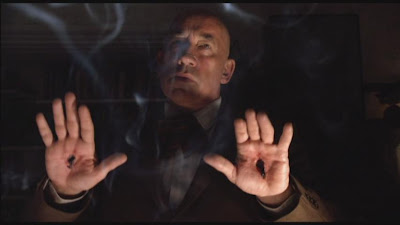 Bruce Dickinson,frontman of Iron Maiden knows his Crowley. He's been trying to get it made for many years. While not a bio-pic it throws in lots of facts about the man. Dickinson uses it to add to the overall story and paint a very colorful portrait of the man. He's greatly aided by the man playing the title role. 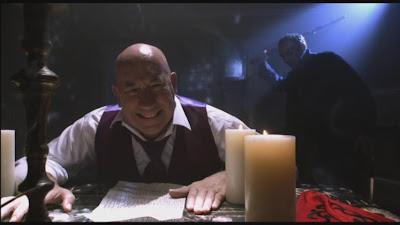 Simon Callow as Crowley easily owns the movie and dominates every scene he's in. He's obviously having fun playing good old Aleister. The rest of the actors due fine but as I said Callow blows them all out of the water. My favorite thing about his performance was seeing how far and how outrageous he'd get. 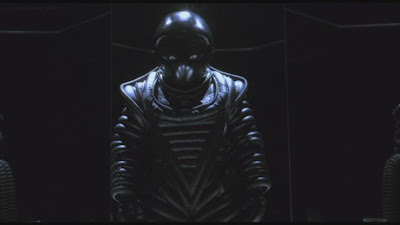 Speaking of outrageous you get tons of sex. Plus as Joe Bob Briggs would put it you get Shit fu,Piss fu and jizz/fax machine fu. The film throws some crazy stuff at it's audience. The only real problems are that the pace lags a little when Crowley isn't on screen and the science plays like a bunch of Star Trek techno-babble. These issues don't hurt the film to much. There's a fun air to Crowley and it plays like a Dr.Who/X-files hybrid with the sex amped up.

I wanna check this one out too, its been coming up often on the boards and sounds very interesting