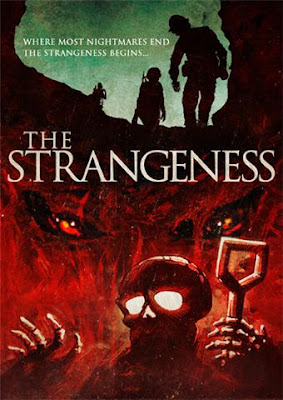 Finally coming to DVD on On August 18th.

"It is 1980 and the price of gold is soaring. Old timers warn would be prospectors to stay away from the Gold Spike Mine. It has stood as a ghastly reminder of the horrors of a century before when the earth violently shook and over twenty miners were killed, their bodies stripped of flesh. The residents of Basin City talked of the grisly murders only in whispers from which legends of The Strangeness grew. A small group of explorers innocently make their way to the Gold Spike. Only one knows the incredible secret of the mine, and here the nightmare begins.....! NIGHTMARE USA's Stephen Thrower described the film as having, "Ominous atmosphere, flashes of humour, and a truly startling monster!" Shot in 16mm, Code Red presents the film in 16x9 widescreen (as requested by the director) from a HiDef master. Extras include 6 short films from Chris Huntley and Mark Sawicki; audio commentary from Sawicki, Huntley, and the director; on camera interviews with all three; and an extensive still gallery. MSRP is $22.98."

Posted by Professor Brian O'Blivion at 12:06 AM

Code Red isnt out of business?? Sweet! Maybe its BCI that was going down.. cant remember.. Looking forward to the release!