Midgets with the machine guns 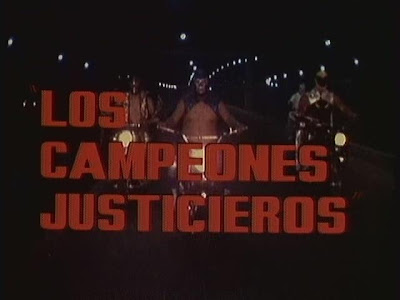 The Champions of Justice (1971) AKA: Los campeones justicieros

"I can't believe it. Those midgets have a supernatural strength."

Every once in awhile a film comes along that while watching it makes you say "This is why I watch crazy ass movies." Champions of Justice is such a film. There's masked wrestlers (luchadors), a mad scientist and killer midgets! All accompanied by a funky ass score. 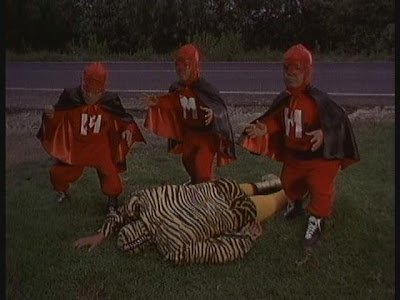 Black Hand (Silva) a mad scientist and agent for unnamed foreign powers is released from prison. Blue Demon and his pals sent Black Hand to the big house some years ago.
Naturally he wants revenge on Blue and his luchador pals so he sends his crack squad of killer midgets to make the luchadors lives difficult. To add to the troubles he gives the diminutive death squad super strength. Helping them is the masked luchador Black Shadow a long time foe of Blue Demon. The Black Hand also kidnaps the wrestlers nieces, who are taking part in the Miss Mexico pageant. The girls get frozen as part of some crazy mind control experiment. This leads Blue and the guys into a super powered midget trap in their attempt to find the girls. This leads to many a midget getting tossed during the films big beat down climax. 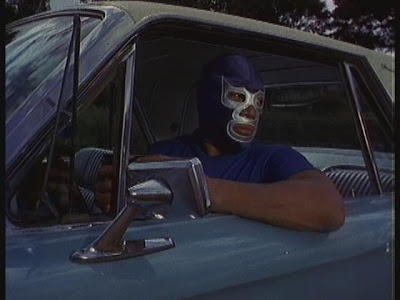 Blue Demon and his buddies cruse around in some cool 70's cars and motorcycles. All the while wearing their masks. It's crazy seeing them dressed up in swank 70's clothes and three piece suits while wearing those masks. From what I've read though El Santo wore his mask all the time in public even after retiring. He was even wearing it when he was buried. Their dedication to their sport and the honor the luchadors held for their masks was truly amazing. 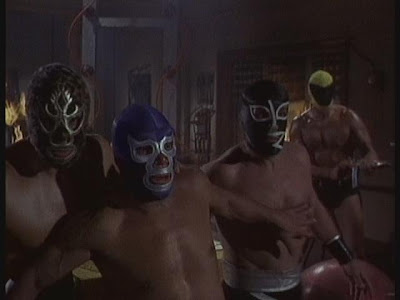 This film was a real treat. This was my first real experience with the lucha cinema of Mexico, and boy did it rock. Lots of cheese is the order of the day. Mixed with tons of action. Car chases. Skydiving. Scuba diving. Scantily clad women. 007 style gadgets. A cool 70's dune buggy. Midgets. A crazy mad scientist lab and lots of wrestling smackdowns for the villains. The only department it's lacking in is monsters. But considering all that's in this film I don't know if they could have fit'em! 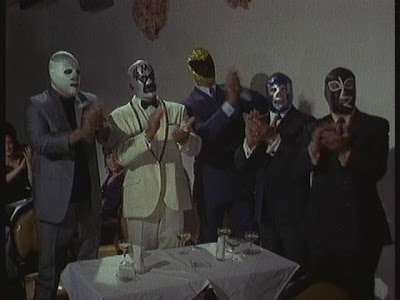