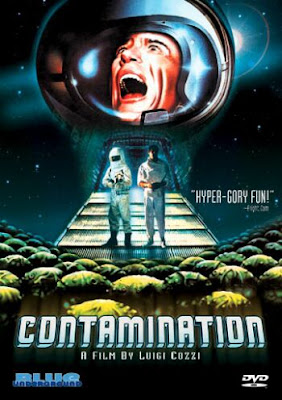 "If you're always in that condition, it's obvious you couldn't get it up, even if you used a crane." 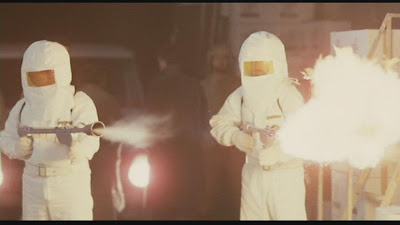 The sweet haze that nostalgia brings. Contamination is by no means a "good" movie, but having seen it long ago on Elvira's Movie Macabre back in the 1984 it's kind of nice memory for me. As much as you can have a nice memory about a film were people's guts blowing out of them. at the time I really could not believe the crazy ass film I was seeing. Eggs that made you explode? Who the hell would make a movie like this? How did they get away with playing this on T.V.? 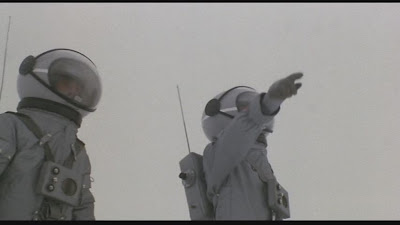 A derelict cargo ship, The Caribbean Lady drifts into New York harbor. A team of Scientists and a cop, Lieutenant Tony Aris (Masé) board the ship and find the dead and badly mutilated crew and strange green eggs. Eggs that pulsate and moan. When one scientist picks up a egg it explodes. The goo from it kills every one but Tony, by making their guts explode out of them. Tony is whisked away to a top secret government building were he meets Colonel Stella Holmes (Marleau) a real icy bitch. After a raid on a warehouse full of those eggs she happens to recall a mission to Mars were one of the astronauts claimed to have seen similar eggs in a cave. Really you forgot that? Hell, she was the one who discredited the astronaut. So she goes off to meet him. She finds Commander Ian Hubbard (McCulloch) drunken and bitter. Soon it's off to South America for the trio of Stella,Ian, and Tony to track down the coffee company that sent out the cargo ship. Can they stop the egg invasion and who'll make it to the end with their guts intact. 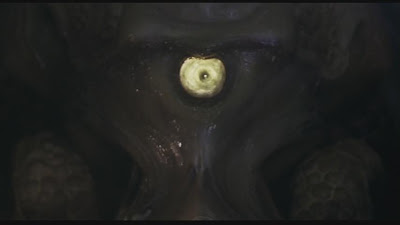 Contamination is dumb, gory fun. Filled with unintentionally hilarious dubbing. The movie slows to a crawl at the middle section. When our heroes travel to South America. This is due to the failed attempt at a love triangle and that there's no guts blasting out. The beginning with the cargo ship and the warehouse raid are cool and the ending with the "mastermind" behind eggs is boffo. If only Cozzi could have kept up the exploitation antics in the middle half. Goblin as usual provides a good score. The effects range from decent (The cyclops) to poor (Some of the chest bursts). The acting is hard to judge since everyone is badly dubbed. But Ian McCulloch and Marino Masé come across as likable fellows. 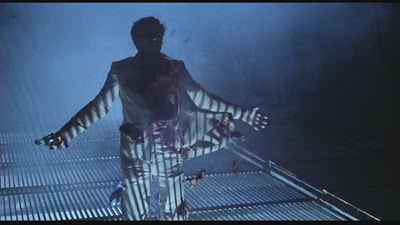 Speaking of Ian McCulloch, it's probably not a good idea to star in a movie with him, unless your the leading lady. Because if I've learned anything from watching these Italian horror films is that Mr. McCulloch's co-stars always die horrible deaths. See Dr. Butcher M.D. (Zombie Holocaust) and Zombi 2 for further proof. All together a fun Alien rip-off. Just have some caffeine on hand for that boring ass middle section.
Posted by Professor Brian O'Blivion at 9:53 PM

I think your thoughts on this one mirror my own. It does drag in the second half, but overall I enjoyed it for what it is--cheesy Italian splatter.

I couldnt even enjoy this one for the ridiculous gore, it was too few and far between and I just got irritated with the terrible exposition. I actually found myself wishing for Creature or Inseminoid to pop in =D

Isn't it amazing that the mere presence of Elvira before a movie can make it seem that much better?