10 Questions: An Interview with Writer and Freelance Director Paul Kyriazi 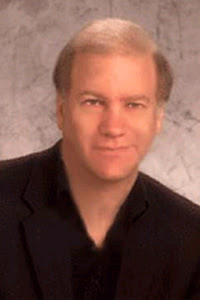 I recantily talked to Writer/Director Paul Kyriazi about his classic cult film Death Machines (1976) and his filmmaking career. 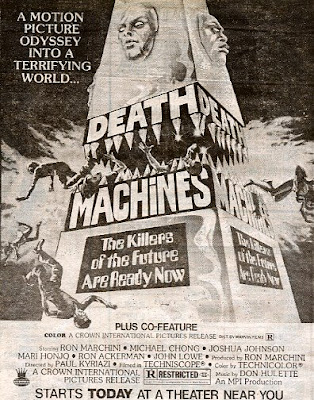 1-How did you first get into filmmaking?

When I was eight years old I saw 'The Making of 20,000 Leagues Under the Sea' on Disnyland TV. They showed the story boards and the actors talked about working on the movie. Right then I knew I wanted to make movies. In high school I made 20 minute 8mm action stories with my friends. In my college film department, I made 16mm action movies. Two of them won the Berkeley film festival. Then I financed my first low budget feature film, shot in 35 mmTechniscope and kept going from there.


2-There's a scene were one of the killers (Ron Marchini) escapes from a police station and crashes into another car. You were driving the other car. What was it like doing the stunt yourself?

I remember doing that vividly. We couldn't afford a stunt man in that scene, so the producer / star Ron Marchini would drive the car that rammed into me.

It was on 'Mother's day. I told my cameraman friend, "If anything happens to me, call my mother."
I was roped into the driver's seat at tight as it could be, as the car didn't have seat belts. Now I realize what a stupid thing that was. What if the car caught fire?

On the first take I drove too fast and the car that was suppose to hit me, didn't get there on time. Everyone laugh and blamed me for being scared and escaping the car. That might have been true. The next take was perfect as Ron hit my car right on the door opposite me. Wow, I can still remember the shock of that hit.

Then Ron said we should do another take with my car stationary to get a better sliding of the car after the impact. I sat there as he raced toward me and hit me. I was glad it was over. Someone yelled, "Paul Kyriazi, stunt man Extraordinaire". But I was glad it was over. Now I realize it was a stupid thing to do just to get the stunt. But that's how involved I was in making the movie as good as possible.

3-What was it like working with Mari Honjo who played the evil Madame Lee?

We found Mari Honjo at a casting agency in San Francisco. At that time, there didn't seem to be too many Asian actresses available. But we had a choice of about five of them and she seemed the most determined and had a strong look when she played angry. I remember clearly that she was a good sport and followed direction perfectly. Never a problem. Always professional. I remember being shy about telling her to get turned on as she watched her three killers fight off their opponents in that first scene, but she got what I meant, and acted sexually excited.


4-And have you seen this website about her? Where is Mari Honjo?

Yes, I have and I corresponded with her ex-husband who put up that site. He asked me if I knew where she was, but I didn't see her after filming. Not even at the premier. Very mysterious that she might be pretending she was someone else. Maybe she took the part in the movie to the extreme and continued her role after we wrapped. 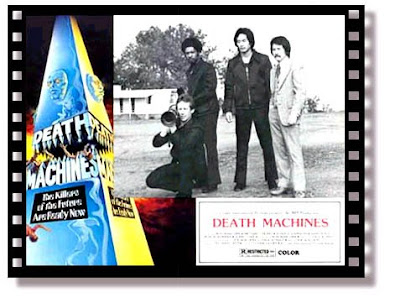 5-Crown International Pictures who picked up the film wanted to make it a sci-if movie and you filmed a new opening correct?

Yes, that's right. At the time Crown picked it up the sci-if movies, 'Rollerball' and 'Death Race 2000' were popular, so they wanted to put a sci-if slant to 'Death Machines', which seemed really ridiculous to me, but they wanted to distribute it that way, so I directed the opening sequence a few months after the main filming.


6-I've read that Kung Fu kata champion Eric Lee was to be original Asian killer. But Sam Peckinpah wanted him to work on The Killer Elite (1975) so he took a smaller role as the karate instructor at the dojo the killers attack. True?

Yes, that's true. We were a few weeks away from filming and Eric called and said he had the Pechinpah movie opportunity. I told him right away to take it. Eric then told me about Mike Chong who was also a Kung Fu Magazine 'cover boy'. Eric and I became great friends and made two other features together. Recently he did some voices for my audio-book.


7-The evil mastermind in the shadows and the ending left it open for a sequel. Was there ever any plans to make one?

Yes, you guessed it, Shane. That's exactly why Crown told me to keep the guy in the shadows, so if there was a sequel we wouldn't be stuck with that actor. Any actor could replace him. But alas, no sequel. The movie made a profit everywhere it went around the world, but not enough to warrant another production.


8-The films trailer is very interesting. It further stresses the sci-if angle and makes it seem like the film takes place in the future. Did you have anything to do with the trailer or was that Crown?

No, I didn't. And sadly, the sci-if angle kept many martial artists away and angered the sci-if crowd that went to see it so much that kung fu shots had to be added to the newspaper ads. To bad the posters weren't re-done as well. The movie opened in 50 theaters in Los Angeles alone, and could have really done big at that time if it were for the phoney sci-fi angle.

9-Can you tell us about some of the other films you've done?

I followed up with two other martial arts movies. My best was 'Weapons of Death' that I shot in panavision starring Eric Lee and a large cast. After that I worked with Eric again on the comedy 'NinjaBusters'. Next came a cop movie 'One Way Out' followed by 'Omega Cop' once again working with Death Machine's Ron Marchini. That one co-starred Adam West (Batman), Troy Donahue, and Stuart Whitman.

10-Any advice for aspiring filmmakers?

I believe in Woody Allen's advice for filmmakers, "80% of it is showing up." I have seen with my own eyes over the years that actors and crew members who show up and do whatever job is asked of them end up continuing in the business. I also suggest , to expand your mind from 'the movie business' to the 'communication business'.

To survive between film jobs work in all aspects of the film and communication business. That's why I got into novel writing, then producing them as audio-books with stars like Rod Taylor and Robert Culp, and then, because of that, back into the movie business. Yet in my mind I was never out of it.


Thank you for taking the time to talk to me.

It's been a pleasure, Shane.